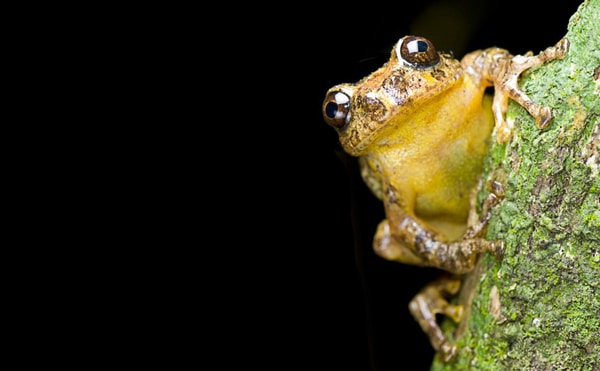 A frog long thought extinct was rediscovered in 2007 in India and has now been fully described in the PLOS One Journal. Franky’s treefrog (Frankixalus Jerdonii), as the frog is now named, was rediscovered by accident by biologist Sathyabhama Das Biju of the University of Delhi, who was surveying a forest in India’s Nagaland region nearly 10 years ago. The frog was last seen 137 years ago. Biju and his colleagues were seeking out ground dwelling amphibians but looked to the trees whey they heard what he described as a full orchestra as the frogs were calling. 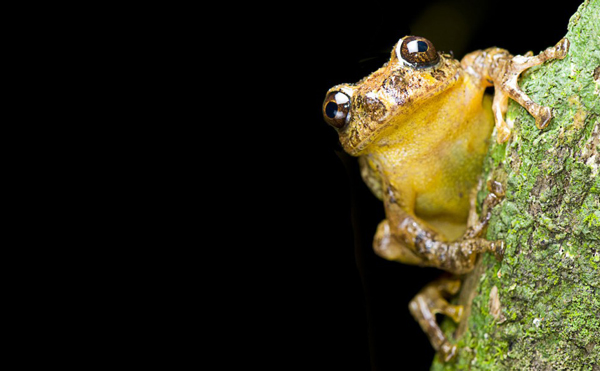 The proposed common name for the newly described treefrog is Franky's tree frog.

Biju and colleagues (Sonali Garg, Gayani Senevirathne, Stephen Mahony, Rachunliu G. Kamei, Ashish Thomas,Yogesh Shouche, Christopher J. Raxworthy, Madhava Meegaskumbura, and Ines Van Bocxlaer) then spent the next several years collecting and studying the frogs, and during his field of study, he noticed some peculiar aspects of the frog. The frogs live and breed in hollowed out canopy tree trunks that hold water. Males are 37.1–42.1mm snout to vent while females are larger, at 46.8mm.

After the female lays its eggs, the mother returns to the tadpoles and lays unfertilized eggs that the tadpoles eat. This ws evidenced by an analysis of the tadpole stomach. This behavior, called oophagy isn’t a unique trait among Indian tree frogs. Further study led Biju and his colleagues to create a new genus to describe the frog, as phylogenetic analyses of the frog detailed a distinct evolutionary lineage of the species. 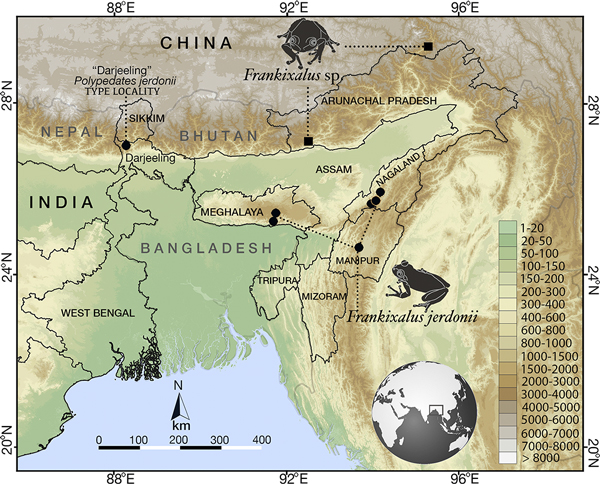 Localities in which Franky's tree frogs were found in India.

Although Biju detailed an abundance of Frankixalus Jerdonii in the localities surveyed, he does note that slash and burn land clearing practices, known locally as jhumming, which is employed to grow crops, will remain a threat to the species. He also noted that a population of the frogs at Cheerapunjee in Meghalaya state lived in a secondary forest in which the highly polluted Wahlynkien stream flowed.