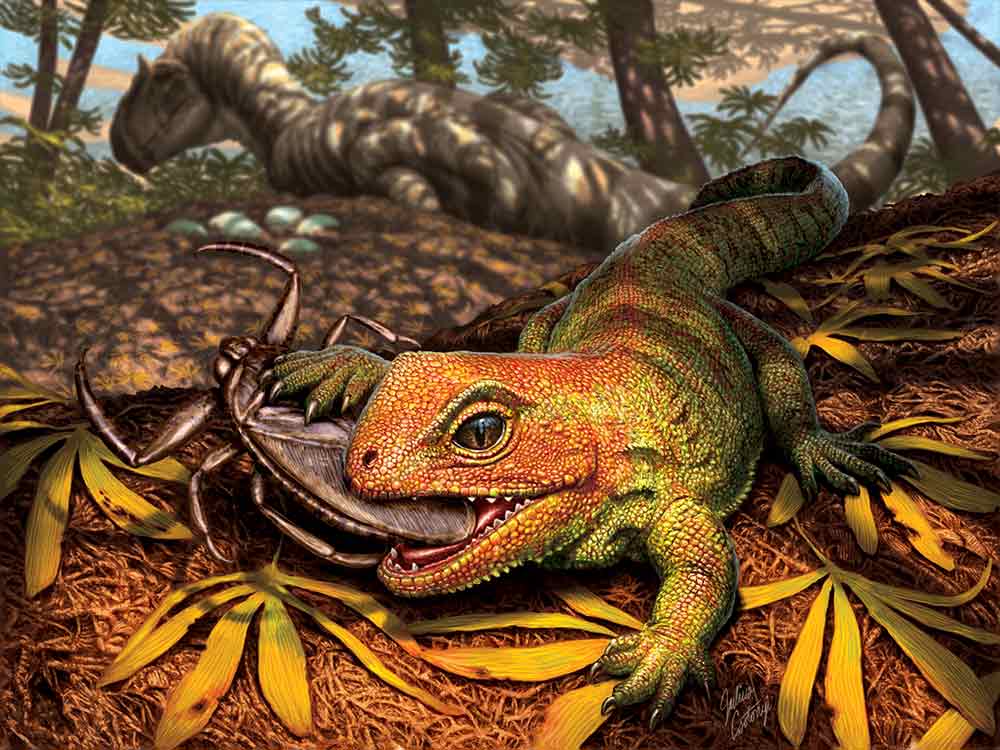 Opisthiamimus gregori was about 6 inches in length from nose to tail and is believed to have fed on insects and other invertebrates.

Researchers with the National Museum of Natural History have discovered a relative to New Zealand’s tuatara that lived more than 150 million years ago in what is now North America. The reptile, which is not a lizard, but rather a rhynchocephalian like the tuatara, lived among dinosaurs such as Stegosaurus and Allosaurus. The rhynchocephalians diverged from their lizard cousins more than 230 million years ago.

Opisthiamimus gregori was about 6 inches in length from nose to tail and is believed to have fed on insects and other invertebrates.

“What’s important about the tuatara is that it represents this enormous evolutionary story that we are lucky enough to catch in what is likely its closing act,” Matthew Carrano, National Museum of Natural History’s curator of Dinosauria said in a statement released to the media. “Even though it looks like a relatively simple lizard, it embodies an entire evolutionary epic going back more than 200 million years.”

Opisthiamimus gregori is described from several specimens found in northern Wyoming’s Morrison Formation. One of the specimens is a complete and well preserved specimen that was found in an Allosaurus nest, the researchers said.

“These animals may have disappeared partly because of competition from lizards but perhaps also due to global shifts in climate and changing habitats,” Carrano said. “It’s fascinating when you have the dominance of one group giving way to another group over evolutionary time, and we still need more evidence to explain exactly what happened, but fossils like this one are how we will put it together.”

The researchers believe that based on the small size, tooth shape and rigid skull, it likely ate insects as well as beetles and water bugs. It looks like a miniaturized version of the tuatara, the only living rhynchocephalian in the world.

The complete paper, “A nearly complete skeleton of a new eusphenodontian from the Upper Jurassic Morrison Formation, Wyoming, USA, provides insight into the evolution and diversity of Rhynchocephalia (Reptilia: Lepidosauria)” can be read on the Journal of Systematic Palaeontology website.