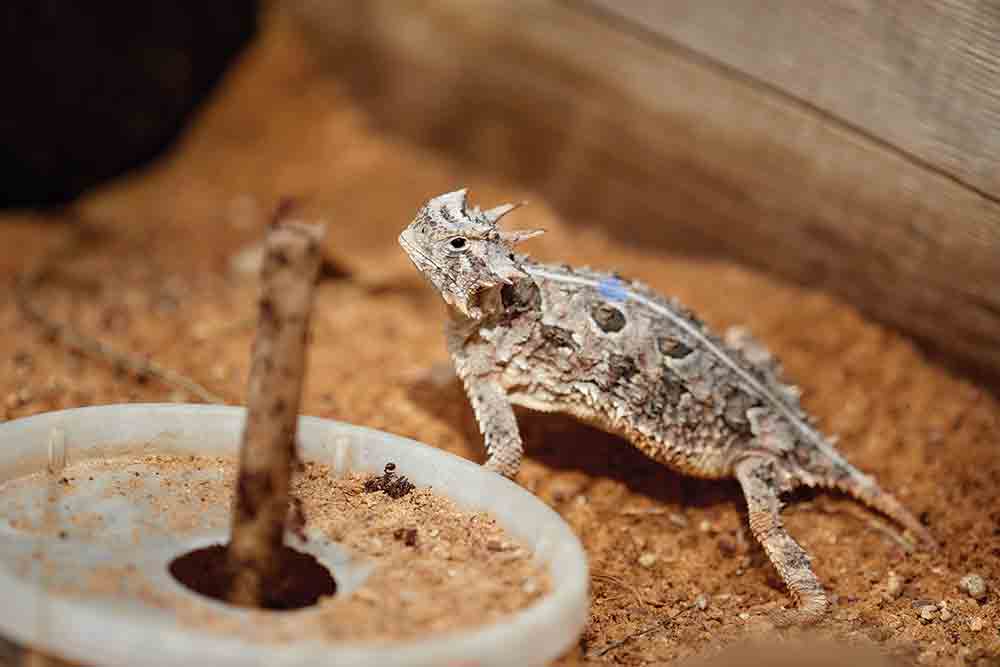 Bolstering the wild populations of this most interesting reptile.

Once abundant in much of the Southwest, the Texas horned lizard (Phrynosoma cornutum) has disappeared from much of its range in Texas.

Horned lizards (Phrynosoma), often called “horny toads” or “horned frogs” are quite possibly the most gregarious genus of lizard species in North America. Of the 15 known horned lizard species in the United States, the Texas horned lizard is the most widely distributed. Once abundant in much of the Southwest, the Texas horned lizard (Phrynosoma cornutum) has disappeared from much of its range in Texas. REPTILES magazine editor John Virata spoke with Prof. Dean Williams of Texas Christian University on horned lizard conservation efforts in the state. Over the years more than 1,000 hatchling horned lizards have been released in Texas. Williams started surveying horned lizards in 2009, using DNA samples that were collected from around the state. This data helps in the university’s efforts in captive breeding to ensure genetic diversity within the species. 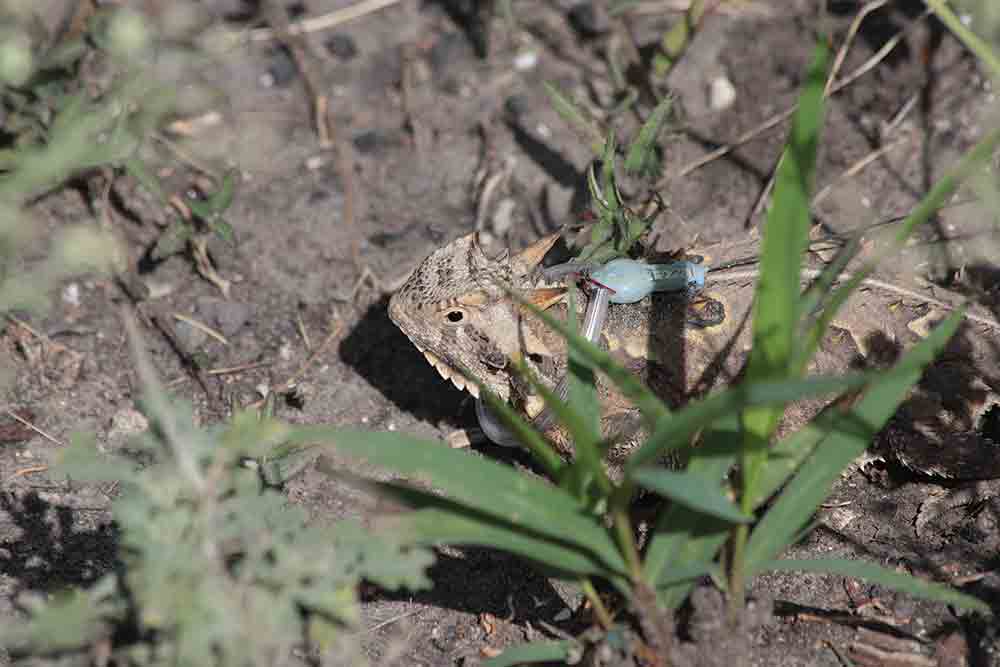 A subset of the released Texas horned lizards are tagged. Tracking provides the researchers with important movement patterns as well as microhabitats they inhabit and survival and mortality rates. Photo by Dean Williams and Andrew Emery

RM: We’ve heard stories from readers when they were young about the abundance of these lizards, and then the species seemingly disappeared from much of the Texas landscape. What happened?
Dean Williams: There are a few different reasons the lizards have disappeared. Probably the main reason the lizards have been declining is a loss of habitat to urbanization and agriculture. As cities in Texas have expanded, the dry, scrubby and prairie landscapes where the lizards thrive, have slowly disappeared. Another reason is the introduction of red invasive fire ants. These ants are aggressive and are known to out compete harvester ants, they will swarm and eat hatchling horned lizards, and presumably their eggs if they find them underground. The widespread use of insecticides used to kill ants has also decreased harvester ants and presumably the small ants that hatchlings need to eat. Some people also suspect the widespread use of herbicides may also have negatively affected horned lizards although the mechanism is uncertain. 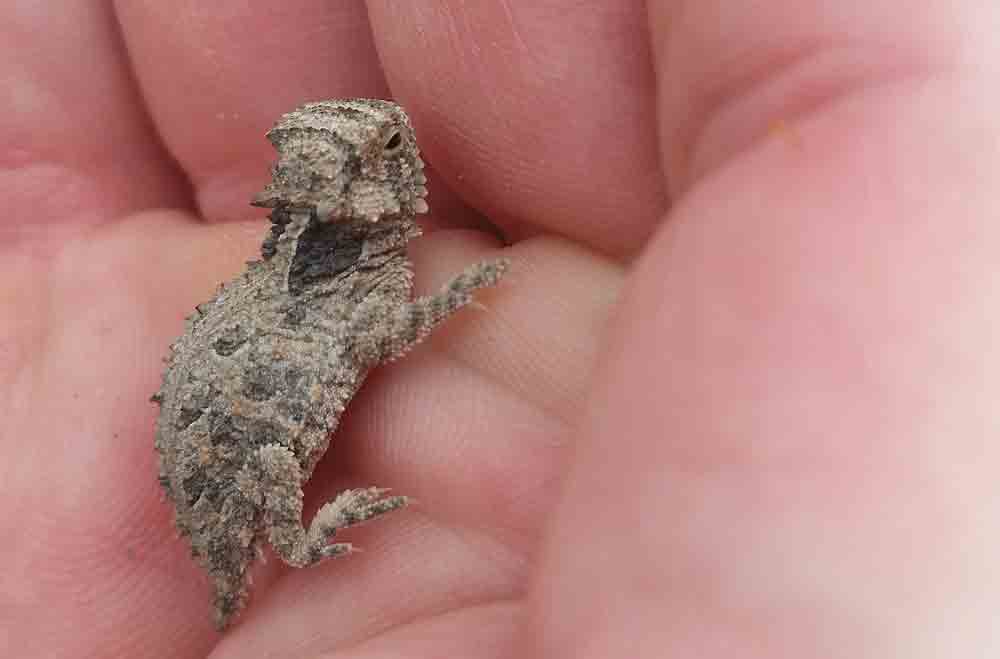 Hatchlings are very small when they are released. Photo by Dean Williams and Andrew Emery

RM: Is the Texas horned lizard abundant throughout the state?
DW: They have pretty much disappeared east and immediately west of I-35 in Texas. They are still abundant in some places in south Texas and in far west Texas.

RM: How much of a factor is human development on the decline of these lizards in Texas? Are the other horned lizard species in other states experiencing similar declines?
DW: It’s a big factor. As cities such as Dallas-Fort Worth, Austin, San Antonio and Houston have expanded, they take away the habitat of these lizards. We do not know if the other two species have suffered declines in the state since there is not a lot of data on them. The other two species are only found in far west Texas, in areas that have not seen human development to the extent that Texas has further east. 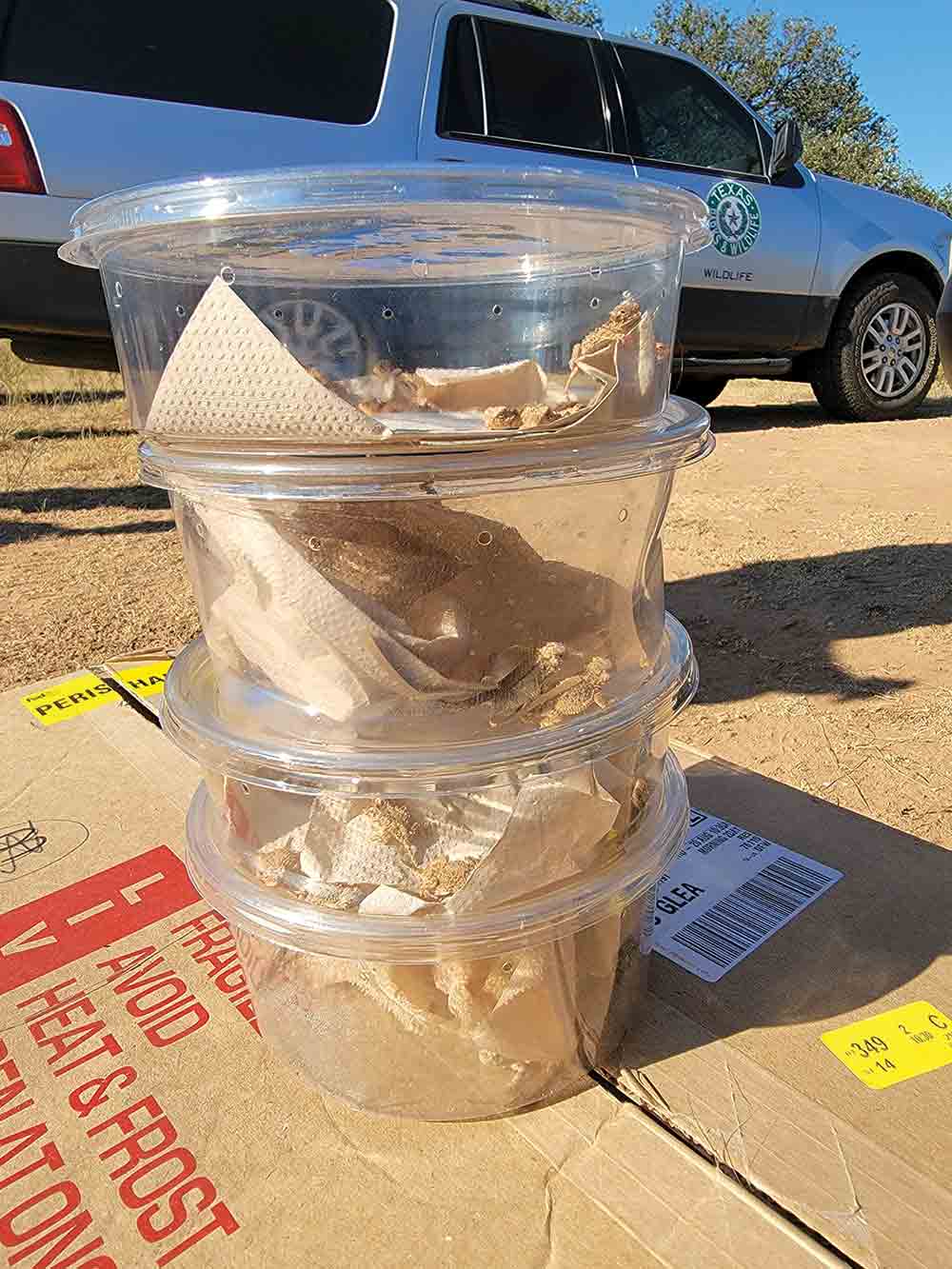 RM: There is 2006 data from Texas Parks and Wildlife (citizen driven Texas Horned Lizard Watch) that shows the invasive red fire ants have negative effects on the Texas horned lizard but may not have been the primary factor resulting in the decline of this species in the state. Others say collection for the pet trade and pesticide use may also have contributed. What is your assessment?
DW: Loss of suitable habitat is probably more important, as it is for most species that are declining. We do not have good data to determine the degree to which the pet trade, pesticides, or fire ants have had a negative effect. It is important to remember though, that declines have probably been caused by different combinations and strengths of these various factors in different regions and time periods. Unfortunently, Texas horned lizards used to be so abundant no one really kept track of them or their potential threats until after declines were well underway. 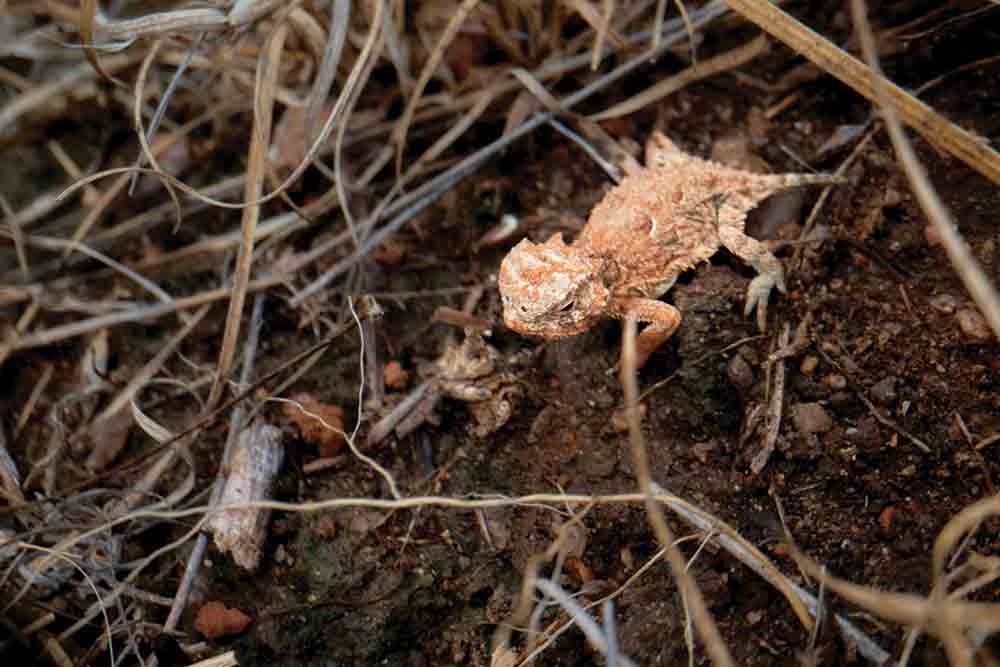 Texas Parks and Wildlife and Texas zoos are releasing several hundred hatchlings a year in a single area to get a population established. Photo by Dean Williams and Andrew Emery

RM: The release of 1,000 captive-born horned lizards over the last several years seems like a lot. Are there any studies as to the total population of these lizards in the state?
DW: No we do not have any state-wide estimates of population size. One thousand does seem like a lot but this species naturally has very low annual survival in the wild (10 – 30 percent) due to high predation levels. It is probably unusual for individuals to get past 4 years of age. They have very large clutch sizes (~30 eggs) which also suggests the hatchlings have low survivorship. This is why Texas Parks and Wildlife and Texas zoos (Fort Worth Zoo, Dallas Zoo, San Antonio Zoo) are now releasing several hundred hatchlings a year in a single area to get a population established.

RM: The 2018 release of 10 baby horned lizards by Texas Parks and Wildlife also featured tracking devices for these reptiles. Do you have any data on how they are doing in the wild? Are they always tracked when released?
DW: Only a subset are tracked when released. The captive-bred hatchlings seem to behave normally compared to what we know about wild hatchlings. For the past several years they also hibernate successfully until the following season. The tracking allows us to determine typical movement patterns, what microhabitats they utilize, what their survival is, and causes of mortality. 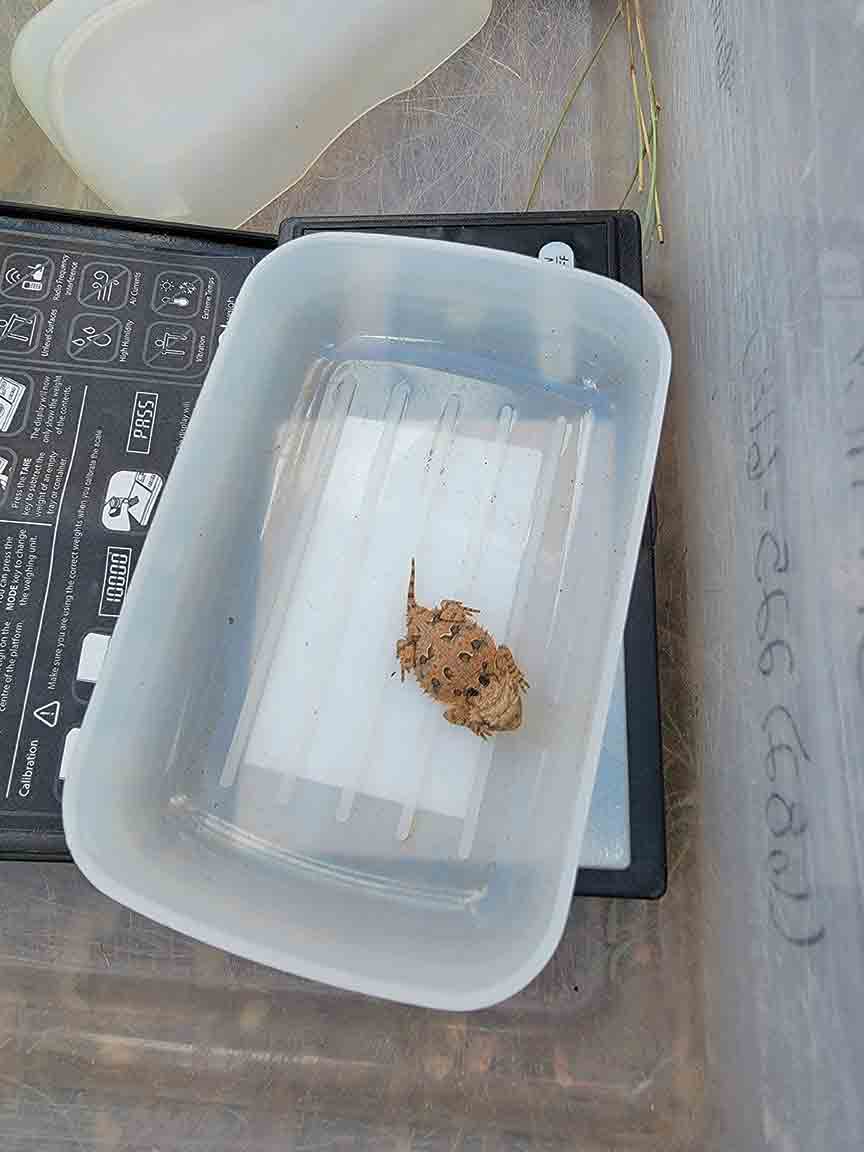 RM: About how many eggs are in a horned lizard clutch? And how long are they incubated before they hatch?
DW: Females burrow underground and lay 20-40 eggs which they cover with dirt. The eggs stay underground for about 6-8 weeks before they hatch and the hatchlings then dig their way to the surface.

RM: Is there any known data on these captive born horned lizards breeding in the wild with wild horned lizards?
DW: No, the reintroductions have only been done in areas without wild lizards. A few lizards released as hatchlings in the past years started breeding this year and constructing nests which produced hatchlings.

RM: At what age are the captive born horned lizards released into the wild? And how does the age at release enhance their chance of survival in the wild?
DW: They are released at a few weeks of age. Future studies are planned to see how they would do at a slightly older age (several months old for instance).

RM: Are the horned lizards “soft-pen” released? If so, how large is the area in which they are released?
DW: The hatchlings are not soft-penned released (previous studies have shown that this did not matter for small hatchlings but it does matter for adult lizards). They are released singly across an area of about 50 meters at several sites in the reintroduction area.

A subset of the released Texas horned lizards are tagged. Tracking provides the researchers with important movement patterns as well as microhabitats they inhabit and survival and mortality rates.
Photo by Dean Williams and Andrew Emery

RM: What are the natural predators to these lizards?
DW: A variety of birds and snakes, coyotes, racoons, and skunks are all predators of horned lizards. Coachwhip snakes seem to be one of the main predators at the reintroduction site.

RM: The state asked citizen helpers to document their sightings of horned lizards via the iNaturalist app. Do you have access to that data and if so, what is your take on the data?
DW: We have access to that data since it is publicly available. If the sighting has a picture of the lizard in its natural habitat (to verify id), a date, and GPS coordinates, it is pretty useful. There is of course always problems with some areas not being searched or some areas get searched a lot, which can make it difficult to analyze the data. A lot of property is also private in Texas which reduces the area that could potentially be surveyed unless the landowner is interested in uploading observations (which some do by the way).

RM: How long will the captive breeding program go on?
DW: Hopefully for a while, since we are still learning the optimal release strategies for reintroductions. REPTILES

Texas Wants To Know When You see A Horned Lizard