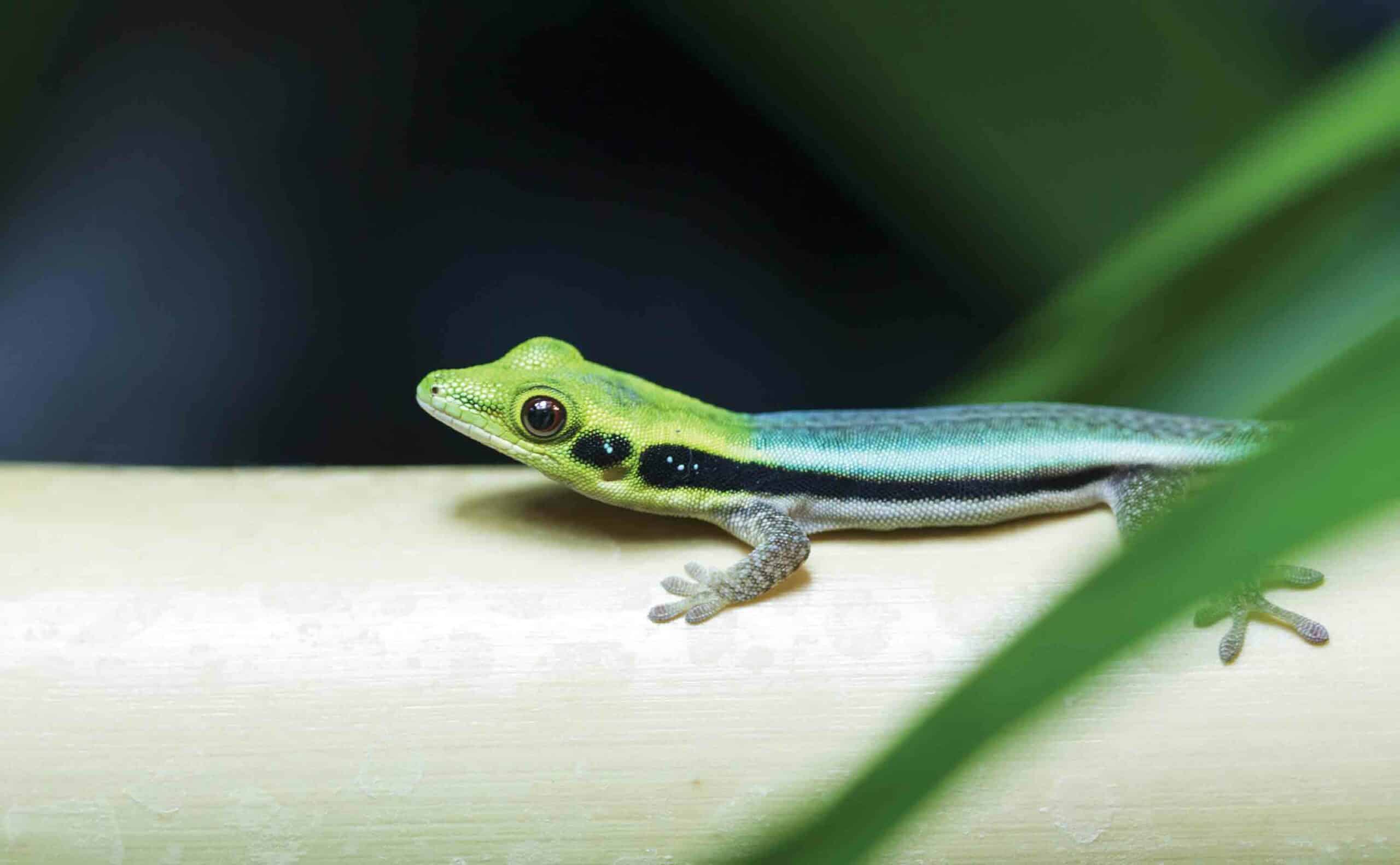 How Did My Reptile Get Its Scientific Name?

Scientific names are used by scientists and other animal-related professionals, as well as most hobbyists.

Scientific names are the easiest names to use but the hardest to learn.

As a kid, whenever I saw plants or animals I had not seen before, I’d ask my parents, “What’s this called? What about this one?” I was obsessed with knowing names, to the point where my parents bought me a huge animal encyclopedia so I could look up names myself. As I got older, my passion for animals and languages grew, which made picking out a college major extremely difficult. I eventually decided to pursue languages and linguistics as a career path. 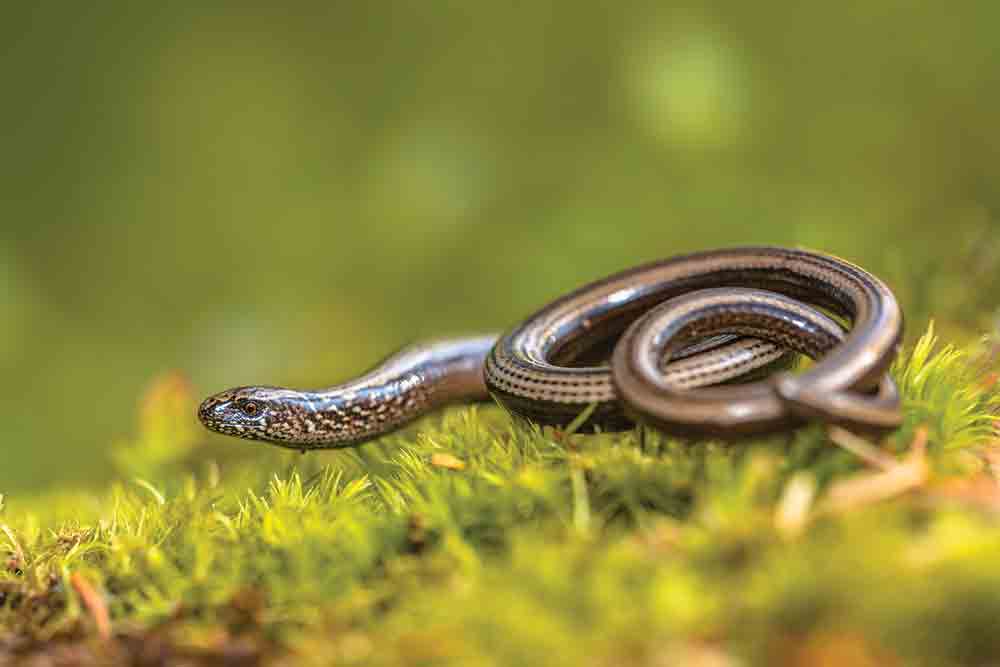 During one of my university assignments, we had to translate animal names, once again sparking my interest in animal names and taxonomy (the science of naming and classifying organisms). I continued this research throughout the rest of my master’s degree. Most people see linguistics and biology as two completely separate disciplines, but there is one exception: taxonomy. There are linguistic rules governing how and in what way organisms are named, and understanding these rules gives insight into how scientists decide on names, as well as why our ancestors named species the way they did.

When it comes to naming animals, there are two systems of taxonomy: scientific taxonomy and folk taxonomy. Scientific taxonomy is the system created by Karl Linnaeus in 1758, based on the classification of organisms described by Aristotle around 350 BC. This system has evolved over the centuries and is continuously improving.

Folk taxonomy, on the other hand, is a relatively static system. Snakes have always been called snakes, and unless some groundbreaking discovery happens that completely changes our definition of what a snake is, that is not likely to change. However, these two systems have one thing in common: they were made to fulfill our need to classify things. I am not going to discuss which system is superior, as both are used in completely different situations, but I will explain some of the (linguistic) differences in origin and usage.

Scientific names are the easiest names to use but the hardest to learn. They show which species are related to each other and usually consist of two or three names in a set order: genus, species, and (optionally) subspecies. For example, the Phelsuma madagascariensis kochi is part of the genus Phelsuma, species madagascariensis, and subspecies kochi. These names are universally used by scientists and hobbyists alike and follow a strict set of rules laid out by the International Commission for Zoological Nomenclature. The rules ensure that no two species or subspecies receive the same name and establish what to do if it does happen (in this case, the species that has had the name for longer gets to keep it). 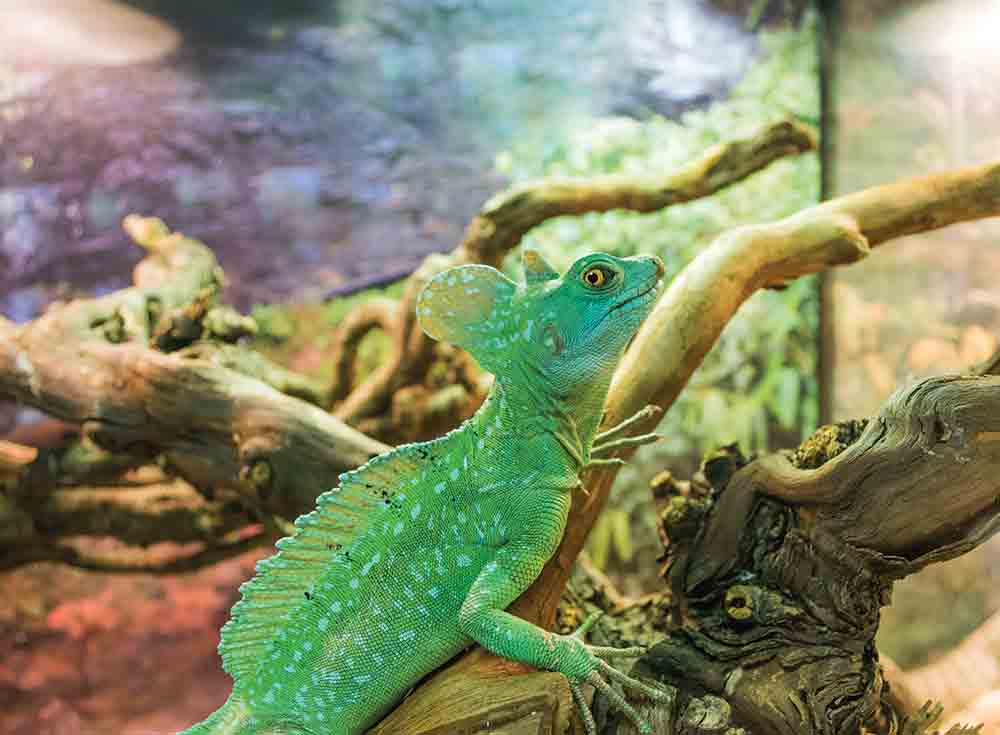 The Basilisk lizard derives its name from a creature in Greek mythology that is part rooster, snake and lion. The name is derived from the Greek word basilískos, which translates to “little king.” Photo by Blincov Denis/Shutterstock

Since scientific names use mostly Latin words, they are bound to Latin grammar. I’m not going to bore you with a detailed explanation of Latin grammar, but I will show some examples instead. A big aspect of Latin grammar is adding suffixes to words for grammatical purposes or set expressions. For example, the suffix –ensis is used to denote the location the animal was first found. Phelsuma madagascariensis can be seen as “the Phelsuma from Madagascar.” Of course, there are many Phelsuma species in Madagascar, but only one can be called madagascariensis. Another suffix, –i, can be used in many ways but is most often used to name species after someone else. An example for this from the Phelsuma genus is Phelsuma klemmeri, which was named after Dr. Konrad Klemmer, a German herpetologist. In cases where a species is named after multiple people, the suffix –orum can be used. This does not happen often, but an example of this is the Cyrtodactylus wakeorum, named after American herpetologists David and Marvalee Wake. 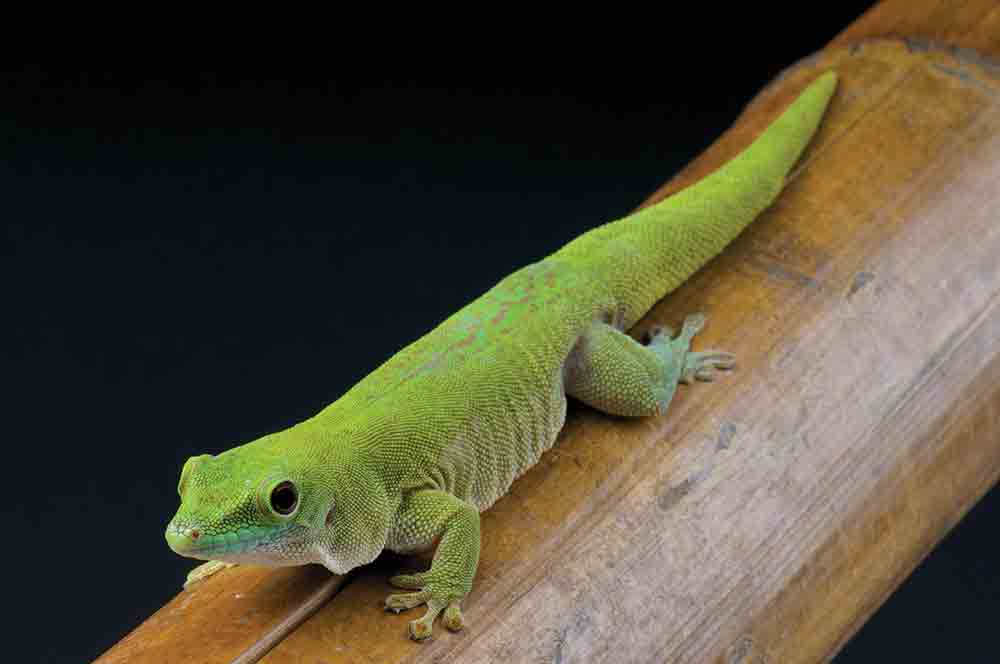 Not all genera and species have scientific names in Latin, though. Greek is also a common language used in scientific nomenclature, but it is always ‘Latinized’ to make it conform to Latin spelling and grammar. Other languages are rarely used. An example in another language is the gecko genus Matoatoa, which is based on the Malagasy word for ghost. As it ends in an ‘a,’ it can conform to Latin grammar rules and is therefore eligible as a name.

Unlike scientific names, common names have no written rules or standards to adhere to. They are used more often than scientific names, as they are easier to remember; everyone knows what a gecko is. But where did all these common names originate, and why do we call animals the names that we do? For some species, the answers to these questions are fairly simple. For example, geckos are named gecko after the Indonesian-Malay gēkoq, which is an onomatopoeia for the sounds these lizards make. Other animals are named after their resemblance to other animals, like the slow-worm (Anguis fragilis), which is named that way because it looks like a worm.

In natural language, most animals are given single-word names, usually less specific than those used in scientific taxonomy. For example, rattlesnake is used by most people to describe any rattlesnake species they see. This is partly because most people do not know how to identify the different species of rattlesnake but also because there is no need to learn specific names since, in most cases, the name rattlesnake is enough. Interestingly, the name rattlesnake shows another common occurrence in folk taxonomy: adding properties to animal names to differentiate them from other species. After all, to most people, rattlesnakes are simply snakes with a rattle on their tail. 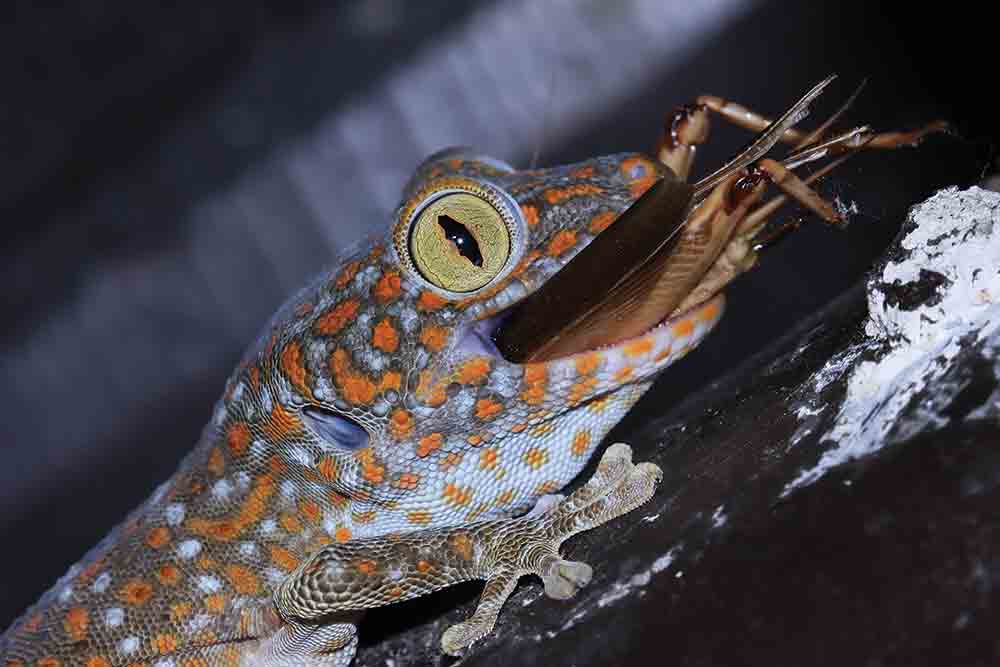 The tokay gecko (Gekko gecko) is named after the Indonesian-Malay gēkoq, the sounds that these lizards make. In the Philippines, these lizards are called “Tuko,” which is the sound (pronounced two’koo two’koo) they make at night when they are active. Photo by Worraket/Shutterstock

Many aspects of folk taxonomy come with some inconvenient consequences. Let’s take the name terrapin as an example. The common name terrapin is used for a number of species of small freshwater or brackish turtles. While this is not a problem by itself, the species that are called terrapin or have terrapin in their common names are not all related. Most common names operate on the taxonomic ranks of genus or family, meaning that they are used to describe whole genera or families of species. However, terrapins are spread out over multiple families. Not only that, but not all species in those families are called terrapin. Considering that most people assume that species with similar common names are always related to each other, it is easy to see why people get confused when they learn that not all species named terrapin are closely related (It certainly took me a while to catch on). 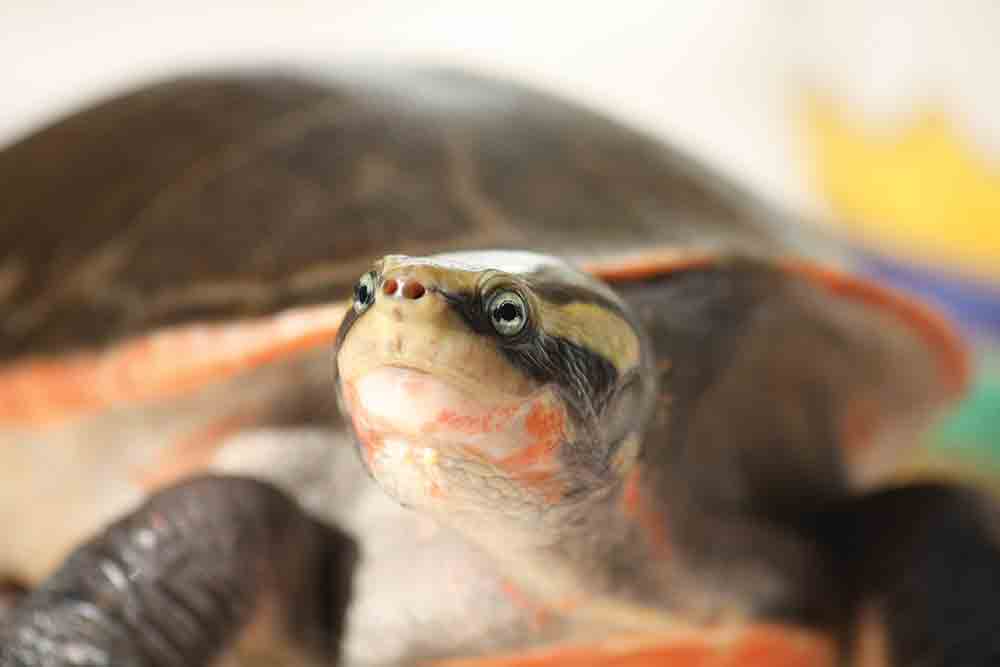 The pink-bellied side necked turtle (Emydura subglobosa) is also known as the red-bellied short necked turtle or Jardine River turtle. Photo by manorial1/Shutterstock

People’s knowledge of animal names is based on multiple factors. Animals that are native to your region will be easier for you to identify than animals that live on the other side of the planet. Another factor is the likelihood of the animal injuring or killing you. Being able to accurately identify dangerous animals increased our ancestors’ chances of survival, and it still does today. If you get bitten by a snake and go to the hospital, saying it was a rattlesnake allows doctors and nurses to narrow down the amount of options. Saying it was a snake, on the other hand, barely narrows it down, especially if you live in an area with many different species of venomous snakes. 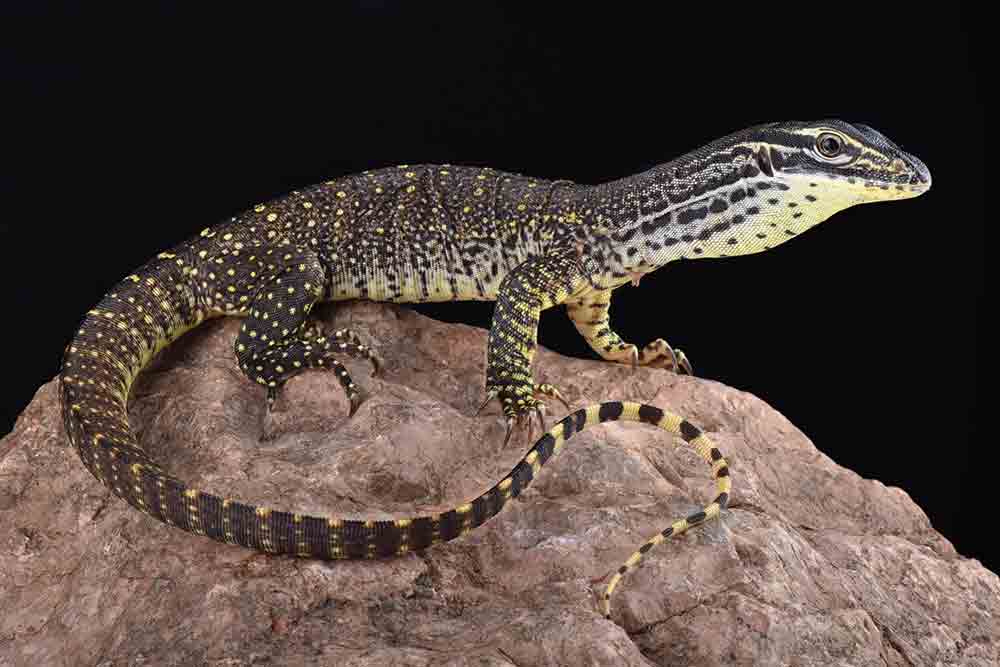 The Argus monitor (Varanus panoptes) is also known as the yellow-spotted monitor. The name panoptes is said to have come from Greek mythology, a creature with 100 eyes. Photo by reptiles4all/Shutterstock

It is clear that scientific and common names each have their own spot in communication. Scientific names are used by scientists and other animal-related professionals, as well as most hobbyists. Common names, on the other hand, are used by everyone else. So, it makes sense that scientific names need to be more precise and detailed when compared to common names. However, common names are more detailed than most people realize. A decent number of people living in the US can name at least a few species of rattlesnakes, even if they don’t care much for these animals. REPTILES

Rick van Mechelen holds a master’s degree in linguistics and translation, specialized in scientific and animal name translation. He wrote his thesis on the translation of animal names, focusing on gecko names.