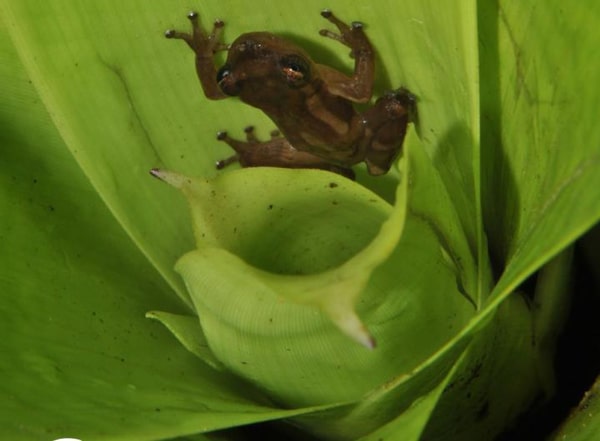 Dendropsophus bromeliaceus is found in bromeliad plants filled with rainwater.

Dendropsophus bromeliaceus is a new species of tree frog that has just been described in the PLOS One Journal. The tiny frog, just 16.1 to 18.4 mm, was found on rocky outcrops in the Brazilian Atlantic Forest, sitting in bromeliad plants that fill with rainwater. It has a dark brown back with a golden stripe behind the eye, a golden mid dorsal bar, a triangular golden blotch, brown limbs and brown or light orange thighs. Its belly is a light cream coloration, and it has copper colored irises. 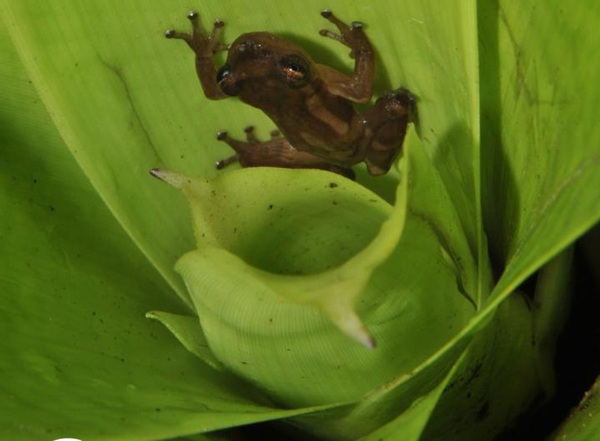 Lead researcher Rodrigo Ferreira of Utah State University and the Universidade Vila Velha in Brazil discovered the frog while surveying plants in Santa Teresa, Brazil, a mountainous region with a lot of rocky outcroppings. The researchers speculate that the frog spends its tadpole stage in water held in the leaves of bromeliad plants. The females are larger than the males and  Ferreira and his colleagues believe that it is the male that cares for the young.

“The discovery of this new species emphasizes the importance of this mountainous region for amphibian conservation,” the authors said in the paper. “Even though Santa Teresa and its surrounding areas in southeastern Brazil are one of the most sampled regions in the Atlantic Forest, the region still harbors numerous remote areas that have not yet been sampled for frogs.”

The complete paper can be read on the PLOS One Journal.