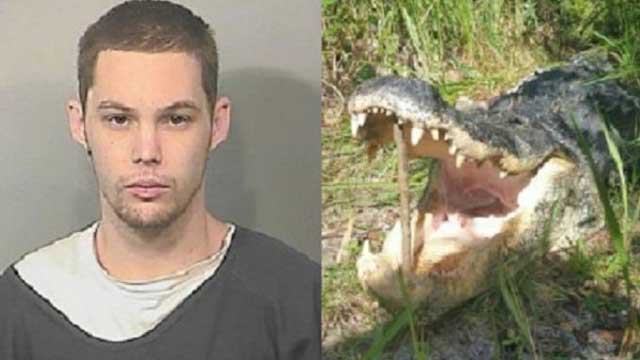 Alleged Burglar Killed By Gator While Hiding From Police

Matthew Riggins was killed by an alligator while allegedly hiding from police.

This has got to be the weirdest reptile-related news item this week, but then again, it took place in Florida. A man in Palm Bay, Fla. who was suspected of a rash of burglaries in Barefoot Bay was killed by an 11-foot alligator while allegedly hiding from police. Police were called to the Florida community November 13 by residents who reported two men wearing all black and were seen walking behind homes. Matthew Riggins, who allegedly told his girlfriend of his plans to commit burglaries in the community with another man, was reported missing the next day.

Riggins’ body was found November 23 in a nearby lake with bite wounds consistent with an alligator. Sheriff’s divers retrieved the body and the alligator, which apparently behaved aggressively toward the police divers during the retrieval of the body, and was the animal that killed Riggins, was trapped and euthanized.

The second man was also taken into custody but has refused to cooperate with the police investigation.