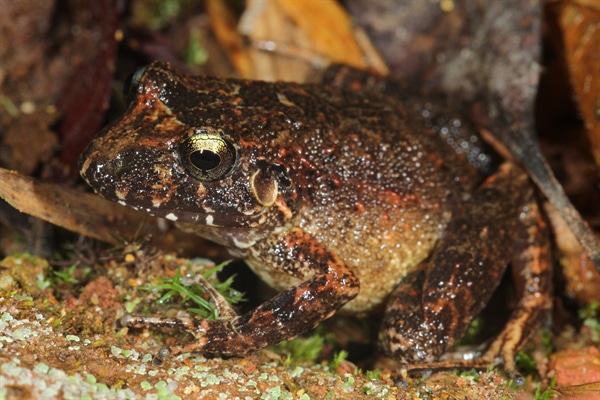 Herpetologists with the Bolivian Faunal Collection and the National Natural History Museum have discovered a new species of robber frog (Oreobates sp. nov.) in Bolivia’s Madidi National Park. The frog, also known as the big-headed frog, is from the Craugastoridae family of amphibians and was found during the first leg of an 18-month herping expedition to chronicle the wildlife in the park.

The robber frog is a small to medium-sized frog that can be found in the Andes and Amazon region of Bolivia and surrounding countries. There are 23 known species in the family that this frog belongs to, according to James Aparicio, who, along with fellow herpetologist Mauricio Ocampo, discovered the species.

The excursion to document new species began in June 2015 and will lead the researchers to 14 sites over the next year-and-a-half. They will spend the bulk of their time more than 5,000 meters high in the Andes mountains as well as down into the tropical Amazonian forests and grasslands of northern Bolivia.

The first two study sites have garnered a bonanza of species.  They have counted 208 and 254 vertebrate species in June and July 2015, including 15 fish species, five amphibian species, 11 reptile species, four bird species and 25 mammals. Of these species, three catfish, another frog, and a lizard are candidates as new species discoveries.

The expedition is funded by the Wildlife Conservation Society and the Gordon and Betty Moore Foundation.