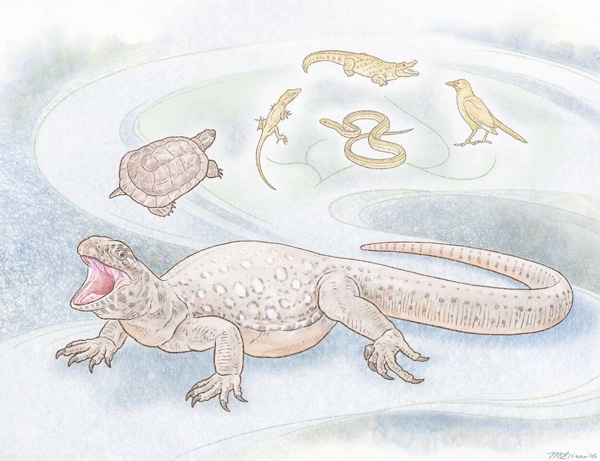 Eunotosaurus africanus is the first known turtle, even though it lacked a shell. The reptile was thought to have been the first known turtle, but was initially discounted because it had a mouthful of teeth and modern day turtles do not have teeth. Researchers with the New York Institute of Technology, led by anatomy professor Gaberiel Bever utilized advanced scanning technology to create a detailed analysis of the skull of Eunotosaurus africanus in order to prove that it was indeed the oldest known member of the turtle group.

How Did The Turtle Get Its Shell?

Secret Of The Turtle Shell

What the scans showed were a pair of holes behind eyes of Eunotosaurus, enabling its jaw muscles to flex while it chewed, giving Eunotosaurus what is called a diapsid skull, which like other reptiles, except turtles, have diapsid skulls. Modern turtles have anapsid skulls with no openings.

"Where turtles came from, evolutionarily speaking, and how they are related to the other major groups of living reptiles – lizards, snakes, crocodiles and birds – has been a topic of vigorous debate for as long as we ve had a theory of evolution," Bever said.

"Turtles have been missing their Archaeopteryx, their missing link to the rest of the vertebrate tree, since Darwin told us that we should be looking for one," said Bever. Archaeopteryx is the oldest known bird fossil.

"With Odontochelys, Pappochelys and now Eunotosaurus, we now have a remarkable series of transitional forms that take us from an almost lizard-like creature to the modern turtle body plan that is so interesting and bizarre."