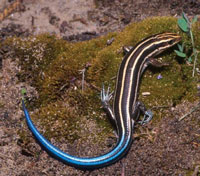 "The Amphibians and Reptiles of Michigan" published by Wayne State University Press.

A Michigan State University college professor's book on reptiles and amphibians has just been published, eight years after his death. J. Alan Holman was working on his book "The Amphibians and Reptiles of Michigan" when he passed away in 2006. Holman had completed most of the book. It just needed to be edited and the references checked to ensure they were up to date. James Harding, a colleague of Holman's at the university as well as a zoology faculty member, James Gillingham, professor emeritus of biology at Central Michigan University, and David Mifsud of Herpetological Resource and Management completed those tasks to get the book into print.

The book is focused on the herps in Michigan and is written to provide an easy read for anyone who wants to learn about the animals in the state. Holman also explains in the book the history of the state with regard to these animals and why there are fewer reptiles and amphibians in the Upper Peninsula of the state, as well as how snakes might have become established on Beaver Island.

Harding told the Detroit Free Press that Holman wrote the book in an effort to connect the reptiles and amphibians found in the state today and how they came to be in the state. Harding first met the professor in 1970 when he took one of the professor's classes in vertebrate paleontology at Michigan State University. This began their lifelong collaboration on three other herp-related books; "Michigan Snakes," "Michigan Turtles and Lizards" and "Michigan Frogs, Toads and Salamanders."