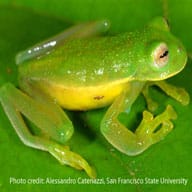 AmphibiaWeb.org, a website started in 2000 by UC Berkeley scientists to document new species of amphibians, announced that it has documented and described the 7,000th amphibian species discovered to date, up from 5,000 12 years ago when the website was first launched. The species, Centrolene sabini, a green glass frog, was discovered by Alessandro Catenazzi, a naturalist from San Francisco State University when he was on a herping expedition in the Andes Mountains of Peru. 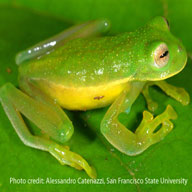 The site was launched to help scientists catalog new discoveries of amphibians. While many amphibians are disappearing worldwide due to human pressures as well as the chytrid fungus that has devastated amphibian populations virtually everywhere in the world, new species of amphibians are being discovered almost weekly. Just over the last two weeks, scientists reported 18 new species of amphibians on AmphibiaWeb.org, including the glass frog. Frogs dominate the reported species on the site. Of the 7,000 species that are documented on the site, 6,179 are frogs, 631 are newts and salamanders, and 190 are caecilians, a legless and oftentimes blind family of worm or snake like creatures that spend the majority of their time burrowing underground.

According to a report in ScienceBlog, three new species were posted to AmphibiaWeb.org each week in the last seven months of 2012, totaling 100 new species thus far this year. Of the regions of the world where amphibians are abundant, South Asia seems to be the hotbed for new discoveries. David Wake who is professor emeritus of integrative biology at the University of California, Berkeley, and director of AmphibiaWeb, told the site that South Asia and the tropical regions of India have been the locations of many new discoveries. Ecuador though is still the number one location of new species per area, he said. Papua New Guinea, Brazil, Peru, India, and China are also important locations for new discoveries, Wake said.