Paedophryne dekot and P. verrucosa are between 8.5 to 9.3mm in length

Two frogs, Paedophryne dekot and P. verrucosa, meaning very small in the local Daga language and "full of warts" in Latin, were discovered earlier this year in Papua New Guinea by vertebrate zoologist Fred Krause of the Bishop Museum in Hawaii. According to the paper Krause published in Zookeys “At the lower size limit for tetrapods, two new species of the miniaturized frog genus Paedophryne (Anura, Microhylidae),” both frogs are about 8.5 to 9 millimeters and 8.8 to 9.3 millimeters long, respectively and hold the distinction of being the world's smallest tetrapods (vertebrates with four legs). 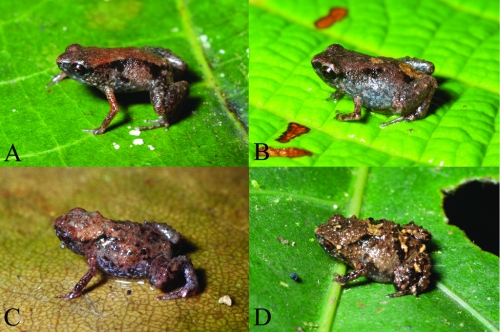 Krause discovered the tiny amphibians on a mountain while on a herping expedition in southeastern Papua New Guinea. He previously identified the species as a new genus of frog that lives among the leaves on the forest floor. According to a National Geographic article, Krause said that the frogs likely evolved to their current diminutive size to fill a role in the ecosystem that wasn't addressed by other creatures.

Krause noted that the frogs eat small prey such as mites and other miniature insects that wouldn't sustain larger animals. Predators to these frogs are not known, though Krause told ReptileChannel that they would probably include spiders and centipedes, which are abundant on the rainforest floor. Both frogs are varying shades of brown and black in color, have three digits on the front legs and four on the back, and share the same mountain, though separated by elevation. To locate the frogs, Krause and his team of assistants would listen for their call, which can be distinctly hearde from 50 to 80 feet, put their faces close to the forest floor to try to see and capture the animals with their bare hands, which Krause said proved difficult considering the frogs jump in a similar manner to crickets. Krause also noted in his paper that five female frogs he examined from both species (two Paedophryne dekot, three Paedophryne verrucosa) carried only two eggs and 12 oocytes, suggesting that clutch size is one or two. He did note that the frequency that the females deposit clutches was not yet determined.