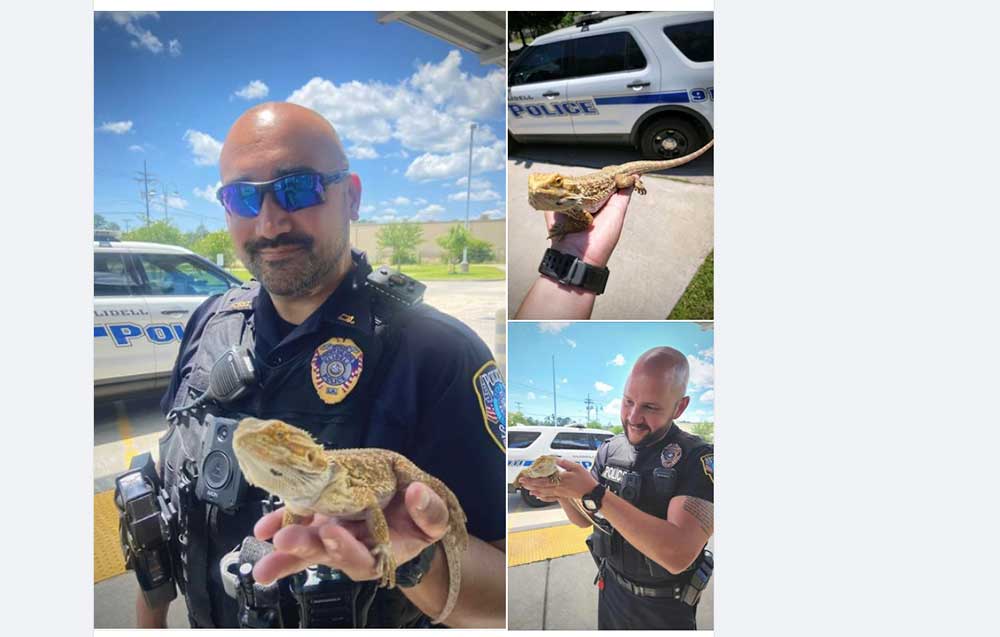 Swanton put out an APB for the keeper of the beardie, but has to yet received a response.

Officer Swanton keeps both a bearded dragon and an iguana.

The police officer put out an APB for the owner, but three days later, nobody has come forward.

Police Officer Thomas Swanton responded to a call that a green iguana (Iguana iguana) was on the loose in Slidell, Louisiana. When he arrived on scene, people pointed him in the right direction of where the lizard was. But when he got to the lizard, he immediately realized the lost lizard wasn’t an iguana, as was initially reported. The lizard was a bearded dragon (Pogona vitticeps). Officer Swanton picked up the beardie and started petting him.

The Slidell Police Department wrote on Facebook that it was just chance that Swanton responded to the call. What was even more coincidental is the fact that Swanton KEEPS both an iguana and a bearded dragon.

Swanton has put out an APB for the keeper of the beardie, but has to yet received a response. So for now, the friendly lizard is in the care of Officer Swanton.

“So here is the Unsolved Mystery. . . How did a bearded dragon make its way to the 1100 block of Cousin Street? What is its name? Should it become the new SPD mascot? Does anyone know the owner of this bearded dragon? If so, please drop us a message to let us know so we can close out this case! If not, Officer Swanton will proudly care for this new reptile and add to his family!” the police department wrote on its Facebook page.

Bearded dragons are one of the most popular lizards among reptile keepers, while green iguanas were very popular in the 1970s and 1980s when not a whole lot was known about their care.

The bearded dragon is the most popular herp kept by reptile keepers, according to a study based off Google Trends that was published in March 2021 by the German Centre for Integrative Biodiversity Research. It is probably the most popular lizard kept as a pet due in part to its curious nature. When properly cared for, they can live quite long for a smaller lizard and are one of the most widely captive-bred lizards in the world.

The green iguana was one of the first lizard species kept as pets, back when not a lot was known about their husbandry. Thanks to better husbandry and knowledge about this species, these reptiles are living longer lives for those who keep them. They grow large and are for experienced keepers only. They are a magnificent looking reptile and are plant eaters.