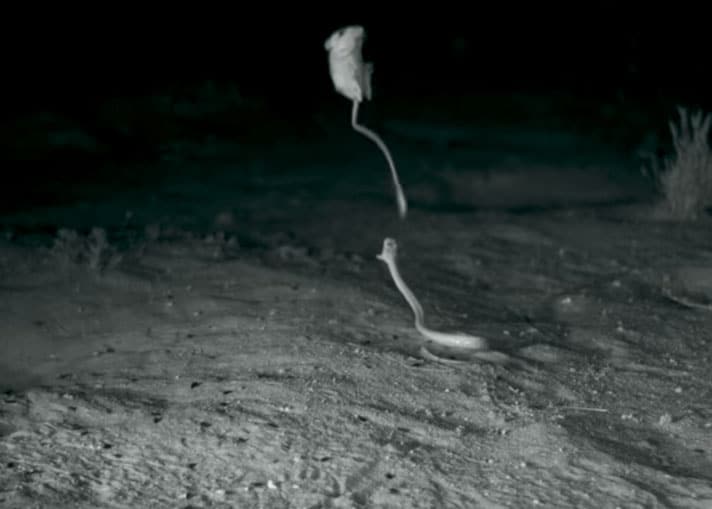 Kangaroo Rats Use Their Long Legs To Kick Rattlesnakes When Attacked

The kangaroo rats can also reorient their body in mid-air to escape rattlesnake bites.

The desert kangaroo rat (Dipodomys deserti) has a unique defense mechanism that enables it to escape the venomous bites of the sidewinder rattlesnake (Crotalus cerastes). Researchers from San Diego State University noted that the clashes between predator and prey happened so fast, they were unsure how the rodents escaped from the encounters without being bitten.

So, they used high speed cameras to capture encounters of the small desert rodent with the venomous snake and found that the kangaroo rat has several unique abilities that help it escape. The kangaroo rat can jump very high to avoid the bite, and uses its tail to reorient itself in mid-air so it can safely jump away from the snake.

Another method the rat employs is the use of its kangaroo-like long rear legs to kick the rattlesnake so fast that even if the snake succeeds in biting the rat, the rat is fast enough to avoid any venom injection.

The researchers recorded 32 encounters between rat and snake in Yuma, AZ’s Sonoran Desert and documented these defensive and evasive maneuvers. The kicking was very interesting because the rats also use their legs when fighting amongst themselves. Some of the encounters are faster than the blink of an eye. The researchers said. One kangaroo rat reacted to an attack in 38 milliseconds after the snake began its lunge at the rat.

The researchers published two papers on their findings. They can be accessed free via the Science News website.