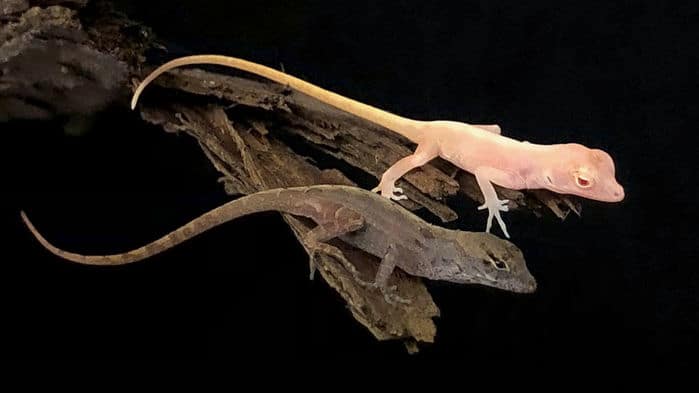 Through gene editing, scientists were able to cause albinism in brown anole lizards.

Colorful genetics have long been popular in herpetoculture and the pet trade, and gene editing isn't something brand new in science; but for the first time ever it's been successful (and studied) in a reptile, the brown anole (Anolis sagrei)!

In a recently published pre-paper from the University of Georgia, scientists were able to genetically modify brown anoles so they were born albino. This process took extreme effort and diligence in the embryology of the lizard mothers' eggs. Scientists were able to inject unfertilized eggs and alter the DNA. When fertilized by natural mating, the artificial DNA took over the paternal genes, which caused albino anole lizards to be born. The research used a relatively common method of gene splicing, called CRISPR-Cas9, which "is an effective method for producing genetically modified vertebrates… However, the reproductive biology of reptiles presents unique barriers for the use of this technology, and there are currently no reptiles with effective methods for targeted mutagenesis." This study is an interesting aesthetic manipulation, but also helps give further insight into reptile development and evolution.

In animals, DNA is located inside the nucleus of every cell, and acts like instructions for the entire organism (in this case, brown anoles!) Even though reptiles develop within eggs and not usually inside the mother, extreme caution is always used in embryological science projects. Embryology is the study of embryos and their development, and an embryo is defined as, "an unborn or unhatched offspring in the process of development." In this study, the embryos were not altered, but the unfertilized ovum (or egg) inside the mother Anole Lizards.

Since this project focuses in on such a tiny scale, altering an anole zygote (fertilized egg) was too dangerous. Still a fragile process, Scientists performed a surgical procedure that microscopically injected needles into the eggs inside the mother's ovaries which were not yet fertilized. (Disclaimer: all methods within scientific research like this are overseen by the Committee on Animal Research and Ethics (CARE) and are federally regulated.) This research helps Herpetological studies as well as studies on human albinism. A total of 146 oocytes (or unfertilized egg cells) from 21 reproductively active females were microinjected over the course of eight surgical sessions. The Female Anoles were allowed to mate naturally and develop their eggs inside of them naturally as well.

Once natural mating, fertilization, and development occurred, eggs typically hatched in 4-6 weeks. 4 albino anoles were born, proving the success of gene editing in reptiles. But how did they edit DNA? In many animals, Tyrosinase is an enzyme that creates normal pigments, or the color in skin cells! This is the same for many reptiles too, including the Brown Anoles. This enzyme was targeted in this research to purposely breed albino brown anoles (Anolis sagrei). Using protein complexes at a very small scale, the CRISPR-Cas9 Method stopped the Tyrosinase from being expressed, which resulted in artificially created albino brown anoles. Four of these brown anoles were visibly albino, while the other five only carried the genetic mutation when genetic testing was done. In total, nine anoles were manufactured by this study. While this contributes to many scientific branches, could this be the new craze for captive breeding and the morph industry? While aesthetic genetic combinations could be confidently bred, could genetic conditions also be altered so that only the healthiest animals are created in captivity? Read the full pre-article here for more: CRISPR-Cas9 Gene Editing in Lizards Through Microinjection of Unfertilized Oocytes.