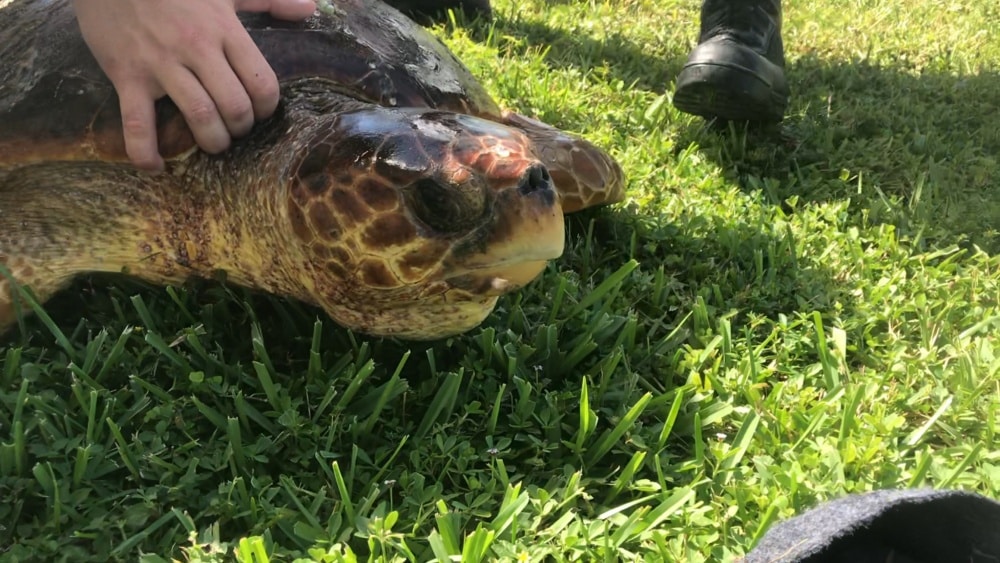 A goldspotted eel was removed from a sea turtle that was rescued by the U.S. Coast Guard.

The U.S. Coast Guard brought an injured loggerhead sea turtle (Caretta caretta) to The Turtle Hospital in Marathon, FL with an apparent abscess within its body cavity.

Veterinarians at the hospital thought the turtle had eaten something and was suffering from an impaction, until x-rays of the turtle, named Shelmore, were taken. Upon inspection of the x-rays, the veterinarians thought that the impaction was of an eel. The staff thought that it was impossible that the turtle had ingested an eel, so an ultrasound was performed to no success. It was decided to look inside the reptile laparoscopically with an endoscope, but that also proved inconclusive. They then just thought it was a massive infection and made the decision to remove the obstruction surgically. 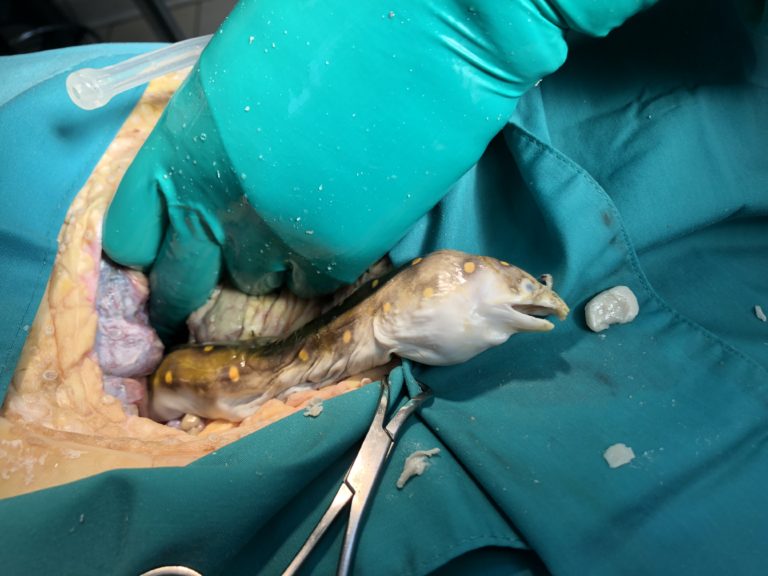 A goldspotted eel was removed from a sea turtle that was rescued by the U.S. Coast Guard.

"We are grateful to all the partner agencies involved in the rescue of Shelmore, a sub-adult loggerhead sea turtle, who was checked into the Turtle Hospital," Bette Zirkelbach, Turtle Hospital manager said in a press release put out by the U.S. Coast Guard. "When Shelmore was brought into the hospital, we did a workup that included a physical examination, blood chemistry and radiographs. Shelmore is looking good in her hospital tank and is in guarded condition."

Microplastics May Have Negative Impact On Loggerhead Turtle Nests

The staff speculate that Shelmore ate the eel, a goldspotted snake eel, (Myrichthys ocellatus) and the eel ate through the turtle's intestines, and ended up dying in the turtle's body cavity. The turtle's body then encapsulated the eel, which made it look like an abscess. Eels are generally not part of the loggerhead turtle's diet.

"While the eel is no longer in Shelmore, he still has a long road to recovery," the Turtle Hospital wrote on its blog. "Due to the “foreign object” inside Shelmore’s body cavity, and unknown how long it was there, Shelmore has a raging body cavity infection. But no matter what, he is definitely feeling better now!"