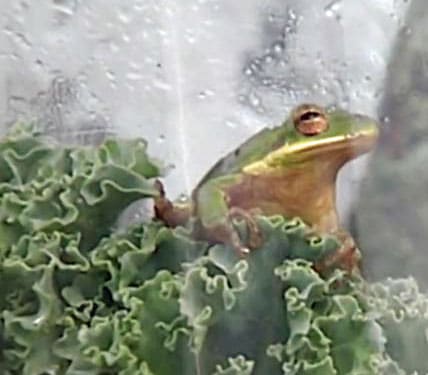 Illinois Man Finds Frog In Kale, Keeps It As Pet

This little treefrog was found in a bunch of kale.

Talk about getting a Twofer. An Illinois man who picked up a lovely bunch of kale at the grocery store was surprised a few days later when a frog was discovered as he was washing the kale to prepare a salad. Jesse Fox of Rockford, IL, told CBS News 23 that the kale sat in his refrigerator for about a week before he pulled it out to prepare a salad. His friend noticed something moving about in the kale and then watched as a small green frog jump out. "That's why you wash your produce," Fox told the station.

This isn't the first time a frog was found in someone's salad. A special education teacher found a frog in her Costco salad and also kept it as a pet. Fox and his wife have decided to keep the frog, which appears to be an American green treefrog (Hyla cinerea) that is native to the central and southeastern United States. Its name? Kale.

American green treefrogs grow to about 2.5 inches in length. They can be found from Virginia to southern Florida and as far west as central Texas. The frog is nocturnal and is rather shy. Handling should be limited. They eat small insects such as flies and crickets and are an arboreal species.