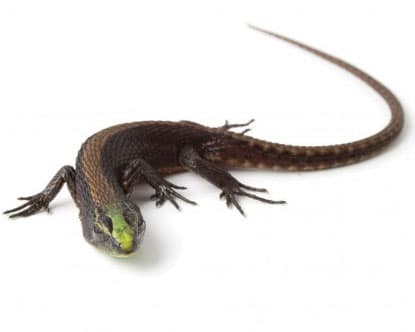 The emerald-headed lizard is a ground dweller and lives among the leaf litter of the Santa Lucia Cloud Forest Reserve.

Check out this insanely colorful lizard found in the South American hotbed of biological diversity! Emerald green nose with a brownish-yellowish stripe running down its back, a patterned tail, and a bright orange belly. This little guy is camouflaged for ground dwelling.  It was discovered by herpetologist Omar Torres-Carvajal and undergraduate student Simon Lobos, both of Pontificia Universidad Católica del Ecuador in Ecuador, living in the Santa Lucia Cloud Forest Reserve, less than one hour from Quito, the capital of Ecuador.

The lizard, Alopoglossus viridiceps has a striking coloration, with an emerald colored head, a yellowish brown stripe running down its back and an orange belly. Characterized as a shade lizard, this little guy lives and forages for food on the forest floor among tree leaves and other natural debris. It is unique from other leaf lizards in that it has a folded tongue instead of a bumpy one and large scales on its throat.

The duo found the lizard during a 2013 herping expedition during which they were constructing the evolutionary relationship among Alopoglossus lizards, National Geographic reports. The lizard was not like the drab lizards they were accustomed to seeing but rather resembled the museum specimens that had been collected during the last five years from the region. A DNA analysis was performed, comparing the more recent collections and confirmed that the lizard was indeed a previously unknown species. So far, the emerald-headed lizard with the bright orange belly has only been found on the western side of the Andes mountains, leading Torres-Carvajal to speculate that the lizard's evolution coincides with that of the mountain's evolution.