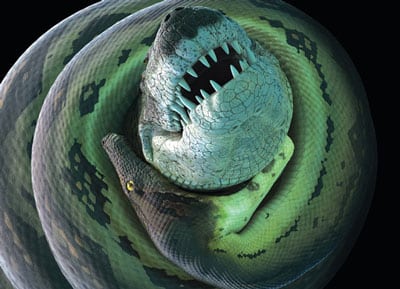 The notion that today's crocodilians are living fossils that have remained largely unchanged for the last 250 million years has been turned on its head with a new discovery of a crocodilian species that lived in freshwater rivers during the same time and locations a Titanoboa more than 60 million years ago. The croc, estimated to be 16 feet in length with a weight of more than 900 pounds was recently discovered in the same layer of rock as Titanoboa, the 58 foot constrictor that presumably ruled its ecosystem in Cerrejon in northern Colombia.

Named Anthracosuchus balrogus,  after the fictional Balrog that lived in the Mines of Moria in J.R.R. Tolkien's “The Lord of the Rings," the dyrosaurid crocodile has a very short snout and large jaw muscles, that would give it a very powerful bite, said Alex Hastings, a postdoctoral researcher at Martin Luther Universität Halle-Wittenberg and lead author of the study detailing the new crocodile. It appeared to have lived in freshwater ecosystems even though dyrosaurids were ocean dwellers. 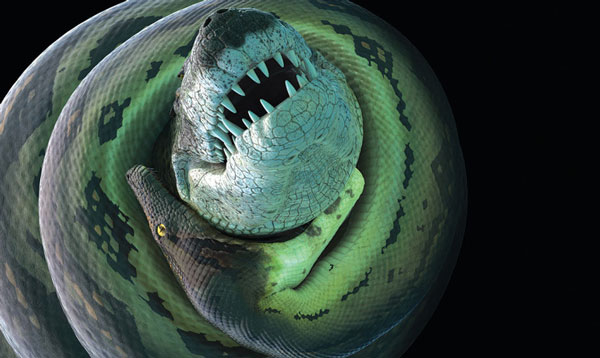 Although Anthracosuchus balrogus was large, it was still no match for Titanoboa.

"Everyone thinks that crocodiles are living fossils that have remained virtually unchanged for the last 250 million years. But what we’re finding in the fossil record tells a very different story," Hastings told the University of Florida, where he was a former graduate student.

The animal had a boxy skull and short snout that the scientists say evolved based on its wide ranging diet, which would probably consist of turtles and fish, and the occasional snake. The scientists speculate that the croc and Titanoboa surely would have crossed paths during their time, but they believe that Titanoboa would have probably got the best of the still formidable croc due in large part to its length at around 58 feet and its powerful constricting capability which could easily dispatch of the crocodile.

This isn't the first such crocodile to have been unearthed in the same location in which Titanoboa was discovered. Acherontisuchus guajiraensis was also discovered by Hastings several years ago in the same mine as Titanoboa. It was estimated to be 20 feet in length and sported a long snout, rather than the short snout of Anthracosuchus balrogus.