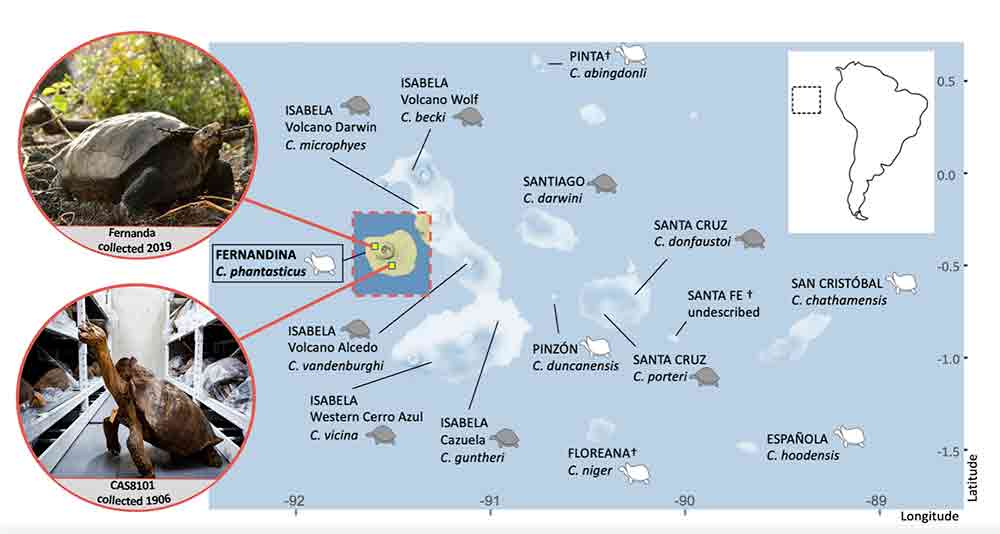 The confirmation of the existence of this new subspecies of giant tortoise was published in the journal Communications Biology.

A Galapagos tortoise that was found during a 2019 herping expedition that included Forrest Galante of Animal Planet’s “Extinct or Alive” was determined to be, through genome sequencing, what Galante and his team had suspected, a Fernandina Island Galapagos giant tortoise (Chelonoidis phantasticus), and currently the only known living species of its kind.

The scientists, Evelyn L. Jensen, Stephen J. Gaughran, Nicole A. Fusco, Nikos Poulakakis, Washington Tapia, Christian Sevilla, Jeffreys Málaga, Carol Mariani, James P. Gibbs and Adalgisa Caccone, sequenced the genomes of the specimen that was collected in 1906 with Fernanda, who was collected in 2019. The scientists compared the data with all living species of Galapagos giant tortoises and determined that the 1906 specimen and Fern share the same lineage and are distinct from the other giant Galapagos tortoises.

“By sequencing the genomes of both individuals and comparing them to all living species of Galapagos giant tortoises, here we show that the two known Fernandina tortoises are from the same lineage and distinct from all others,” the researchers wrote in their paper. “The whole genome phylogeny groups the Fernandina individuals within a monophyletic group containing all species with a saddleback carapace morphology and one semi-saddleback species. This grouping of the saddleback species is contrary to mitochondrial DNA phylogenies, which place the saddleback species across several clades. These results imply the continued existence of lineage long considered extinct, with a current known population size of a single individual.”

The initial team that first discovered Fern found her not in great condition but she was surviving. The decision was made to bring her off Fernandina Island and take her to the Fausto Llorena Breeding Center on Santa Cruz Island. The team also spent two more days searching for another tortoise, in hopes of finding a male that could form a breeding pair. They were unsuccessful in their search. At the time of Fern’s discovery, the herpetologists were unsure if she was definitively the lost species of Galapagos tortoise, Chelonoidis phantastica.

History of the Galapagos Tortoise

“Since only one other specimen of this species has ever been found (a deceased male collected in 1906), we have never seen a female of the species,” Anders Rhodin of the Turtle Conservancy and IUCN specialist group was quoted in the May/June 2019 issue of REPTILES that detailed the finding of what is now confirmed as the lost giant Galapagos tortoise, Chelonoidis phantastica. “The photos from the team clearly show a moderately saddlebacked, old female about half to two-thirds the size of the known male. Pending genetic confirmation, this is almost undoubtedly the lost Fernandina Giant Tortoise.”

You can read the story, Finding Fernandina, on ReptilesMagazine.com.