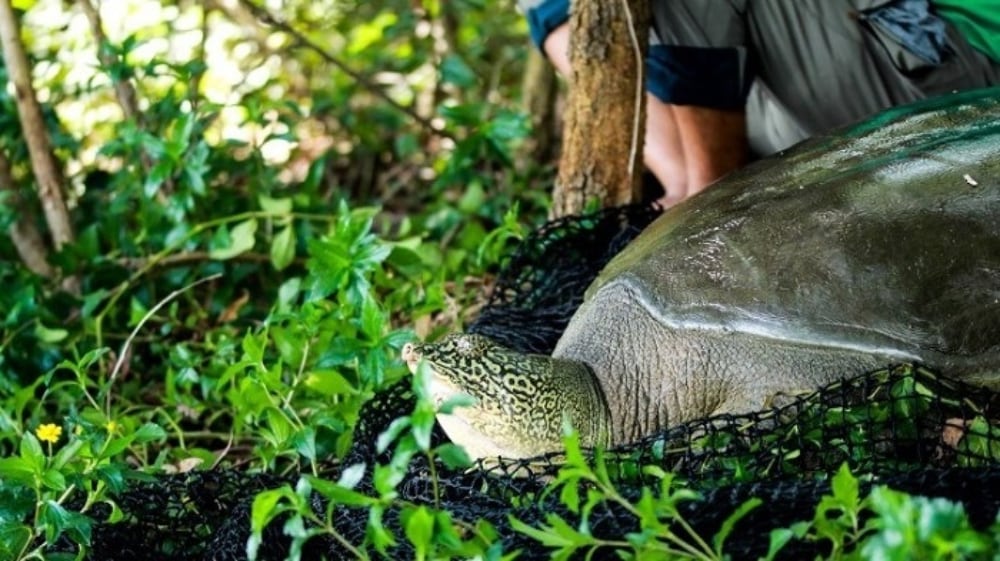 Sixteen months after the last known female Yangtze giant soft-shell turtle (Rafetus swinhoei) died at the Suzhou Zoo in China, a female of this critic

Sixteen months after the last known female Yangtze giant soft-shell turtle (Rafetus swinhoei) died at the Suzhou Zoo in China, a female of this critically endangered species has been discovered in Dong Mo Lake in Vietnam.

The Hanoi Department of Agriculture and Rural Development,Asian Turtle Program (ATP) of Indo-Myanmar Conservation (IMC) and the Wildlife Conservation Society (WCS) have worked very hard to ensure that this species does not go extinct.

According to Nhan Dan Online, the Voice of the Party, State and People of Vietnam, DNA tests of the reptile confirmed that the chelonian found in Dong Mo Lake is indeed a Yangtze giant soft-shell turtle, also known as the Hoan Kiem turtle or Swinhoe’s softshell turtle.

“This is a very important mission and it needs to be done effectively. We have been seeking advice and consultation from the Hanoi People’s Committee to promulgate guiding documents and to collaborate with international organisations to execute our development and conservation plan of Rafetus swinhoei,” Nguyen Huy Dang, deputy director of Hanoi Department of Agriculture and Rural Development said in a statement. “Hanoi Department of Fisheries has been assigned to continue implementing the Plan #200 from the Hanoi People’s Committee to revive and preserve the Swinhoe’s Softshell Turtle, a rare, precious and endangered species listed in Vietnam’s Red Data Book and the IUCN Red List.”

The female, which weighed in at 86kg before it was released back into the lake, was not the only one of its species in the lake as another, larger specimen was also observed in the lake. It is estimated to weigh 130kg and it is hoped that it is a male. It is thought that the only known male left in the world is at the Suzhou Zoo. The zoo had attempted to breed that male with China Girl, the turtle who died in 2019, since 2009 with no success.

“It is so important that we are taking these steps, confirming the sex of the identified animals, and in the case of the animal in Xuan Khanh Lake confirming the species, as currently this has only been based on Environmental DNA,” Timothy McCormack, Programme Director of the ATP/IMC said. “Once we know the sex of the animals in Vietnam, we can make a clear plan on the next steps, hopefully we have a male and a female, in which case breeding and recovery of the species becomes a real possibility. At the same time, our surveys in other areas of Vietnam suggest other animals might still survive in the wild, we need to be looking at bringing these together as part of the broader conservation plan for the species.”

It is hoped that the second turtle that was sighted can be captured to determine the sex and then released. Another turtle was spotted in Xuan Khanh Lake and researchers hope to determine its sex as well. It is hoped that a breeding program can be established so these turtles can once again be found in large numbers in the wild.

The Yangtze giant soft-shell turtle is native to China and Vietnam. There are only five known living individuals, three of which are males in captivity, and the two in Vietnam that are in the wild. The species is now functionally extinct, unless a female in the wild is located and successfully bred.