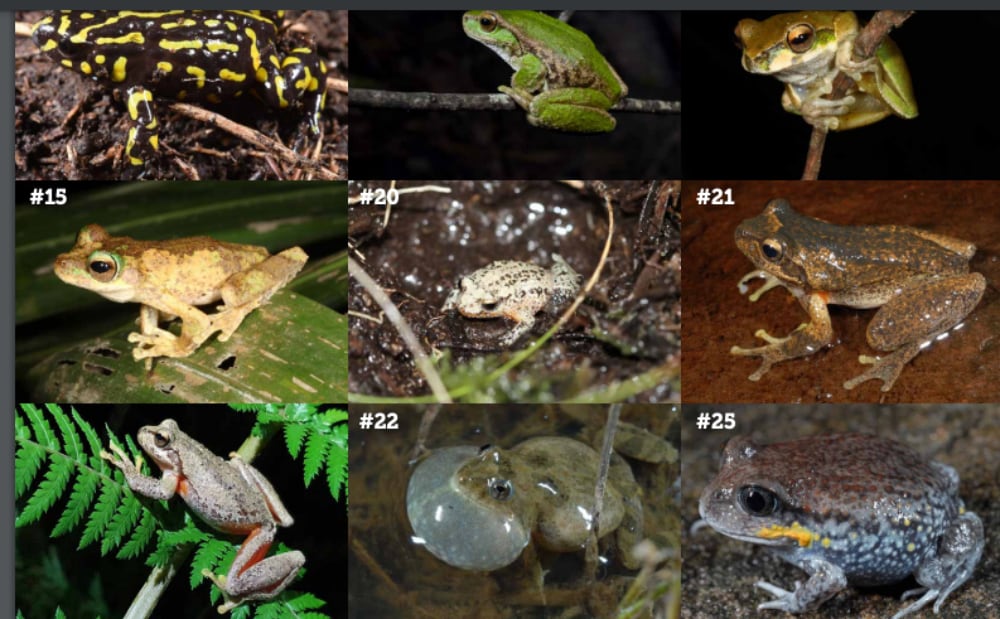 The white-bellied frog (Geocrinia alba) has joined 25 other frog species in Australia on that country’s list of species at greatest risk of extinction, according to a researcher paper published in Pacific Conservation Biology.

In the study, the researchers found that eight species have a greater than 50 percent chance of becoming extinct by 2040, with the chytrid fungus (chytridiomycosis) as the primary driver of extinction. Five species are at a moderate to high risk (30 to 50 recent chance) due to climate change.

Geocrinia alba is the only Western Australian frog to make the list and is only known to exist in several square kilometers of habitat in the Margaret River region.

“The white-bellied frog is probably not what most people would think of as a typical frog. They weigh in at only a gram or so as an adult, and they’re entirely terrestrial, living all of their life-stages on land, even as a tadpole,” Emily Hoffmann, a PhD student at UWA’s School of Biological Sciences said in a press release released by the University of Western Australia.

“Females lay their eggs in shallow depressions in moist boggy soils and the eggs develop into baby frogs entirely within a jelly-filled burrow. They then take two or three years to mature into adults. And they don’t move far, potentially only a matter of metres in their lifetime,” Hoffmann said.

Hoffmann said the main threats to the species are the changes in their breeding grounds as well as the clearing of protective vegetation, a warming and drying climate as well as groundwater interruptions.

Emily Hoffmann, co-author of the study, is investigating the decline of the white-bellied frog for her thesis. Photo by University of Western Australia

“Currently over a third of the world’s amphibians are threatened with extinction and populations are declining at unprecedented rates. A close relative of the white-bellied frog in the south west, the orange-bellied frog, is also under threat, as is the sunset frog which lives near Walpole,” Hoffmann said.

The white-bellied frog is no bigger than a human fingernail in size and inhabits a small range between the Margaret River and Augusta, Western Australia. It was discovered in the early 1980s and fully described in 1989. It is listed as critically endangered on the IUCN Red List and the Western Australian Department of Environment and Conservation has the amphibian listed as endangered under the Australian government’s The Environment Protection and Biodiversity Conservation Act of 1999

The complete research paper, “Red hot frogs: identifying the Australian frogs most at risk of extinction” can be read on the Pacific Conservation Biology website.