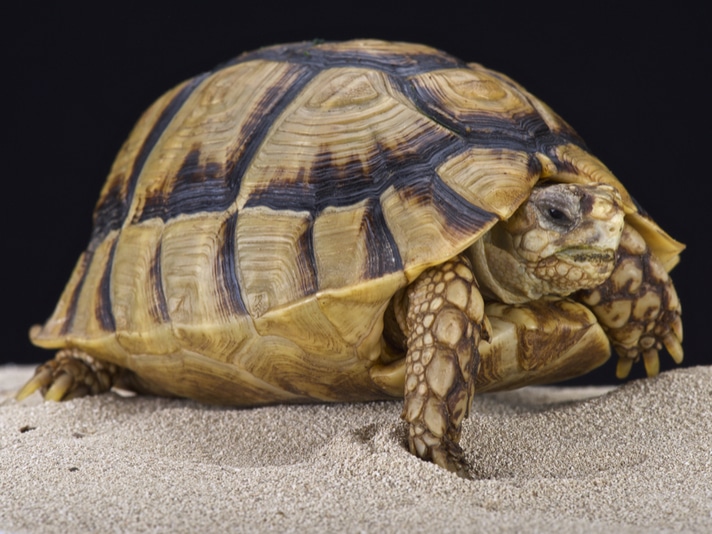 The following is not a "how to" guide on breeding the Egyptian tortoise (Testudo kleinmanni) but rather some observations made over a five-year period when I had some luck breeding the Egyptian tortoise. During some years I experienced quite a bit of breeding success, but it is still difficult for me to speculate on exactly what gets the amorous juices flowing with this appealing little tortoise. 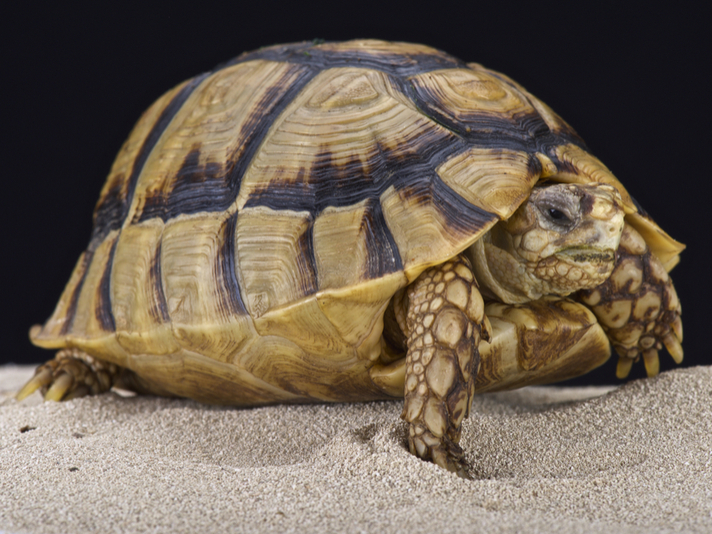 Over the years I found that a single female Egyptian tortoise could lay anywhere from one to four eggs per clutch and deposit up to four clutches over a given season.

In the fall of 1992, I obtained my first group of Egyptian tortoises. At that time, few people had even heard of this tortoise or kept it, let alone breed it. The first couple of years were a very hard struggle just to keep the little tortoises alive, because so little was known of these tortoises and their shy demeanor. They did not do well at all in a contained environment. I believe that the outdoor climate in my hometown of San Diego, California, had a great deal to do with my following success.

In the spring of 1993, Egyptian tortoises were beginning to be imported into the United States in large numbers, so I added a second group to my herd. These tortoises, two males and seven females, together formed the core of the tortoise breeding group.

The first Egyptian tortoise mating occurred during the first week of May in 1993. I observed the tortoises breeding on an almost daily basis until the second week of September. Temperatures and conditions were very hot and dry, with temperatures regularly hovering around 31 degrees Celsius (87.8 degrees Fahrenheit) and above by 10 in the morning. The Egyptian tortoises seemed to respond well to this climate.

The first occurrence of Egyptian tortoise nesting was observed on the second week in July of 1993. A tortoise nest was discovered that contained three tortoise eggs. The day after I found the first three eggs, I found another two in the very same nest. These eggs were not overlooked but were deposited by the female tortoise after I removed the first eggs. This turned out to be a common pattern, with females depositing eggs over a couple of days. They accomplish this by nesting, filling in the nest and depositing again at a later date in the same nest. Nesting usually took place in the early morning and late afternoon, with the majority of the nesting occurring in the early morning. The Egyptian tortoise nests were always located either under a clump of grass where the grass concealed both the tortoise and the nest or under some other form of structure that the tortoise could fit under. Upon completion of their nests, the Egyptian tortoises would thoroughly cover and scratch the surface over them, in addition to the vicinity around the nests, concealing their location.

Over the years I found that a single female Egyptian tortoise could lay anywhere from one to four eggs per clutch and deposit up to four clutches over a given season. The largest number of eggs deposited by one female in a single season was a phenomenal 11 eggs. This shows that this little tortoise can be quite productive. The eggs were ovoid in shape and ranged in size from a low of 8.9 grams to a high of 12.8 grams. Over a three-year period, 68 eggs were produced from seven females, with 41 of these hatching.

When the first Egyptian tortoise eggs were laid in my collection, I removed them from the natural nest and placed them on vermiculite that contained water in a 1:1 ratio, by weight. Unfortunately, this was too moist. Many of the tortoise eggs would crack or explode before hatching. I believed that humidity was the cause of this, so the eggs were then moved to silica sand and initially moistened ever so slightly on initial introduction of the eggs to the sand. No water was added after this. This seems to alleviate the problem of the tortoise eggs rupturing.

I incubated the Egyptian tortoise eggs at a temperature of 28 to 31 degrees Celsius (82.4 to 87.8 degrees Fahrenheit) with the assumption that the sex of the hatchlings was dependent on incubation temperatures (common with reptiles) and that the crossover point was about 30 degrees Celsius (86 degrees Fahrenheit) as has been determined with other Testudo species. I allowed the temperature to vary in hopes of producing a good mix of males and females. I later found that among the hatchlings where sex was determined, roughly 25 percent of those hatched were females and 75 percent were males. Incubation time took anywhere from 85 to 126 days. Right about 95 days the tortoise eggs were checked for any little noses poking out. When hatching started it was cause for major jubilation. Even with later clutches of eggs, this feeling has remained the same.

I thoroughly enjoy Egyptian tortoises and encourage other breeders of Testudo kleinmanni to share some of their data and thoughts about breeding this enigmatic tortoise species.