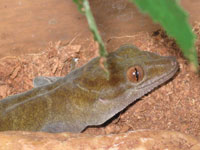 How to breed healthy Gekko ulikovskii.

Golden geckos (Gekko ulikovskii) have simple care requirements, and breeding them is not a difficult undertaking. These vivacious geckos hail from Vietnam, and they boast bright colors and unique personalities. Golden geckos will typically breed on their own if they are kept pairs in ideal conditions. 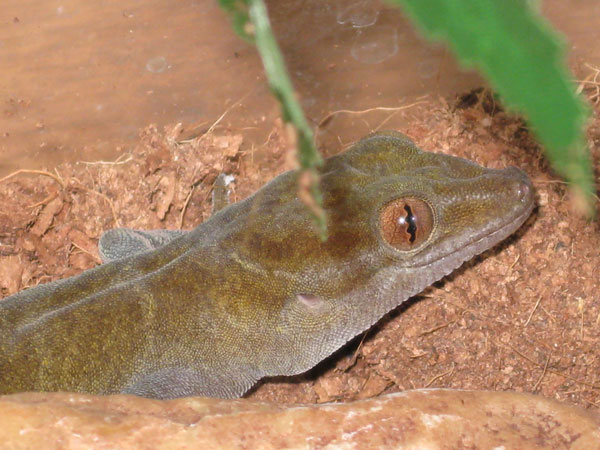 The golden gecko from Vietnam is easy to breed as long as you meet its captive care needs.

A pair will fit comfortably in a standard 29-gallon terrarium. Golden geckos are incredibly active, and they thrive in larger spaces, so the bigger, the better. Only one male should be kept per enclosure. It is not a bad idea to keep more than one female in a breeding enclosure. Be sure to keep a close eye on newly introduced geckos, as the more established ones may become territorial. Separate any geckos that become aggressive. To reduce stress on females about to lay eggs, keeping them alone in an enclosure is not a bad idea.

Adult golden geckos are not exceptionally difficult to sex. Male geckos will have visible femoral pores, and large hemipenal bulges at the base of the tail. Males also tend to grow larger than females. It is difficult to sex young golden geckos, as they all resemble females. As such, be careful placing young geckos together, as there could be multiple males.

Both male and female geckos will sometimes make a chirping noise, particularly when looking to breed. This sound can vary, resembling anything from a cricket chirping to a clucking noise. Some geckos will become very vocal, but it is not unusual for others to make little to no noise.

Adequate calcium is important for optimum egg production. A supplement powder can be added to food (dusted on insects or sprinkled on top of fruit). Some female geckos will accept calcium powder on its own, straight from a dish, so it is worthwhile to keep a small, shallow dish of calcium powder in the terrarium. Females will develop pouches just behind the head. These sacks are for calcium storage, and they slim down after eggs have been laid.

Golden geckos are "egg gluers," and as such, their eggs are not removable from where they were laid. The white eggs are often found stuck to dishes, hides or even the glass sides of the terrarium. Females will lay one or two eggs at a time. Because the eggs cannot be moved easily, particularly if they are stuck to the enclosure itself, there are several ways of separating the adults from the eggs if desired. The first is to secure a ventilated deli cup over the eggs, and the second is to remove the adults from the terrarium entirely. The adults do not typically pose a threat to their eggs. They can remain in the enclosure with the eggs until they hatch. Female geckos are often protective of their eggs, and sometimes their young for a time. It is a good idea to raise each gecko in its own enclosure to reduce stress.

The incubation period for golden gecko eggs can range anywhere from 65 to more than 100 days, depending on the temperature. Eggs kept around 80 degrees Fahrenheit typically hatch in around 65 days. Eggs simply kept in the terrarium, with a temperature of around 75 degrees, will hatch after around 80 days. A warmer terrarium temperature usually yields a faster hatch, but avoid keeping them any warmer than 85 degrees.
Keep the humidity at around 80 percent. Care for the baby geckos is identical to that of the adults, as long as appropriately sized food items are offered. Young geckos may be less interested in fruit than the adults, so be sure they are getting proper nutrition from insects, such as small, gut-loaded crickets. Dust their food with a calcium and a vitamin and mineral supplement twice a week.

Rebecca Scott has kept reptiles for most of her life, and golden geckos were her first successful breeding project. Her first golden gecko, a female named Lassie, is 10 years old and still with her today. She is currently pursuing a degree at the University of Iowa.