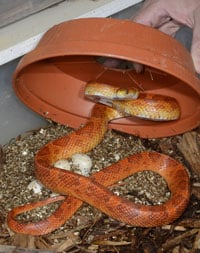 How To Breed The Popular Corn Snake

Pantherophis guttatus (formerly classified as Elaphe guttata) is easy to breed if you provide the right temperature and photoperiod triggers.

An essential first step to breeding Pantherophis guttatus (formerly classified as Elaphe guttata) is to learn to properly sex your corn snakes. Always check immediately after acquiring them in order to avoid raising a same-sex pair for years before finding the mistake. Probing for hemipenes is the preferred method, and popping (manually everting the hemipenes) works well on juvenile specimens.

Most herpetoculturists practice a schedule of environmentally conditioning their breeder-sized corn snakes (typically those that have obtained a total length of approximately three feet). In my opinion, temperature and photoperiod are both important triggers of reproduction in corns. Let corns experience a cooler period that coincides naturally with the shorter day lengths of winter. Decades of experience have taught us that this period does not have to be very exact or constant, just noticeably lower so the snakes’ reproductive systems know it’s that time. The internal formation of male and female sex cells need this cooler rest period. 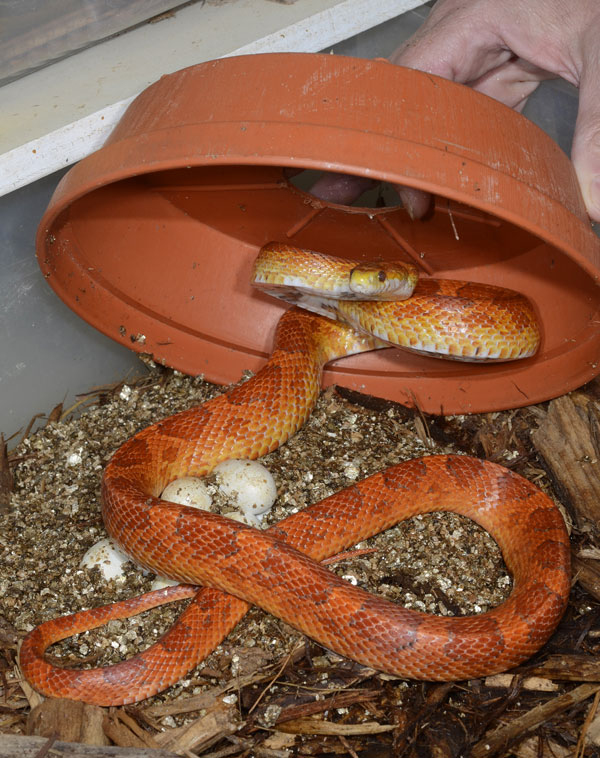 The author provided damp nesting material in a dark hide box for this female to deposit her clutch inside.

I aim for a cool season in the 45- to 65-degree Fahrenheit range for 60 to 75 days, but it’s not a factor that must be critically monitored or controlled. Don’t fret the odd extremes. As long as it stays generally cooler and darker for the majority of the dormancy period, that’s apparently sufficient to replicate a normal winter. A hibernation temperature consistently above this level can cause snakes to burn fat reserves (when they aren’t being fed) and enter the spring reproductive season thinner and weaker than they should be. Temperatures in the 50s are probably the best if you can maintain them. Disturb corns minimally during the entire two- to two-and-a-half-month cool period, except to clean and refill water bowls.

To manipulate the photoperiod, keep corn snakes in a completely darkened room during the cool period. Set a timer so the lights come on for 9 to 10 hours per day when you decide to commence the start of spring. Increase the duration of light by 15 to 30 minutes every two weeks over the next several months.

Simulate spring’s arrival like this for your entire collection at the same time to assure that all corn snakes’ hormones will flow in unison. You want your males’ and females’ reproductive physiologies to be primed to procreate at the same time.

Post-hibernation shedding, often several weeks and many meals after the warm-up time started, is generally believed to be a reliable signal of the start of the active breeding season. Experience helps in recognizing the subtle signs of ovulation in females—mainly the bulging posterior halves of their bodies. Their appearance very much resembles the look of well-fed snakes except that the bulges tend to be more lateral and soft and squishy to the touch.

When a female is ready to mate, the male will be ready, too! Misting the breeding enclosure and its occupants with an atomizer bottle of room-temperature water raises the humidity, which enhances the spread and recognition of the female’s pheromones. The male will usually take an immediate interest in any new snake in his territory. If a female is detected, he then tries to line up their bodies. When the cloacal openings of the snakes are lined up facing one another, a sudden pulse pushes one hemipenis into the female. The tails typically rise slowly upward, partly intertwined and almost side-by-side after 5 or 10 seconds. The pair stays locked in this position for 10 to 20 minutes on average.

Gravid females usually continue to feed ravenously for an additional three to five weeks after mating before the enlarging eggs in their oviducts make passing food or fecal matter uncomfortable. Their appetites will slacken or quit completely as the females approach their prenatal shed. Note that males will often refuse most, or all, food during the breeding season. Continue to offer food once per week, but don’t be concerned unless your male becomes thin or looks unhealthy.  In that case, remove him from the room housing females and lengthen his photoperiod to let him know that breeding season is over.

Just before the prenatal shed (the one just prior to laying eggs, typically four to six weeks after mating) is the time to prepare a nesting container for the female. Gravid corns seek out a secret, sheltered place with high humidity to deposit a clutch of eggs. Translucent plastic food storage tubs with snap-on lids have proven to be ideally suited for our nest box needs. A single round entrance hole about twice the female’s widest diameter is cut in the top of a box that has the capacity to hold at least two snakes the size of your female.
Female corns like to burrow into the nesting box substrate and shove it aside to form a nesting cavity. Sphagnum moss makes an excellent substrate. Moist vermiculite or crumpled paper towels are fine, too. Place the nest box in the cage when you first notice the female’s eyes clouding. She may find it convenient to rest in a moist alcove to hasten loosening her old skin before the prenatal shed.

Corns generally lay their eggs 30 to 45 days after mating. This is usually one to two weeks after their prenatal sheds. They may lay the clutch any time of night or day, and the process may span from an hour or two to a couple days in abnormal cases. As soon as we notice she has laid the clutch, I take the egg mass away. If she’s extremely thin, I offer her one or two fuzzy mice, smaller than her own diameter, right away as a tiny boost before her eyes go opaque again. Some females will accept such snacks immediately; others refuse them.

The average number of eggs per clutch ranges between 10 and 30 eggs. Young or undersized specimens tend to lay low numbers of physically large eggs. Good eggs are quite hardy, and will usually hatch, even if some in the clutch die and rot while clinging to the good ones. My favorite incubation media are sphagnum moss or coarse vermiculite. If the material is damp, but not wet enough to drip water when squeezed, and is non toxic, it should work to incubate corn snake eggs. A temperature of 90 degrees Fahrenheit seems to be the upper limit tolerated without increasing birth defects and mortality, but hatchlings seem more robust when eggs are incubated in the lower to mid 80s.

Eggs often dent inward several days before hatching. If they dent much earlier, they are too dry. If mold or fungus forms on eggs or substrate, they may be too moist, and will need some airing out. An old saying goes "Good eggs don’t go bad”; i.e. if the temperature and humidity are more-or-less right, they’ll hatch.

With all of the online and offline resources available today, your journey into the ever-expanding universe of corn morphs promises to be a colorful and exciting experience.