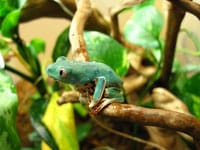 How To Breed Tiger-Leg Monkey Frogs In Captivity

Breeding Phyllomedusa hypochondrialis is not difficult as long as you follow these tips.

Unlike their cousin Phyllomedusa hypochondrialis, the tiger-leg monkey frog (Phyllomedusa tomopterna) is not commonly bred in captivity. This is unfortunate because they are beautiful animals that make outstanding captives if captive-bred stock can be located. Instead, more often, wild-caught frogs are offered for sale, and they can prove tricky to acclimate to captivity. If you plan to keep tiger-leg monkey frogs, think about attempting to breed them to help increase the numbers of quality animals available in the pet trade. Not only will you be helping establish an uncommonly bred frog within herpetoculture, but you also get the opportunity to enjoy raising tiger-leg monkey frog tadpoles and viewing their complete life cycle. 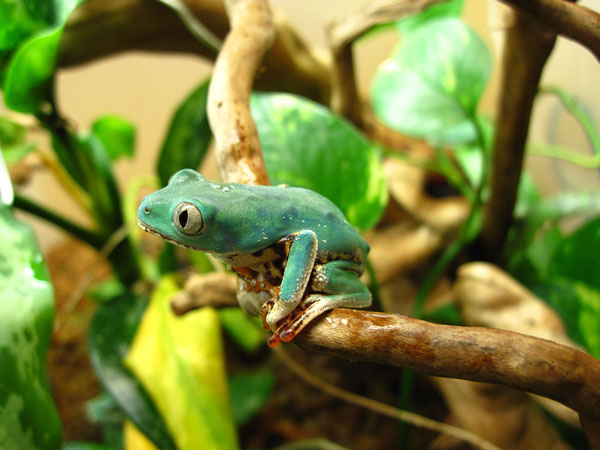 In the Amazon rain forest, tiger-leg monkey frogs breed during the wettest half of the year.

In the Amazon rain forest, tiger-leg monkey frogs breed during the wettest half of the year, which is from November to May. Regular heavy rains and the resulting formation of temporary ponds likely help trigger breeding in nature.

Like other monkey frogs, tiger-legs reproduce by wrapping their eggs in a leafy nest above water. As few as 38 to nearly 100 eggs are deposited within two to three leaves, which are then sealed together with ovum-less egg jelly around the edges. As tadpoles hatch from in-between the leaves, they wriggle free and drop down into the water of the pond below.

Male tiger-leg monkey frogs are smaller than females and grow to between 1.7 and 2.1 inches in length. Large females can grow to almost 2.4 inches and may appear more rotund or broader in body structure than males. Male tiger-legs also vocalize, while females remain silent. If you’re goal is to breed monkey frogs, start with a large male-biased group. Six or more males and three or four females would be ideal.

Following a prolonged period where temperature and humidity have remained fairly constant, or even a little cool and dry, begin to mist the terrarium heavily with water several times each day. Consider restricting ventilation by taping a piece of glass or plastic wrap over half of the enclosure’s screen cover, which in combination with heavy misting will boost humidity levels. You’re goal is to replicate the onset of heavy rains, and if all goes well, males will begin to call each night as soon as the lights go off.

At the same time you are increasing the frequency with which the terrarium is misted, begin feeding the frogs every night. Use a variety of foods, including crickets, flies and roaches, if possible. Monitor frogs to make sure there are no leftover food items during the day that could nibble on a sleeping monkey frog and cause harm, but otherwise feed as much as the frogs will eat each night. Feed and mist heavily for a week or longer until frogs have put on substantial weight and the males vocalize frequently.

Rain Chamber in the Terrarium

If females look full of eggs and males are calling, it is time to move the group to a rain chamber. Often, breeders report the best success with monkey frogs when the move to the rain chamber is timed to match the arrival of a thunderstorm or a particularly rainy week. It’s thought that perhaps the change in atmospheric pressure and other subtle environmental changes caused by heavy rains can help stimulate breeding in captive tree frogs.

To create a rain chamber, fill a large, vertically oriented enclosure with 2 to 3 inches of water and submerge a pump in the bottom. Normally, an aquarium pump rated to 100 gallons per hour (gph) or less is more than adequate. Attach flexible tubing to the output of the pump and run it to the top of the enclosure, crisscrossing several times. Plastic wire ties or fishing line can be used to secure the tube in place. Puncture the tube with small holes, plug the open end with filter foam or tie it shut with a wire tie, and turn on the pump to make it rain. You may need to adjust the amount of holes in the tube or the output of the pump so that drops form rather than steady streams of water.

Consider also placing a fully submersible aquarium heater with thermostat in the water so you can adjust the water temperature. It is worth experimenting with different water temperatures to see if they help stimulate reproduction. Normally, setting the heater somewhere between 70 and 80 degrees Fahrenheit is adequate.

Crucial to breeding tiger-leg monkey frogs is providing the right plants with the right leaves, and lots of them. Varieties of Philodendron and golden pothos (Epipremnum aureum) will work and can be grown in large pots of aquarium gravel placed in the water at the bottom of the rain chamber. Drape the plants over the tubing from which the water rains at the top, securing them in place so there are plenty of leaves hanging above the water where eggs can be deposited.

Watch for amplexus at night, and check for eggs each day. Eggs will be wrapped in leaves and may not be obvious if there are lots of plants. If after a week or two breeding has still not occurred, move the frogs back to their normal terrarium, continue feeding heavily for several weeks and then return the group to the rain chamber. Adjust water temperature and the frequency with which the pump is on to produce rain. You can plug the pump into a timer so that it is set to go on automatically for anywhere from half an hour to 6 hours or more per night. It can be frustrating when frogs are conditioned for breeding yet still do not reproduce, but if it is the first time, don’t fret. Be patient and try again a few months later.

Once eggs are noticed, you can either remove the leaf nest to a separate aquarium and suspend it several inches above water, or simply remove the frogs from the rain chamber so they do not disturb the eggs and wait for the tadpoles to hatch inside. Tadpoles can then be scooped out of the water in the rain chamber several days after hatching and moved to an aquarium.

In the wild, around 70 eggs per clutch is a normal amount, and in captivity, maintaining this many tadpoles will require a 10- to 15-gallon aquarium. Filter water with a sponge filter once tadpoles begin to actively feed, which may take several days to a week after hatching. Food can consist of tropical fish flake, offering as much as tadpoles can consume within a couple hours each day. Heat water with a submersible aquarium heater to between 75 and 80 degrees and perform frequent partial water changes, replacing 25 to 50 percent or more water at least once per week.

Once front arms are noticed, move the tailed juveniles to a small container with shallow water (around a half-inch deep) to prevent drowning. You can place a few dead leaves or a clipping of Philodendron in the container to further help ensure frogs develop safely until their tail is completely absorbed.

Once the tail is gone, move juveniles to a 5- or 10-gallon aquarium with moist paper towel substrate, a small water dish, and a couple live or artificial plants. They will need to be fed small crickets or flightless fruit flies every night, always supplemented with a quality vitamin and mineral supplement. Offer UVB lighting and provide a temperature range the same as for adults, between 75 and 82 degrees during the day, dropping by 5 to 10 degrees at night. Juvenile monkey frogs grow quickly when they are fed daily, reaching adult size in less than a year.