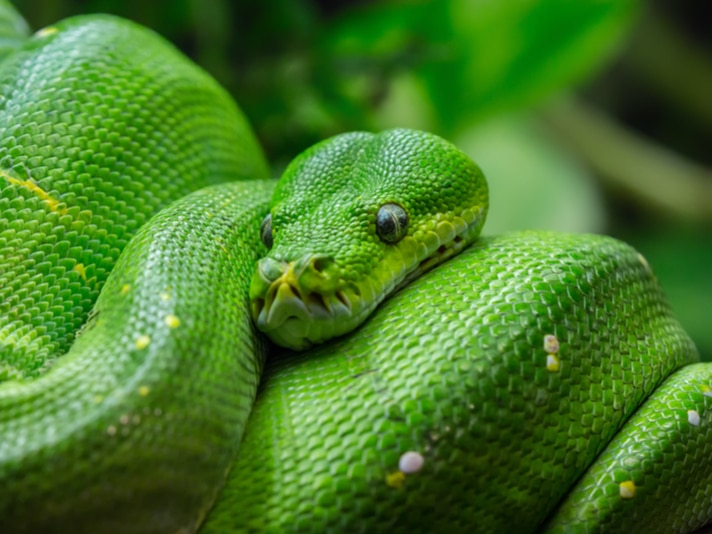 Morelia viridis presents some challenges when it comes to breeding. Follow these instructions for success.

Green tree pythons (Morelia viridis) have a long history of captive reproduction, and there are more people breeding them now than ever before. Many of the initial challenges of egg incubation and establishing newborns have been overcome. Still, this is not what most would call an easy species to breed. 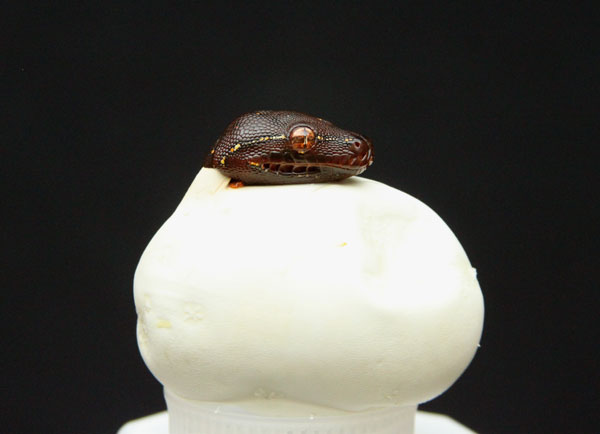 Let a hatchling emerge from its egg at its own pace.

Any breeding program must begin with healthy adult animals. Females should have sufficient body weight to undergo the stress of egg production. Having tracked many females’ follicle development using an ultrasound machine over the past several seasons, we have discovered that young females will first begin growing follicles once they reach a weight of 750 to 800 grams. Females should not be paired until they reach this weight. Under normal captive conditions, most females attain this weight within 3 to 4 years of age. Breeding males can be considerably less in weight because they are typically smaller as adults. Males of only 270 grams have bred successfully.

Normal temperature cycles used for other boa and python species seem to work well with this species, as well. An increase in the nighttime temperature drop into the low-70-degrees-Fahrenheit range, along with a slight decrease of 2 to 4 degrees in the daytime highs for a period of four to eight weeks, should trigger reproductive interest in both sexes. Breeding introductions can begin toward the midpoint and continue to the end of this cycling period.

Pairing animals is best done during daylight hours so as to avoid any accidental bites due to feeding response. Males will normally court and copulate with females that are properly conditioned shortly after dark. Pairs may remain joined for several hours and even into the next morning.

After copulating over a period of several weeks, the female will begin to lose interest in food and her color may change. Her overall color will typically dull, and some animals may take on a predominantly blue coloration. When the ovulation process begins, the female will develop a large, mid-body swelling—this will have the appearance of the female having eaten an excessively large meal. The swelling normally lasts from 12 to 24 hours, and the female will appear uncomfortable and restless. Some females can be good at hiding their ovulation, so careful observation is necessary at this time. Once ovulation has occurred, it will be important to watch for the female’s next shed. That will be a clear indication that egg deposition will occur in two to three weeks.

Once you know the female is gravid, you should provide her with a comfortable place to deposit eggs. This normally means installing a nest box. Our nest boxes measure 8 inches long by 8 inches wide by 12 inches high, and they are mounted mid-level within the enclosure. They can be constructed of wood or plastic. A wide variety of nesting facilities have been used by breeders, including lidded plastic buckets and overturned flower pots. The box should have an entry hole or slot cut into it that is at least 2 to 3 inches in diameter.

A layer of dry sphagnum moss, coconut fiber, vermiculite or newspaper can be placed inside the nest box. This substrate aids the female in the creation of a secure nest site and helps ensure the eggs do not stick to the surface of the nest box. Typical clutch size is 12 to 18 eggs, but we have had clutches as large as 45 eggs. Captive green tree pythons have laid eggs in all months of the year. In captivity, most eggs are laid in the spring and summer. In the wild, most eggs hatch at the beginning of the wet season as neonate prey availability becomes more prevalent.

Just like other python species, female green tree pythons will maternally incubate their eggs. The maternal incubation period is normally 49 or 50 days, and although this may be the most natural method, it does have several drawbacks. It increases the time a female is without food—most females will stop feeding when gravid and will not take a meal until after the clutch has hatched. This will dramatically increase the stress on the female and will certainly limit her ability to reproduce again the following year. Monitoring the condition of the eggs is made far more difficult with maternal incubation, and a single bad egg can cause an entire clutch to deteriorate.

Artificial incubation has become the more widespread technique of choice. There are now several manufacturers of high quality incubators. They are available at reasonable prices or you can choose to build your own.

Sphagnum moss, vermiculite and perlite are commonly used as incubation media for reptile eggs and have been used successfully for green tree pythons. In recent years, many breeders have moved to a no-substrate method for incubating various python eggs. This involves suspending the eggs above a reservoir of water, and it has the advantage of maintaining a high level of humidity without allowing the eggs to come into contact with moist or wet substrate. The temperature within the egg container should be maintained at 87 to 88 degrees throughout the incubation period. Temperatures above 90 degrees can be lethal to the eggs. The incubation period with the previous recommended temperature regimen is normally 50 to 55 days. Humidity levels within the egg box should remain above 90 percent during the entire incubation period, and the eggs should not come into contact with moisture or appear wet at any time. It is normal for healthy eggs to dent in or collapse slightly as they approach the time of hatching. The denting usually occurs between 10 and 14 days prior to hatching, and it should result in no more than an approximately 20 percent decrease in size.

At about day 49 or 50, the water should be replaced by damp paper towel to avoid drowning any hatchlings that emerge from the egg. It is also a good idea to add a perch or two in order for the babies to have someplace to rest once they emerge from the egg. Once the babies have hatched, they can be set up in individual containers. Tubs that house hatchlings up to approximately one year of age measure 13 inches long by 8 inches wide by 4 ½ inches high. Enclosure furnishings include a few simple perch options, a water bowl and heat source. Offer them food after their first shed. Prey size should be about equal to the diameter of the snake at mid body. The best success is achieved by tease-feeding with the use of tweezers or forceps. Some neonates will accept prey quickly, while others will be shy, retiring or be quick to flight. The key is patience and to find what works best for each individual. Pre-killed or frozen-thawed pink mice are the initial meal we offer neonates. Technique of prey motion plays an important role in tempting a neonate to show interest in, and initiate, a feeding response.

Remember that in the wild most neonates begin feeding on small frogs and lizards, which often exhibit short bursts of rapid movement often in an attempt to feed themselves, having been fooled by the caudal luring of the neonate green tree python. If you can replicate the movement patterns of these prey items, you will see an increased interest by the snakes to feed. The first few meals are often the most difficult, but once the babies have taken several meals, feeding gets much easier. We prefer to offer meals approximately every five to seven days once the first meals have been accepted. Stubborn neonates that are not accepting unscented prey are offered prey that has been scented with bird (day-old chick down or raw chicken skin—salmonella warning warranted) or frog scents. This is accomplished by gently washing the pink mouse to remove the mouse scent, and then rubbing it on the desired scent item. Often times, the neonate will accept the new scented prey with gusto. Patience and persistence will be pivotal to success, but also remember not every hatchling is meant to survive. Some just refuse and little can be done to save them.