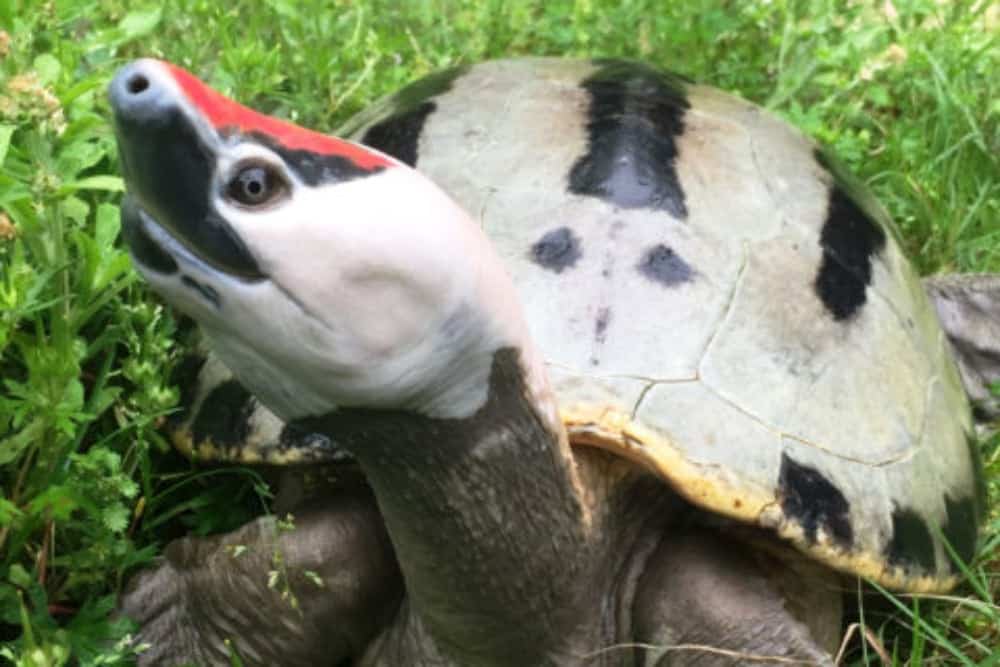 The Houston Zoo announced last week that it has successfully hatched four painted terrapin turtles (Batagur borneoensis), the first time the zoo has had success with this species.

“It’s the first time the Zoo has hatched painted terrapin turtles, one of the 25 most endangered species of turtles in the world, the zoo announced on its blog. “Painted terrapins are a medium-sized to large turtle species and inhabit the rivers in Southeast Asia. At the Houston Zoo, the adults can be seen at the Wortham World of Primates, in the water and on the shore, of the orangutan moat.”

The painted terrapin, also known as the  painted batagur, or saw-jawed turtle, is a critically endangered species that is native to Brunei, Indonesia (Sumatra and Kalimantan islands), Malaysia and Thailand. It is listed in The International Union for Conservation of Nature (IUCN), Appendix II. It is illegal to trade or sell wild caught specimens. The species suffers from poaching for its meat, the illegal pet trade, as well as habitat loss due to conversion of habitat for palm oil farming, shrimp and fish farming.

How Big is a Painted Turtle?

The species is large, with females reaching 24 inches in carapace length with weights of more than 50 pounds. Males reach 14 to 16 inches in carapace length. An interesting note with this species is the fact that females swim out to sea and nest on beaches alongside the green sea turtle. Clutches vary in size, from as few as half a dozen eggs up to clutches with 20+ eggs. The hatchlings can live in sea water until they migrate into the estuaries and rivers of their parents, where they spend the rest of their lives.

“The success in hatching this species was a collaborative effort between the primate, water quality, veterinary, and herpetology departments, the zoo wrote on its blog. “The primate keepers, along with the veterinarians, watch over the painted terrapin adults in the orangutan moat while the herpetology keepers monitored the incubation process. The careful year-round maintenance of the water temperature, by the water quality team, allowed the turtles to reproduce.”

While the female is drab in coloration during breeding season, the smaller male transforms with a white neck and head with a red diamond-like shape on its head, between and behind the eyes.

The zoo works to conserve these reptiles in Indonesia by supporting locals to protect them in Sumatra. These Indonesian conservation professionals watch over and protect the species as well as their nests. They also restore the native habitat as well.