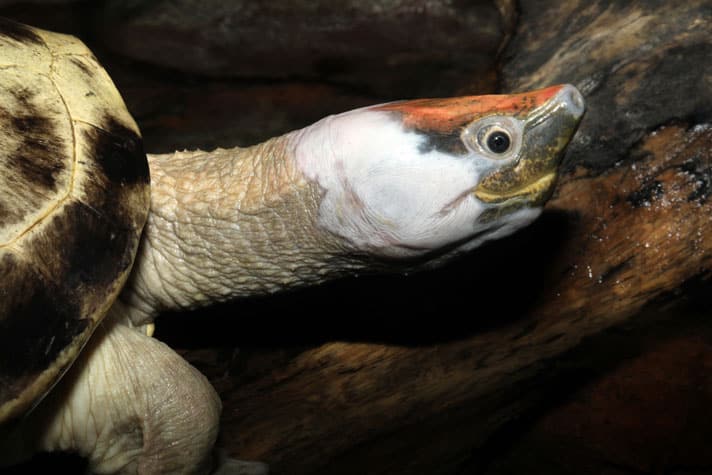 The painted terrapin (Batagur [Callagur] borneoensis) is a rare and interesting turtle found in the river systems and estuaries of Southeast Asia. While they actually live in some brackish water as well as freshwater, females will swim to the sea and nest on beaches alongside green sea turtles. Hatchlings can live in pure seawater until they migrate into the estuaries and rivers their parents came from. 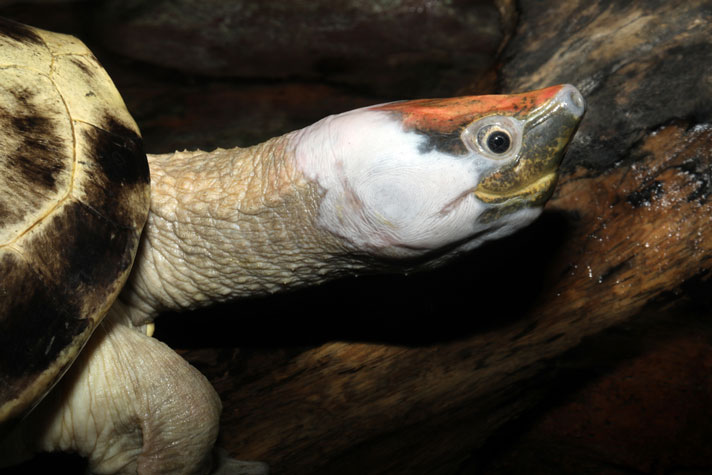 Batagur borneoensis can lay multiple clutches, and clutch size is quite variable.

Adults are large, with big females reaching 24 inches straight carapace length and weighing more than 50 pounds! Males are quite a bit smaller, reaching lengths between 14 to 16 inches SCL. Females are drab in appearance, with gray bodies and shells, and a subtle pattern of three broken lines running down the length of their carapace. Males are something else all together. They change color dramatically during breeding season. They transform from subdued grays and browns to one of the most beautiful turtles in the world. When in full breeding color, males have a striking white neck and head with a brilliant red diamond on the top, between and behind their eyes. Their shells become bolder, with a high contrast of light gray and a bold pattern of dark green to black running in three broken lines down the carapace length. The carapace also has a pattern of dark blotches running around the margin. At Dark Hammock Turtles, our painted terrapins actually change three or four times throughout the year. Whether this is due to captive conditions or occurs naturally, I do not know.

Our colony is quite large, consisting of 30 females and 11 males. We are also raising a number of 2007 and 2008 hatchlings, the largest of which are already 8 inches long. I have found B. borneoensis to be a hardy species, able to tolerate a wide variety of temperatures and conditions. Our adults were actually fed very little for months before we acquired them, but they were heavy and quite fat. We discovered that they had been coming out of the water and grazing like cattle.

Our painted terrapins are housed in a pond measuring 110 feet long, 35 feet wide and 9 feet deep. This pond has a constant supply of flowing well water and has a raised sand dune at one end. I have added a variety of plants, such as papyrus and foxtail palms, to the banks in an attempt to make it more naturalistic. The pond is kept stocked with water hyacinth and duckweed, which the turtles can graze on.

Painted terrapins love to bask. We provide ample places for the young and adults to do so. Adults bask on the banks, and hatchlings bask on platforms made of plastic-coated wire. Given that adults can get large, outdoor ponds are the best housing choice. An adult pair should have at least 1,000 gallons to be comfortable.

Hatchling and adult diets are largely herbivorous. We feed a variety of fruits and vegetables, including papaya, bananas, watermelon, cantaloupe, shredded squash and a variety of greens. They have a constant supply of water hyacinth and duckweed. Oddly, although most aquatic turtles will readily consume duckweed, I have never witnessed our adults eating it. It might be that they do but just not while I watch.

We supplement this diet with Mazuri Tortoise Chow and on occasion Turtle Chow, with which the adults will become very bold while eating. Although normally secretive, they will swim up to you if you have food. Males seem to be a bit shyer than females, but they can usually be observed eating as well. Care must be taken to avoid too much protein and fat, as these turtles can easily become obese. I advise a diet that has 15 percent or less protein and 5 percent or less fat. The rest should be made up of primarily greens.

I’ve never witnessed courtship and copulation behavior in our colony. Copulation may take place mainly at night, however, and with a large, deep pond to maneuver in, our painted terrapins might just stay out of sight while breeding. Seen or not, the proof that mating takes place is seen in the form of the fertile eggs we collect every year.

The turtles begin nesting in late January and lay eggs until June. Each year we’ve had them, they’ve begun a little earlier. In 2007, the first clutch was laid on Feb 11; in 2008, January 30; and in 2009, January 27. Painted terrapins nest almost exclusively at night. I have only ever witnessed one exception, in which a large girl laid in the late afternoon just before a rainstorm.

My experience has been that painted terrapins rarely ever just select a place and lay their eggs. They search thoroughly for the right spot, often digging multiple test holes and then abandoning them before finally laying. Once the female finds a suitable location, she digs a large nest chamber with her back feet, forcefully kicking the sand out in a U-shaped spray pattern that can stretch 5 feet from the nest. Following this U-shaped pattern to its point is a good method of locating the nest. On nights when multiple females have tested and nested, the laying area looks like it’s been bombed.

Batagur borneoensis can lay multiple clutches, and clutch size is quite variable. I’ve collected nests with as few as six eggs and as many as 28. The eggs are large and oblong, ranging from 21⁄2 to 31⁄2 inches long by 11⁄2 to 2 inches in diameter at the narrowest point. The egg shells are brittle and must be excavated carefully to avoid damage. If this brittle outer shell is damaged, all is not lost, as painted terrapin eggs have a leathery secondary layer. While these eggs will usually hatch, the hatchling will most likely emerge with slight shell distortions or indents due to the turtle forming around the misshapen portion of the damaged egg.

Our eggs are carefully washed and placed in sweaterboxes with a few inches of dampened, coarse vermiculite in the bottom. The ratio of vermiculite should be mixed about 1-1 weight of water to vermiculite. Painted terrapin eggs (particularly eggs with damaged shells) need high humidity levels. I cover about three-fourths of the entire egg with vermiculite so that a steady level of humidity is obtained over most of the egg’s surface. Leaving a bit sticking out is useful in determining if the egg is infertile or has gone bad. We have had success hatching at 80 degrees Fahrenheit in 2007 and 84 degrees in 2008. Once our ‘07 and ‘08 holdbacks reach maturity, we will have some idea as to whether temperature during incubation determines the sex of painted terrapins.

We have around a 75-percent hatch rate due to some infertility and losses from damaged eggs. Our eggs hatch in about 75 days.

Hatchling painted terrapins are energetic, and they will begin to eat within a week of fully absorbing their yolk sacs. These alert little guys are very hardy and will grow quickly given a varied diet of greens and fruits with any quality turtle food used to supplement a few times per week. Hatchlings are fed greens, other veggies and fruits daily, with turtle food offered two or three times a week.

Water quality is fairly important to small painted terrapins, as they tend to get fungal skin infections if kept in dirty, acidic or consistently cold water. Both adults and babies do well when the ambient temperature is above 75 degrees. That said, painted terrapins can withstand quite cold temperatures for short periods of time. One night last winter, the temperature outside here in Florida dropped below 20 degrees for a short time before sunrise. A comfortable nighttime temperature would be above 65 degrees.

Normally, our small painted terrapins are housed outside in 300- to 500-gallon vats with constantly running, 72-degree well water. On very cold nights, we lay blankets across the vats in order to insulate them from the cold. One night in particular was very windy, and the blankets blew off the vat, opening the vat’s drain in the process. The next morning I found an empty, exposed vat with nearly 30 partially frozen 4- to 6-inch painted terrapins! We warmed the babies gradually over the next few hours. By the next day, every single one was alert and active! None ended up showing any adverse signs resulting from this ordeal. Now our blankets are tied quite well on cold nights.

Batagur [Callagur] borneoensis is classified as Critically Endangered on the IUCN Red List. If you seek to own this turtle, be sure you are purchasing captive-bred specimens from reputable dealers. Make every attempt to know where the turtles originated.

These turtles and their eggs have been overharvested as food for decades by people in Southeast Asia. As a result, they are now threatened throughout their natural range. Habitat destruction and pollution put pressure on remaining populations. They are listed by the IUCN as Critically Endangered and are currently on CITES Appendix II. Adults and juveniles were imported in the latter 1990s and up until 2004. Shortly thereafter, export quotas were discontinued. Our turtles were imported by the now-defunct South Florida Reptile Exchange around the year 2000. They were kept in a small pond in Florida until we purchased them in 2006.

Our production, as well as the production from a few other breeders, has made captive-bred B. borneoensis available to private collectors. The turtles have become much more affordable as supply has increased.

These turtles have recently been reclassified from the Callagur genus to Batagur, but they are still more widely known as Callagur.

These turtles are both interesting and enjoyable as captives. Those who choose to keep painted terrapins will surely be rewarded the first time they see that brilliant white, black and red jewel staring up at them waiting to be fed!