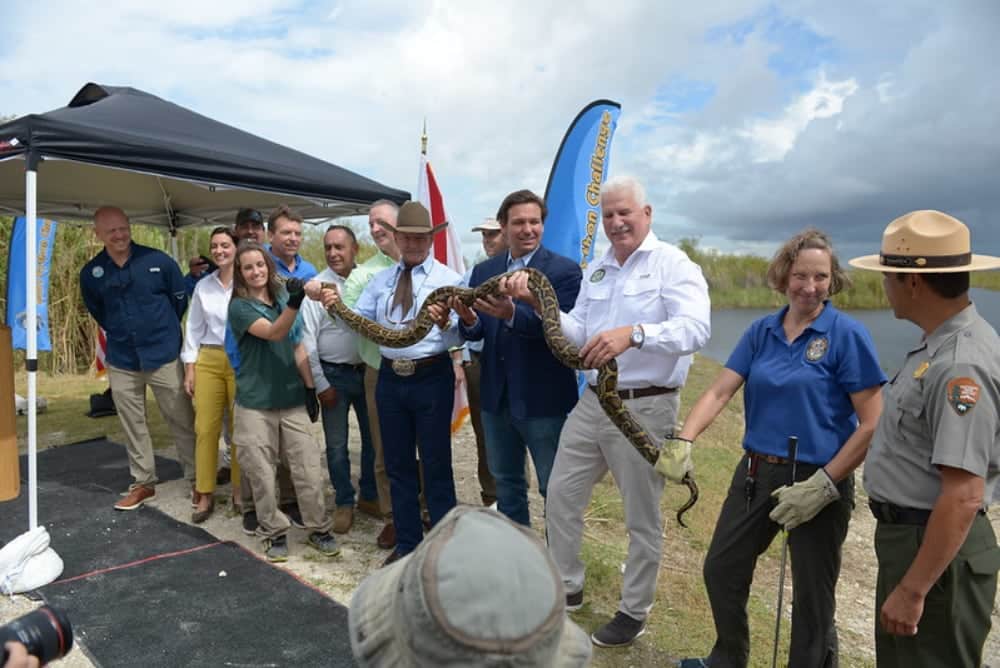 The 2021 Florida Python Challenge saw hunters remove 223 of the invasive Burmese pythons (Python molurus bivittatus) from south Florida during the 10-day competition, more than any other year. The challenge, which is held every year in an effort to raise awareness of invasive species in the state, was won by Charles Dachton, for his efforts in removing 41 snakes for the Ultimate Grand Prize of $10,000. The longest snake removed during the 10 day contest was 15 feet, 9 inches. Dusty Crum, a past winner of the event removed that reptile.

“Everglades restoration and the protection of water resources has been a top priority of my administration since day one. Invasive Burmese pythons have wreaked havoc in the Everglades, negatively impacting the ecosystem and biodiversity,” Gov. Ron DeSantis said in a statement released to the media.

“At my direction, FWC and the South Florida Water Management District have taken steps to increase python removal efforts, and the unprecedented success of the 2021 Florida Python Challenge® is a great example of the progress Florida has made battling these invasive species. Removing more than 200 Burmese pythons is a victory for our state as well as for the native animals that live here.”

The Python Challenge is divided into two categories: professional and novice. This year’s Ultimate Grand Prize winner went to Dachton, who is a novice.

Since the Florida Fish and Wildlife Conservation Commission (FWC) and the South Florida Water Management District combined efforts to remove Burmese pythons from the Everglades in 2017, more than 3,600 of the invasive snakes have been taken out of the Everglades. When the Python Challenge was first launched in 2013, a total of 68 snakes were captured. The 2016 Python Challenge resulted in more than 100 of the invasive snakes removed from the Everglades. This year marks the most snakes removed during the competition.

John Virata is the editor of REPTILES magazine and ReptilesMagazine.com. You can reach him at ReptilesEditor@gmail.com