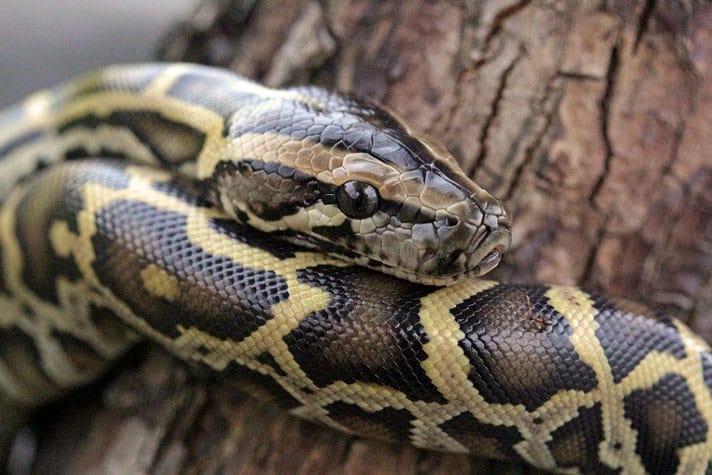 Burmese Pythons, because of their docile nature and undemanding requirements, are among the most suitable of the large snakes as captive animals. It’s been more than 35 years since I got my first Burmese, and the species still remains my favorite.

There’s no denying the popularity of the Burmese python. And as long as you’re sure you have the space to properly house one, you, too, should be able to discover why I still like them so much, after all these years. With proper snake supplies and reptile health and wellness in mind, this species is a great captive for dedicated keepers.

Burmese pythons are readily available in a variety of colors and patterns, with new traits and trait combinations becoming available with increasing frequency. They are typically available from captive breeders or reptile shop online. It is important to check local laws and regulations regarding the species.

Burmese pythons are among the largest snakes and can potentially reach lengths of more than 20 feet and weights in excess of 250 pounds. Snakes of this size, however, are unusual and do not reach these proportions quickly or by accident. Growth is rapid initially, but slows considerably after about 10 feet. The average adult Burmese in captivity is probably about 11 or 12 feet long.

Most importantly, the cage should safely contain the snake. After all, subsequent requirements are less important once the snake has disappeared into that hole in the wall behind the washing machine because you forgot to properly secure it.

The size of the enclosure should be large enough to allow the snake a reasonable amount of movement, yet small enough to permit accurate temperature and humidity control. Burmese pythons are terrestrial snakes that spend most of their time on the ground, so the floor space of their enclosure will be more important to the animal than the height of the cage.

A baby Burmese will require the space equivalent of a 10-gallon reptile terrariums. Larger individuals will need more space, of course. A 200-pound animal will need floor space measuring at least 4 feet by 8 feet. I recommend the enclosure have roughly the floor space equal to four to six times the area of the snake itself when it’s in a flat coil. The cage should also have a door that allows easy access and that can be closed securely. A glass or Plexiglas window for viewing is important, as well. Some ventilation is desirable, although not as much as one might initially think. Heat and humidity are easily lost through vents, especially through those on the top of the enclosure. Small vents located on the sides of the cage will permit adequate air exchange.

Wood, plastic and glass are all acceptable materials for cage construction. I use enclosures that are constructed of ABS plastic, and which have a smooth, nonporous finish that allows easy cleaning and sterilization.Snake habitat products may make this more difficult, so sometimes simplicity is the best option. All corners and edges are rounded, leaving no difficult-to-clean areas. The cages are lightweight, have large tempered glass viewing areas and, best of all, someone else has made them already. Regular and spot cleanings are required with proper reptile cleaning supplies.

There are several decent snake substrates available. It is virtually impossible to provide a naturalistic vivarium for a large python, unless only the sturdiest of materials are used. Substrates are generally selected for utility rather than aesthetics. Newspaper is absorbent, fairly sterile and readily available. Various woods, shavings and shredded substrate products are acceptable, too, although they tend to foul in moist environments.

Because Burmese pythons require temperatures above what we consider comfortable in our homes, it is necessary to raise the temperature of the enclosure with a supplemental heat source. This heat can be provided in several ways. I prefer to use a heat pad, such as the Zilla Heat Pad, or heat tape underneath the enclosure. Heat pads or undertank heaters are available in many pet shops that stock reptile supplies. They provide safe, even heating for smaller enclosures. Heat tape is also available and serves the same purpose, although it allows more flexibility in heating larger areas more economically. Various types of snake heat lamps are also available and effective, as well. There are many types of reptile heat lamps and fixtures you can choose from.

The temperature of the enclosure can be regulated in several ways. In the first and most primitive way, the temperature can be controlled by initially selecting a heater with an output that provides the acceptable amount of heat. If ambient conditions outside the enclosure are constant and the heater output remains the same, then the temperature inside the cage should remain constant, as well. It is difficult to select a heater with exactly the heat output necessary, and constant conditions outside the cage are not always as constant as they might be. A rheostat or dimmer switch can adjust the heat output of a heater by adjusting the power input, the other problem can be overcome by using a controller with a feedback system.

Because a thermostat monitors the temperature of the enclosure and activates the heater to add heat when appropriate, it is by far the best method for controlling cage temperature. There are two types of thermostats on the market for use in herp-related applications. The conventional on/off type operates like the thermostat in your house; it senses when the temperature has dropped below a certain level and directs the heater to add heat until the set temperature is reached, such as the Zilla Terrarium Heat & Habitat Controller for Reptiles. A proportional thermostat is much like a rheostat with a feedback system. The thermostat continuously monitors the temperature and makes slight adjustments in the electrical current to the heater. In this type, the heat is always on, but only at the level necessary to maintain the set temperature. Proportional thermostats eliminate the fluctuations caused by the on/off cycle of conventional-type thermostats and provide a continuous warmth from the heat source. I recommend (and sell, wouldn’t you know) the Biostat line of thermostats. Wild Burmese pythons live in areas of high humidity, and captive animals require the same. Adding heat to the enclosure can dry it out and provisions must be made to retain moisture. A tightly constructed cage with a water bowl and minimal air vents should keep the relative humidity above 60 percent or so. Wooden cages should be painted and sealed.

Aquariums with screen tops are difficult to regulate. Heat rises and escapes through the top, requiring additional heat to maintain the appropriate temperature, which further dries out the enclosure. Aquariums should be used with tops that restrict heat and moisture loss.

Feeding Burmese pythons is fairly simple. I feed an appropriately sized meal whenever the snake is hungry. Baby Burmese pythons can eat an adult mouse during their first feeding, which is surprising to many novice snake keepers. Several sensory systems are operating in a feeding python. First, the food item must smell like something to eat. Second, the food item must move in the manner of a potential meal. And third, the food item must be warmer than its surroundings. Burmese pythons eat only warm-blooded prey and have sensory organs (pits) to detect the slight amount of heat generated by the body of a potential food item. A combination of these factors seems to be important in eliciting a feeding response in newborn pythons. Pinky mice normally do not move in a way that interests a baby python, and although I think they must smell like mice, they don’t generate and retain body heat very well.

Once a baby python has had its first few meals, it is possible for it to learn behaviors that allow it to recognize and eat prekilled food items, or even chicken parts or processed snake foods. It is sometimes recommended that snakes be fed only dead food items to avoid potential injury that could be inflicted by the struggling prey item. It is important to remember, though, that nearly every meal taken by a python in the history of the species has been living. Nature has prepared them well to deal with the possible associated problems. Frozen prekilled food makes things easier for us, though, and perhaps that should be the most important consideration.

As the snake grows, it will require more food, of course. For the first few meals, one mouse offered once or twice a week will be sufficient. Soon, though, the snake will require more than one mouse at each feeding. When the snake is regularly eating several mice per feeding, try offering it a small rat instead. By the time a Burmese is about 4 feet long, it should be able to take a medium rat; by 6 feet, a large rat would be appropriate. There is a young rabbit that’s equivalent in mass to a very large rat; substitute one of these as the snake grows, and increase the size of the rabbits as the snake increases in size. Chickens also represent a good food source; hatchling Burmese pythons can eat a day old chick, and at 9 or 10 feet they can eat an adult chicken.

Burmese pythons should always have access to fresh water. A heavy ceramic bowl like the PetRageous Ceramic Water Bowl, works well. It is not necessary for the snakes to be able to submerge themselves in the water dish.

Burmese pythons, because of their docile nature and undemanding requirements, are among the most suitable of the large snakes as captive animals.

Snakes have only a limited ability to reason. Believe me, that statement is quite generous. Keepers can in advertently condition a snake to think (I’m being generous again) that every time the door to its cage opens it will be fed. If the snake is handled infrequently and most of its interaction with its keeper occurs during feeding time, this conditioning is reinforced. With large snakes, especially, it is important that the snake learn to differentiate feeding time from other times, and you from its dinner. It will make little difference to you what thought processes have led to your current situation as your snake’s mouth latches onto your forearm. What this means is that it’s a very good idea to be aware of your snake’s location and orientation when feeding or when servicing its cage. If a snake is acting hungry when I open the cage, I gently tap it on the nose with a rolled up newspaper. This is usually enough to let it know it’s not feeding time. It’s also best not to house more than one snake per cage, and it’s essential not to feed more than one snake in a cage at the same time.

Bob Clark has been breeding Burmese pythons for 35 years, and has developed many of the Burmese python color and pattern morphs that are available today. Visit his website at BobClark.com.