Drymarchon corais couperi hasn't been spotted on Captiva in 25 years.

An Eastern Indigo snake has been spotted on Florida's Captiva Island for the first time in 25 years, according to a report on  NBC-2 Florida. The threatened species was found by landscapers. The director of the South Seas Island Resort where the snake was spotted called the Saniba Captiva Conservation Association who sent researcher Chris Lechowicz to investigate. The snake was then microchipped and it was released where it was found. Lechowicz told NBC-2 that the populations of Eastern Indigo snakes on Florida's Pine Island Sound and barrier islands are the last populations of indigo snakes that reside on islands. As the islands became more populated with people, the snake's populations went into decline, many of which are still killed crossing roads. Lechowicz and his team of researchers are working with the Orianne Society to study the populations of Eastern Indigo snakes in the Pine Island Sound area. 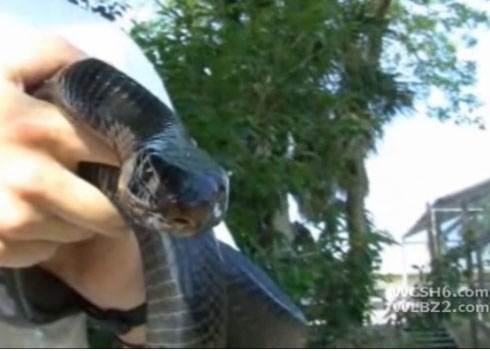 The Eastern Indigo snake is a large snake that can grow to more than 8 feet in length. A member of the family Colubridae, the Eastern Indigo snake can be found in Florida, eastern Georgia, southern Alabama and Mississippi. A threatened species, states where the snake is indigenous usually prohibit herpers from possessing them. They eat a variety of prey, ranging from frogs and toads to small birds and mammals, and other snakes, including venomous snakes.