A new study published in Physiological and Biochemical Zoology reveals how spitting cobras maximize their chances of hitting their target. Using high-speed photography and electromyography, scientists uncovered the mechanics of a cobra "spit." 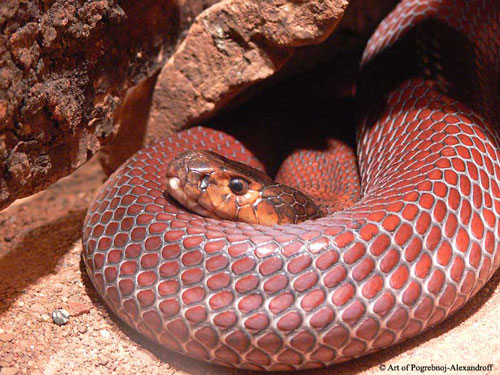 Cobras don't actually "spit" venom, said the study's lead author Bruce Young, director of the Anatomical Laboratory in the Department of Physical Therapy at the University of Massachusetts, Lowell. Muscle contractions squeeze the cobra's venom gland, forcing venom to stream out of the snake's fangs. The muscles can produce enough pressure to spray venom up to 6 feet.

To be effective, venom must make contact with an attacker's eyes, where it causes severe pain and sometimes blindness. Previous studies have found that cobras hit their targets with alarming frequency—nearly 100 percent accuracy from 60 centimeters.

This new study has shown that cobra venom does not hit a victim in one spot. Instead, the venom lands in complex geometric patterns. The patterns are no accident and are actively produced by the cobra.

Dr. Young and his team used high-speed photography and electromyography (EMG) to detect contractions of head and neck muscles. They found that cobras engage their head and neck muscles a split second before spitting. The muscle activity rotates the head, and jerks it from side to side and back again, producing complex venom patterns.

"The venom-delivery system functions to propel the venom forward while the head and neck muscles produce rapid oscillations of the head that … disperse the venom, presumably maximizing the chance that a portion of the spat venom will contact the eye," according to the article.

The paper appears in an issue of Physiological and Biochemical Zoology on the focused topic "Functional Consequences of Extreme Adaptations." PBZ is edited by Dr. James Hicks of the University of California, Irvine and published by the University of Chicago Press.