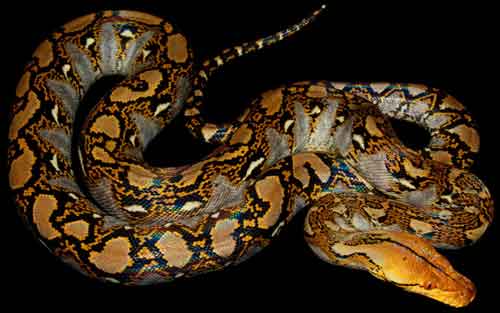 The reticulated python, also known as the “retic,” has long captivated its audience with its large, muscular build, gorgeous iridescence and the beautifully patterned skin for which it is named. Long thought of as an aggressive, ill-tempered snake, the retic now, because of captive breeding, has a reputation as an easily cared for, highly intelligent and rewarding captive.

The reticulated python has a wide range in Southeast Asia, with most snakes kept as pets originating from Indonesia and Malaysia. Different populations are highly variable and have been divided into separate subspecies, with more undoubtedly to come as further research is conducted.

Both imported and captive-bred reticulated pythons are commonly available year round. Fresh imports are very inexpensive, but they often carry heavy parasite loads and can have a difficult time adjusting to a captive environment. Because of large clutch sizes produced by captive breeders, there are plenty of healthy reticulated python hatchlings available, which tend to have better temperaments as well, so there is really no need to buy wild-caught animals. Because of the vast variety in adult sizes, temperaments and coloration, make sure you are buying from a reputable breeder who can provide detailed information on the individual animals you are considering. These can be typically found at reptile shows or online reptile shops. Please, always be responsible, and never release an animal intentionally, or take it into a situation where it may escape into the wild. 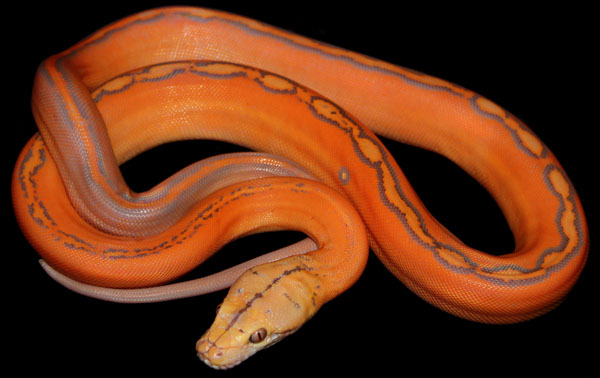 On average, reticulated pythons live 15 to 20 years, with some individual snakes reaching 25 or even 30 years of age.

The most important aspect of this reptile habitat is that it must safely contain the snake. Tight-fitting racks or strong cages with locks are a must. Baby reticulated pythons can be kept in shoebox-sized cages or 10-gallon reptile terrariums. Adult reticulated pythons can be housed in 2-foot-tall by 3-foot-wide by 6- to 8-foot-long cages. Occasional larger snakes may require a 3-foot-tall by 4-foot-wide by 10-foot-long enclosure. Custom-built cages should be constructed of strong, waterproof materials for ease of cleaning. Using quality reptile cleaning supplies is important for your pet's health! Reptile hides (like the Zoo Med Habba Hut) are a fundamental snake habitat product and asset for all reptiles which are particularly effective for juvenile reticulated pythons. We recommend something tight fitting but with an entrance large enough for the animal to enter and exit easily. 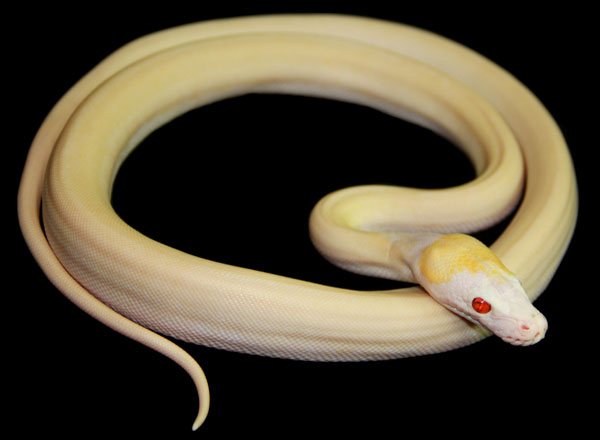 We at Prehistoric Pets have used printed newspaper and plain newsprint with great success. Other options include aspen, cypress mulch (Zoo Med Forest Floor Natural Cypress Bedding) or pre-cut corrugated cardboard. Check daily for defecation or urination and replace substrate accordingly, you can use cleaning products like the Zoo Med Wipe out Terrarium Cage Cleaner and the Fluker's Eco Clean Natural Waste Remover.

A variety of options exist for snake heating reticulated pythons, such as heat pads, like the Zilla Heat Pad, spot lamps like the Fluker's Sun Spot Bulb (always use a cage guard to prevent injury), heat tape and heat panels. A high-quality thermostat (or a simpler one for hatchlings like the Zilla Terrarium Heat & Habitat Controller) is always worth the money to ensure that you are providing the proper options for healthy thermoregulation. Temperatures should range from 76 degrees Fahrenheit on the cool side to 92 degrees as a hotspot. 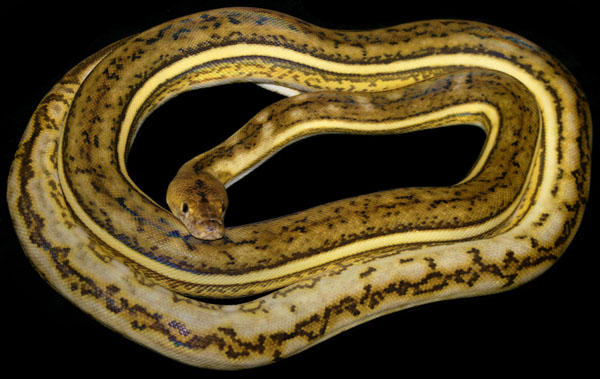 A good rule of thumb is to feed one prey item, of comparable girth to the thickest part of the snake’s body, every seven to 10 days. Reticulated pythons fed more often will grow faster and can reach greater lengths, but overfeeding snakes can cause health problems, as with any animal.

A large water dish should be available at all times, constructed of dishwasher-safe or easily sanitized materials, and it should be heavy enough to not be easily tipped over. The water dish does not need to be large enough for your snake to soak in, though reticulated pythons can be soaked for a few hours in a separate container or a bathtub once they begin shedding to ease the removal of shed skin.

Baby reticulated pythons can be nervous about having giant predatory animals (such as humans) around them all the time and may hiss or even strike, but with gentle daily handling, they become quite confident.

Acclimated reticulated pythons have a strong feeding response, so expect that whenever you open the cage they will be interested in food. Everyone handles this differently, but the basic idea is the same: Before you reach toward your snake with your hand, take the time to show the snake that it’s not being fed. At Prehistoric Pets, we use a paper towel roll, which will not hurt the snake’s teeth if it bites it, to pet the snake on top of its head until it moves away and is no longer looking for a target to strike at and eat. Once this happens, we simply pick the snake up by hand. Once they’re out of their cages, our reticulated pythons are usually very receptive to handling. When dealing with any large snake, it is wise to have a second experienced handler present, and keep the animal’s head pointed away from you and others at all times, especially if you’re handling an easily spooked animal.

Several locality-specific Dwarf retics have popped up on the breeding scene, offering an exciting opportunity to breed the designer morphs in a smaller size for easier keeping by most enthusiasts. The resulting Dwarf morphs are incredible. There are different varieties of Dwarf reticulated pythons that attain differing adult sizes, ranging from the smallest (called Super Dwarfs) that reach sizes of only 6 to 8 feet, for example, while others max out at 10 to 12 feet.

If you’re considering purchasing a Dwarf retic, it’s important to know what kind of Dwarf it is and what percentage of Dwarf blood it has in order to estimate its eventual adult size. Ethics within the reptile trade dictate that a reticulated python must have at least 50-percent Dwarf blood to be labeled a Dwarf. Generally, the higher percentage Dwarf blood, the more expensive the snake.

There are a number of new and established reticulated python color and pattern mutations. Some of these include Sunfire, Titanium, Clown and Albino, which when combined create “designer reticulated pythons,” some photos of which accompany this care sheet. The designer morphs do not exist in the wild, but are some of the most strikingly beautiful animals in the world. We at Prehistoric Pets work with a colony of various morphs and offer a great selection, from the most common to some of the most sought after reticulated python mutations and combinations available.

This natural variety, along with numerous genetic morphs, allow for selective breeding and domestication to occur rapidly, and the last 20 years has seen the Reticulated python become available in over 200 different varieties! Before you buy your new pet do your homework, buy captive-bred snakes, and have fun with your new retic! Be sure to check out the ReptileChannel Quick Care Video featuring Jay Brewer and REPTILES/ReptileChannel Editor Russ Case talking about reticulated pythons

Jay Brewer is the source for reticulated python care and information. Visit his website at PrehistoricPets.com.