Scared Of Snakes? There May Be A Gene For That

A study of an indigenous tribe in the Philippines and the tribe’s encounters with the reticulated python (Python reticulatus) claims that genetics play a role in the fear of snakes. The study, “Hunter–gatherers and other primates as prey, predators, and competitors of snakes,” and coauthored by Anthropologist Thomas N. Headland, who has lived off and on among the tribe since 1962, takes a detailed look at an Agta Negrito tribe on the main island of Luzon in the Philippines, documenting reticulated python attacks on members of the tribe. 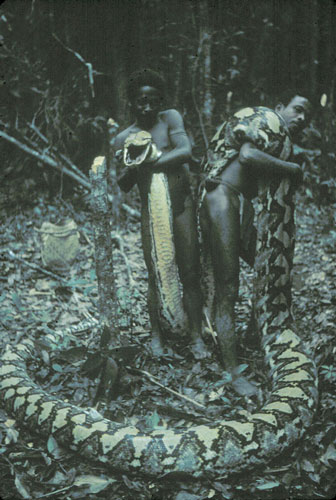 Headland, adjunct professor of anthropology at Southern Methodist University, Dallas, Texas who has a Ph.D. in anthropology from the University of Hawaii, interviewed 58 men and 62 women of the tribe regarding their encounters with the reticulated python over the years. His study determined that 15 of the men and one woman survived a python attack, while six fatal attacks were documented between 1934 and 1973, which averages to about one attack every two to three years.

The Agta Negrito are a small people; an adult male averages less than 100 pounds in weight. Compare that with the wild pigs that the pythons eat in the jungles of the Philippines that weigh up to 130 pounds and a case could be made that the Agta Negrito is on the python’s dinner menu. In fact, both the Agta Negrito and the python compete for the same food in the jungle; wild pigs, monkeys, and deer, and the tribespeople routinely hunt the python and eat them, but don’t eat any other snakes found in the rainforest, according to the paper.

“The universal human fear of snakes, especially giant snakes, but also small snakes, is in my opinion mainly nature, not nurture; genetic,” Headland told ReptileChannel. “All humans seem to have this, men as well as women, and certainly the Agta, both men and women and children, have that fear.” Headland though believes the neuroscientists should figure out whether humans naturally fear snakes.
“I wouldn’t argue this too strongly,” he said. “Let the neuroscience experts argue that out. I’m an ecological anthropologist, not a psychologist. Harry (Harry W. Greene, co-author of the paper) and I are glad to make our contribution to science by collecting our data on Agta/python symbiosis, and tying it into our library research showing records of snakes preying on 26 known species of non-human primates, and suggesting from that just how far back into prehistory, over a million years, this symbiosis between snakes and hominins goes.”

Because of the exploitation of the island nation’s rain and hardwood forests, this data is not easily obtainable anymore, as the Agta Negrito is exposed to modern culture,  anthropologist Lynne Isbell of the University of California, Davis told Wired Science. Isbell, who was not part of the study, called the relationship between snakes and primates an evolutionary arms race, citing evidence that early human eyesight likely improved in order to detect snakes in their environment, and the increasing intellect of early humans could have caused snakes to develop other forms of camouflage.

The tribe’s interaction with the python probably indicates a complex relationship between early humans and snakes, the paper states, a relationship that may explain a fear of snakes by humans today.
“Granting that mid-20th century Agta were in no general sense primitive, our data quantify a high potential for snake predation on people similar in size and hunter–gatherer lifestyle to prehistoric hominins,” the authors state in the paper.