A rare relationship between rancher and Gambelia sila results in a well fed cow and a swift lizard.

Invasive grasses have wreaked havoc on the natural habitat of the blunt-nosed leopard lizard (Gambelia sila) in Northern California. The federally endangered lizard gets caught up in the tall grasses and become extremely vulnerable to predators. The solution? Federal officials have issued cattle grazing permits to ranchers in Tulare County's Pixley National Wildlife Refuge. The cows eat the invasive grasses and the lizard can again move about more swiftly. It is a relationship that seems to benefit both reptile and mammal. 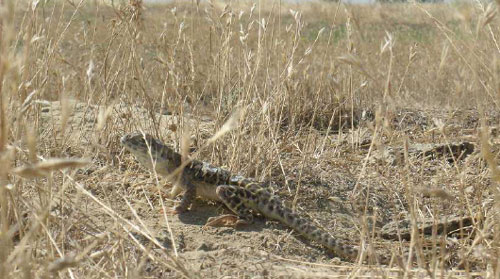 This managed grazing, whereby the cows are given access to specific areas to graze, is being used throughout the valley in an effort to help endangered animals such as the blunt-nosed leopard lizard, the Tipton kangaroo rat and the San Joaquin kit fox, as well as certain plants that have been choked off by the grasses.

Bryan Cypher, a Bakersfield-based ecologist who works for the Endangered Species Recovery Program at California State University, Stanislaus said in an article that appeared in the Fresno Bee that certain plants and animals may still be around due to cattle grazing. He said that grazing is the best option when dealing with non-native grasses. Other biologists and environmentalists disagree, saying that cattle grazing damages streams, contributes to erosion, and destroys meadows and wetlands.

According to the article, federal officials lease about 500 acres to the cattle ranchers from November to April every year, enabling the cows to feed on grasses that are not native to the region. Alternatives to rid the valley of the grasses include mowing the grasses and using pesticides to kill them off, and burning the grasses, which would kill every creature in fire's path and create too much smoke in the already polluted valley. Surveys conducted by the Endangered Species Recovery Program seem to agree on the benefits of cattle grazing.

The latest survey of the blunt-nosed leopard lizard, completed in September 2011 deemed the lizard population in the valley as robust when compared to other areas in which the herp can be found. Some recommendations of that survey, which was conducted by California State University, Stanislaus, include continuation of cattle grazing on the Pixley National Wildlife Refuge and a call to increase the intensity of the grazing during years with higher than normal rainfalls.