Rattlesnakes Under Threat Due To Climate Change

The ranges of rattlesnake species are likely to shift dramatically as a result of climate change between now and 2100. This is because the climate will change over 100 times faster than the rate at which species can adapt, according to a newly published study by Indiana University (IU) scientists. 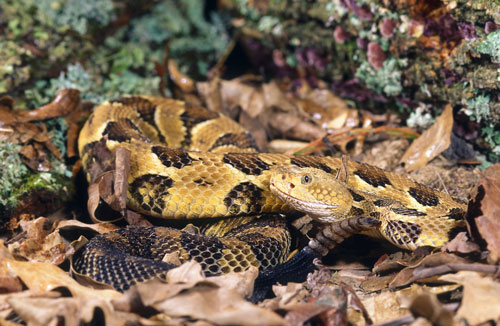 The study finds that, with a temperature increase of 1.1 degree Celsius over the next 90 years, the timber rattlesnake range would expand slightly into New York, New England and Texas.

This research, which focuses on North American rattlesnakes, finds that the rate of future change in suitable habitat will be two to three orders of magnitude greater than the average change that has taken place over the past 300 millennia – a period that included three major glacial cycles and significant variations in both climate and temperature.

"We predict that, over the next 90 years, at best these species' ranges will change more than 100 times faster than they have during the past 320,000 years," confirms Michelle Lawing, lead author of the paper and a doctoral candidate in geological sciences and biology at IU Bloomington. "This rate of change is unlike anything these species will have experienced at any stage in the past."

The researchers made use of the fact that species have been responding to climate change throughout their history, and their past responses can inform what to expect in the future. They synthesized information from climate cycle models, indicators of climate from the geological record, evolution of rattlesnake species and other data to develop what they describe as 'paleophylogeographic models' covering the distribution of these reptiles. The scientists have now mapped the expansion and contraction of the ranges of 11 North American rattlesnakes in the genus Crotalus, at 4,000 year intervals.

Projecting the models into the future, the researchers calculate the expected changes in range at the lower and upper extremes of warming predicted by the Intergovernmental Panel on Climate Change — between 1.1 degree and 6.4 degrees Celsius. They calculate that rattlesnake ranges have moved an average of only 2.3 meters a year over the past 320,000 years, and that their tolerances to climate have evolved about 100 to 1000 times slower, indicating that range shifts are the only way that rattlesnakes have coped with climate change in the recent past.

Contractions could be severe

Based on projected climate change data over the next 90 years, the ranges of these snakes would be displaced by a remarkable 430 meters to 2,400 meters annually. Increasing temperature does not necessarily mean expanded suitable habitats for rattlesnakes. For example, the timber rattlesnake (C. horridus), is now found throughout the eastern United States. The study finds that, with a temperature increase of 1.1 degree Celsius over the next 90 years, its range would expand slightly into New York, New England and Texas.

But with an increase of 6.4 degrees, its range would shrink to a small area on the Tennessee-North Carolina border. The eastern diamondback rattlesnake (C. adamanteus), would be displaced entirely from its current range in the southeastern U.S. if faced with an equivalent temperature rise of this magnitude.

The findings suggest rattlesnakes would not be able to move fast enough to keep up with the change in suitable habitat. The authors suggest the creation of habitat corridors and managed relocation may be needed to preserve some species.

Rattlesnakes are good indicators of climate change because they are ectotherms, which depend on the environment to regulate their body temperatures. But the authors of the study note that many organisms will be affected by climate change, and suggest their model could provide a means to assess what may happen with other species too.

Reference: The article is available online from PLoS One Journal.

Read an article on how so-called rattlesnake roundups are impacting rattlesnake populations here.