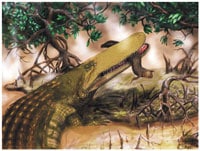 Aegisuchus witmeri estimated at 25 to 35 feet in length had a thick skin on its forehead.

Researchers have discovered partial fossils of a giant crocodile (Aegisuchus witmeri ) that roamed the earth approximately 95 million years ago with a shield of thick skin on its forehead and a skull around five feet long. Dr. Casey M. Holliday, the researcher who led the study of the aptly named "Shieldcroc," estimates the body of the reptile to have been around 25 to 35 feet, according to an article describing the partial specimen in The New York Times.

Holliday, a paleontologist at the University of Missouri said that Shieldcroc is the oldest ancestor of the African crocodile found to date and had different foraging habits than modern day crocodiles. "We're finding that not only were crocodiles living in the water, but they were living on land and not only chasing animals, but also eating plants," Holliday told The New York Times. "Crocodiles were operating a whole suite of niches that they don't know today."

"Shieldcroc was not herbivorous, but likely ate fish and small vertebrates, Holliday told ReptileChannel. "This is based on evidence from our fossil as well as those of some related croc taxa. But yes, there are a number of crocodilians from the Cretaceous of South America, Africa, and Europe that were doing some very different things with their skulls and diets. This includes short faces, iguana-like teeth, heterodont teeth (meaning different teeth have different shapes and functions-like ours), and the wear facets on the teeth indicate that some of these crocs may have been chewing their food in a far more complicated fashion than today's crocs do."

Shieldcroc was found in Morocco and then sold to the Royal Ontario Museum in Toronto. The museum will display the fossil this year.