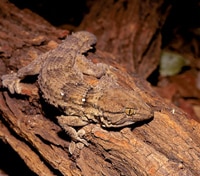 Check out these geckos native to America.

If you enjoy seeing exotic herpetofauna but are not inclined to travel to distant countries, come to Florida. Here in South Florida, without expending much effort, you'll probably be able to find every size class of green iguana, or maybe you'll spot spiny-tailed iguanas, various anole species, curly-tailed lizards, brown basilisks or Burmese pythons.

Then, of course, there are the exotic geckos. Feral tokay geckos (Gekko gecko), probably released on the erroneous assumption that they would eradicate the omnipresent roach population, are abundant in several areas of Florida (this gecko also occurs on the island of Oahu, Hawaii).

One night, my friend Walt Meshaka and I looked for the 10- to 13-inch geckos at a site near Miami International Airport and were rewarded by seeing dozens. We found communal egg depositories in tree hollows and behind shelter on buildings. The eggs (eggshells, actually – they had all hatched) numbered in the hundreds at some sites and in the dozens at others. Barring climatic intervention, the tokay gecko is now in Florida to stay.

Nor is the tokay the only gecko to be found in Florida. At least 17 of its relatives (some very distant) now also occur in the state. The tokay is the largest gecko found here, being approached in size only by the Madagascar giant day gecko, a relative newcomer. These two, and all other geckos of Florida and Hawaii, have lidless eyes and are members of the family Gekkonidae.

One of the best ways to see geckos in the United States is to wander about on hot spring or early summer nights in warehouse complexes and residential neighborhoods from St. Petersburg and Tampa to Key West, playing the beam of a powerful flashlight on the walls. You could see a dozen or more species. This is not possible elsewhere in the United States, even in the Hawaiian Islands, the Pacific "epicenter" of alien gecko introductions.

The single exception to this alien gecko horde is the little brown Florida reef gecko (Sphaerodactylus n. notatus). This 2-inch-long dweller of leaf litter and tidal wrack, considered a native by most researchers, is most common on the southern tip of the peninsula and the Keys, but has been found sporadically as far north as West Palm Beach on the Caribbean coast of the state. Males are brown and patterned with a liberal peppering of darker spots; females have a striped head and a pair of light ocelli on the nape.

The reef gecko has two tiny relatives, both from the West Indies, that occur only on the Lower Keys. These are the ocellated gecko (S. a. argus) and the ashy gecko (S. e. elegans). The former is even darker than the reef gecko, but has an orangish tail and often a series of tiny, paired, light spots on the nape. The ocellated gecko seems to occur rarely, but this may be because it is easily mistaken for the other two species. The ashy gecko is a bit larger as an adult than the other two. Adults are a nondescript mottled brown on brown, but babies are green with black bands and a bright orange tail. These three Floridian geckos, along with the yellowhead gecko (Gonatodes albogularis fuscus), are contained in the subfamily Sphaerodactylinae (the remainder are in the subfamily Gekkoninae).

The various species lay a single hard-shelled egg per clutch, but have several clutches a year. The hatchlings are tiny, with reef and ocellated geckos resembling miniatures of the adults. Yellowhead gecko hatchings are similar in color to the mottled brown female. The 3-inch-long yellowhead gecko was once known from a colony in Coconut Grove (now apparently extirpated) and on Key West. No examples from Key West have been seen in a decade or so. Yellowhead geckos are sexually dimorphic. Females are a mottled brown with a light collar, and males are greenish with a yellow-ochre head, which is brightest during the breeding season. None of the sphaerodactylines are known to vocalize.

About 50 years ago, I made the acquaintance of the first introduced gecko to colonize most of Florida. Back then it was called the Turkish or warty gecko. Today it is known as the Mediterranean gecko (Hemidactylus t. turcicus). This 41Ú2-inch-long gecko with big splayed toes and warty skin may now be seen in protected areas as far north as Kentucky, through the Sun Belt and all the way to the Pacific Coast in California and Baja California. It is native to the Mediterranean region. Of the four species in this genus now in Florida, it has the roughest skin and is apt to be mistaken only for the Amerafrican house gecko (H. mabouia), a slightly larger species with fewer dorsal tubercles that has taken Florida by storm.

Only 10 years ago, H. mabouia was thought to be restricted to the Keys; today it is found to points north of Lake Okeechobee. The other two species of this genus, the Indo-Pacific gecko and the tropical house gecko (H. garnotii and H. frenatus, respectively) are smooth skinned. The Indo-Pacific gecko has a pretty orange to yellow venter, and the tropical house gecko is completely nondescript. The Indo-Pacific gecko, a parthenogenic species, is now found along both Florida coasts as far north as Jacksonville and the western Panhandle, and has been recently found in Georgia. 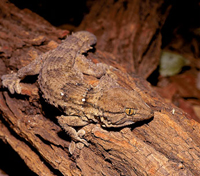 The white-spotted gecko (Tarentola annularis) is a robust lizard that can reach lengths of 7 inches.

Although I knew that feral tropical house geckos were occasionally found on some warehouse complexes in Lee, Charlotte, Miami-Dade, Broward and Collier counties in Florida (it occurs also in Hawaii), both Walt and I were surprised to find it in reasonable numbers on a health department building in Key West (it was previously unknown in Monroe County). It has since spread to nearby areas.

On a few warehouses in Pinellas County, Florida, a house gecko lookalike has been present for decades, but it has not increased its range noticeably. This species is the Asiatic flat-tailed house gecko (Cosymbotus platyurus), another of the rather flattened grayish geckos with well-developed toe pads and laterally fringed tails. Its presence, like that of many other geckos, is attributed to the pet trade. Geckos are escape artists. Most of the species now present in Florida are relatively inexpensive, hence pets are not maintained under strict security.

Within the last couple years, Malaysian flying geckos (Ptychozoon lionatum) were found on and near the warehouse of a Broward County reptile dealer. This 5- or 6-inch-long, grayish gecko has broad lateral flanges of skin from chin to hind limbs and an interesting scalloped tail. During long sloping glides from tree to tree the flanges spread. Despite lacking bright colors, flying geckos are unique enough in appearance to have become a hobbyist favorite.

Three larger geckos, two referred to as wall geckos and the third as Bibron's gecko, are also now established in south and central Florida.

Bibron's gecko (Pachydactylus bibroni) became established in the 1970s in a small area of Manatee County, Florida, after specimens were set loose in a small greenhouse for pest control. The geckos quickly spread to nearby houses, but apparently have not colonized more than an additional block or two in the last 30 years.

Day Geckos in the U.S.

Arguably the most beautiful geckos now found in the United States, the day geckos are unique not only for their Kelly-green coloration but because they are diurnal. The three Florida species are of Madagascar origin. At 10 inches in length, the giant day gecko (Phelsuma madagascariensis grandis) is the largest of this emerald quartet. It now occurs in Lee, Collier, Broward, Miami-Dade and Monroe counties, and it is often found near stands of bananas. The brilliant green dorsum of this gecko is variably adorned with bright orange. 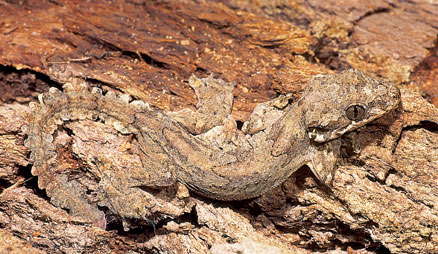 The orange-spotted day gecko (P. guimbeaui) is present on Oahu. Until it became established there, this 7-inch-long gecko occurred only on Mauritius. This is a beautiful gecko, green sided, turquoise backed and orange-spotted.

A small (to 41" inches), agile, rough-scaled gecko from North Africa is now well established on Galveston Island, Texas. This is the rough-tailed gecko (Cyrtopodion scabrum), long legged, slender toed, quietly colored and very fast. It probably arrived at the Galveston docks in produce or other trade and quickly acclimated to the area.

Geckos of the West and Southwest United States

Southern California is home to the native peninsular leaf-toed gecko (Phyllodactylus nocticolus), a 3"-inch-long inhabitant of rocky terrain, escarpments and road-cuts. This gecko has a splay-legged gait and long toes with broadly expanded tips. It is common in some areas, but is protected by state law.

The remaining four U.S. gecko species (one with four subspecies) are terrestrial, eyelidded species of the family Eublepharidae. All are natives, lack toe pads and are arid-land species. The two largest species, the Big Bend gecko (Coleonyx reticulatus) and Switak's banded gecko (C. switaki), both of which may exceed a stocky 6 inches in length, are associated with boulder fields, rocky road cuts and escarpments in western Texas and Southern California respectively. Both also occur in Mexico. Adults have many large tubercular scales interspersed among small, smooth dorsal scales, and both typically have reticulations or ocelli rather than bands crossing their backs. Both are considered rare and are protected species.

At a mere 41" inches in length, the Texas banded gecko (C. brevis) is the smallest of the North American eublepharines. It is found from southeastern New Mexico to southern Texas and well into Mexico. Distribution separates this species from the various subspecies of the somewhat larger western banded gecko. Both the Texas and western banded geckos are small, slender and common. They may be found in rocky terrain, but also inhabit sandy desert lands.

Geckos are great favorites of herpetoculturists, but only about half of the U.S. species have found favor with hobbyists. Among these are the various day geckos, tokays, flying geckos, wall geckos and the two smaller species of banded geckos. Hobbyists often use house geckos as prey items for lampropeltine snakes; the tiny sphaerodactyline geckos are overlooked entirely; and the two largest species of banded geckos are protected.

Caring for geckos is easy. They require a large enough enclosure, adequate hydration, suitable warmth and a proper diet. Male geckos are very territorial, and unless the cage is very large only one male per cage is best. Although females of some species may be hierarchical, they are usually less aggressive. To prevent cannibalism, geckos within the same enclosure should be about the same size. Tailor cage size and orientation to the gecko species you're keeping. Geckos tend to be more agonistic when crunched together in a small cage. When space and budget allow, larger cages should be considered. Although a single tokay could be kept in a 10-gallon terrarium, a cage twice that size would be better and would allow you to keep a second tokay if you chose. Conversely, a 10-gallon tank is perfectly adequate for three or four house geckos, a pair of wall geckos or a colony of reef geckos.

Nocturnal geckos can provide interesting interludes for folks who work all day but are usually home after dark. At night these lizards become active, ghosting up and down the sides of their cage in search of food and drinking droplets of water misted onto the plants and other cage furniture. Day geckos, on the other hand, are aptly named. They prowl their cage during the daylight hours, catching and eating insects and eating a fruit-vitamin mixture. Feeder insects should be properly sized for the gecko species being fed, and both gut-loaded and dusted with a good vitamin D3/calcium powder.