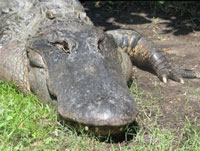 800-pound alligator was once ordered destroyed in 2000

Those who wish to see one of the largest American alligators (Alligator mississippiensis) outside of Florida can do so at the Adventure Aquarium in Camden, NJ. Mighty Mike, as the 14-foot alligator is named, is currently on loan from a private collection to the aquarium through February 2012.

"An animal as rare as Mighty Mike is simply a must-see," Marc Kind, the aquarium's director of husbandry said in a prepared statement. "Like sharks, alligators are often vilified and feared.  I'm thrilled that our husbandry team has the opportunity to work with an alligator as large and rare as Mighty Mike, and we look forward to educating guests about this amazing, and often misunderstood, animal."

Back in 2000, Mighty Mike began living near a boat dock on Lake Talquin in Florida, a popular fishing and boating reservoir. The 800-pound alligator was ordered destroyed due to its size but the trapper who captured him was able to get a local reptile expert to house him. Now, people are able to see this animal and learn the conservation story behind him. For more information on Mighty Mike, as well as information on the aquarium, visit www.adventureaquarium.com.

The American Alligator can be found in the wild in the southeastern portion of the United States. It inhabits freshwater ponds, marshes and rivers, and can grow to 19 feet.