UC Berkeley researchers study how arboreal lizards right themselves as they fall.

Animals that spend time off the ground possess what is described as a righting reflex. This enables them to swivel their bodies round instinctively, so they can land on their feet. Their limbs can then act effectively as shock absorbers, taking the impact of the fall and thereby usually preventing serious injury. 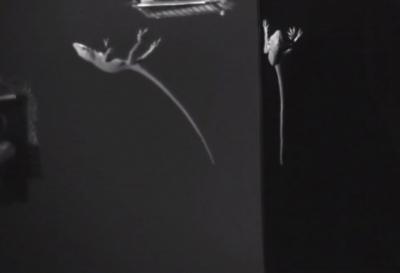 To turn right-side up when falling, lizards like this green anolis swing their large tails one way to rotate their body the other

This characteristic is best documented in cats, but it is also been studied recently in lizards, by a team led by Ardian Jusufi and colleagues from the University of California, Berkeley. These reptiles adopt a different method of turning themselves round as they fall, by using their tails to orient themselves.

"It is not immediately obvious which mechanism an animal will use to accomplish aerial righting and recover from falling in an upside-down posture. Depending on body size, morphology and mass distribution there are multiple strategies for animals to execute this behavior," explains Ardian Jusufi.

The Impact of Tail Length

The researchers chose two separate species, in the guise of the green anole and the flat-tailed house gecko. They used high-speed videography to be able to track the movements of the lizards as they fell. This revealed that as the lizards swung their tails in one direction, so their bodies moved in the opposite direction.

The study also revealed a difference in the way in which the lizards reacted, relating to their overall anatomy. While their actual body size is similar, the anole has a much longer tail – approximately twice the length of that of the gecko. This meant that it needed to adjust its movement to a significantly lesser extent, in order to swivel its body round to the right position.

According to Ardian Jusufi: "A comparative approach provides useful insights in the study of aerial righting responses and could be beneficial to the design of robots that navigate complex environments."

As the next stage in their research,  the scientists devised a mathematical model, and used this in turn to construct a simple robot. Called RightingBot, this consists of two parts – a body attached to a tail. It too is able to right itself in mid-air, confirming just how simple yet crucial this method is, to the survival of arboreal lizards when they fall from a height.