A treefrog discovered in a museum in 2008 by Dr. Luis A. Coloma has been named the Prince Charles stream treefrog in honor of the prince's advocacy for protecting the world's rainforests. The frog, Hyloscirtus princecharlesi, was rediscovered in Ecuador's Cotacachi-Cayapas National Park by Dr.Coloma who led an expedition there to determine if the frog was indeed still in the wild. 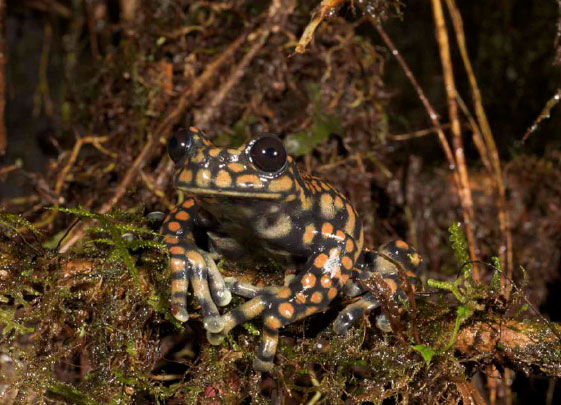 According to the Chester Zoo, the prince received a glass model of the frog during an event last week honoring him for his advocacy on behalf of rainforests through his Prince's Rainforest Project, one of The Prince's Charities. Known as the "Frog Prince," the future king of England's Rainforests SOS Campaign features a frog as a rainforest ambassador.

The Prince Charles stream treefrog is native to the montane cloud forests of Cordillera de Toisán mountain range in northwest Ecuador. It is nocturnal and lives along streamside vegetation. It is black in color with orange spots uniformly distributed on its body. It is considered endangered and Dr. Coloma expects a population reduction of 50 percent in the next 10 years due in part to habitat destruction via threats such as logging, burning, unregulated land use for agriculture, cattle farming, the use of pesticides, and invasive trout in the streams in which Hyloscirtus princecharlesi inhabits.