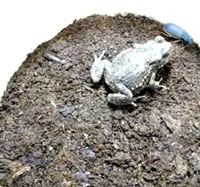 While it's usually the frog that catches the unsuspecting bug for a tasty snack, another potential outcome to this story has now emerged. In an unprecedented reversal of the usual role of prey and predator, a certain group of ground beetle larvae can deliberately lure would-be amphibian predators within reach and then consume them with a success rate of almost 100%. In a report just published, researchers describe for the first time how these larvae are able to pull off this feat.

Caught unaware
According to the scientists, larvae of the genus Epomis combine a sit-and-wait strategy with unique movements of their antennae and mouthparts, in order to attract the attention of an hungry amphibian, such as a frog or toad. As the amphibian is attracted closer, thinking it has spotted potential prey, so the beetle larva increases the intensity of these enticing motions, reinforcing this impression.

Then, when the amphibian attacks, the larva almost always manages to avoid the predator's tongue. Instead, it uses its unique double-hooked mouthparts to attach itself to the amphibian's body and begin feeding in a particularly gory way. This can include both sucking out the amphibian's bodily fluids and also chewing its body tissues. The combined effect of this assault is usually fatal for its much larger adversary.

How this may have occurred
"Interestingly, both adult beetles and larvae of species related to Epomis are commonly preyed upon by amphibians," says the senior author Gil Wizen. "It seems that instead of serving as food items for amphibians, Epomis larvae have evolved to specifically take advantage of amphibians as a food source. The amphibians themselves are unaware of this danger, and this makes them highly vulnerable."

These findings extend the perspective of co-evolution in the arms race between predator and prey and suggest that counterattack defense behavior has evolved into predator-prey role reversal. However, the mechanism of the larva's swift counterattack against the speedy amphibian is still unknown.

Research in this area is just at a preliminary stage, with much still to be discovered, although it has been known previously from studies in Israel that adult Epomis beetles often occur alongside amphibians and will also prey on them.