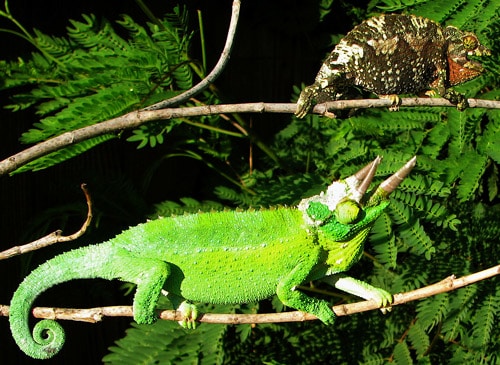 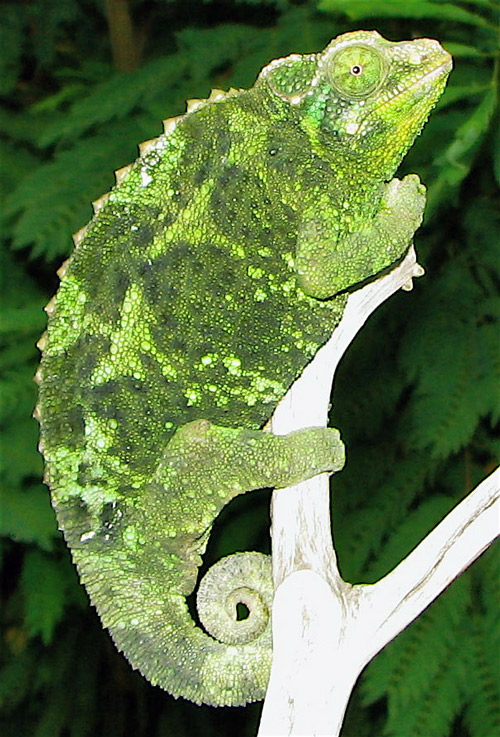 On average, you can expect a healthy male Jackson's chameleon to live eight to 10 years. The females, however, will only live approximately four to five years. Once reproductive, the female's mission is to give birth. This wears them out after three or four broods per year. If you are looking for a single pet, I recommend getting a male because of the longer life span.

As with all chameleon species, I recommend your Jackson's chameleons be housed separately in screen cages that are a minimum of 3 foot tall by 2 foot square per chameleon. Housing reptiles separately is one way to reduce the stress of captivity.

I recommend using a Ficus benjamina tree or any nontoxic plants that are suitable, along with sticks of various sizes. I prefer paper towels as a ground cover or nothing at all. Remove feces, dead insects or leaves as needed. Once a month, remove the chameleon and plant to give the enclosure a thorough cleaning using a reptile-safe disinfectant. 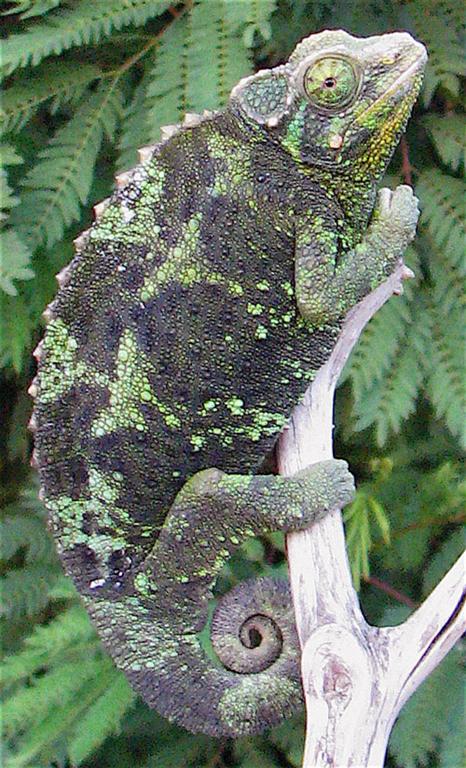 Recommended ambient daytime temperatures of 80 degrees Fahrenheit, with nighttime temperatures of 60 degrees, is an acceptable range for most Jackson's chameleons in captivity. On top of the indoor enclosure I place a UVB full spectrum tube as well as a spot lamp for heat. Place branches for basking 3 to 4 inches away from the screen on the inside, and the light housing 3 to 4 inches from the screen on the outside. Doing this will keep the chameleons from getting too close to any lighting, and prevent a potential burn. Remember, no light bulb will provide the same long-term benefits as the rays of the sun.

Exposure to natural sunlight is very important for livebearing species of chameleons. Even a few hours of sunlight on weekends will charge their batteries. When chameleons are outside, be careful to not leave them unattended. If the chameleon turns very light in color, or begins panting or gasping, move it to the shade and hydrate. This is a sign of heat stress.

Jackson's chameleons are insectivores. The best items to use are live gut-loaded crickets, wax worms, butter worms, cockroaches, house flies or small snails. The key is to provide a varied diet of high-quality, nutrition-loaded insects.

Jackson's chameleons are especially sensitive to excess amounts of synthetic Vitamin A, making them prone to gout and edema. I recommend supplementation using a combination of my Sticky Tongue Farms Vit-All to gut load prey items with vitamins and amino acids, and my Sticky Tongue Farms Miner-All to dust prey with calcium and trace elements.

Offer no more than five to seven insects to your chameleons per feeding. Each insect should not be larger than the space between the chameleon's eyes. I prefer free-range feeding, which allows chameleons to hunt and get exercise. However, a plastic feeding dish placed under a branch for easy access is also fine. 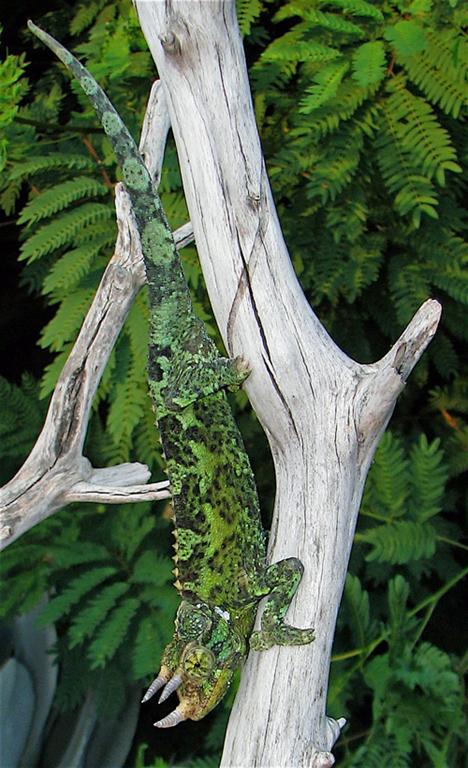 Rainfall averages 30 to 60 inches per year in the native range of Jackson's chameleons. The humidity is 50 to 80 percent year-round. A fully hydrated chameleon will possess full eyes, skin and casque (top of the head). Always offer water before feeding to ensure that the tongue is lubricated and functioning properly. When the chameleon is in a rainstorm, it has an opportunity to clean its eyes and fully hydrate. Puffing out their bulbous eyes and rubbing them on a branch is completely normal, even if the chameleon is not drinking the rainwater. The humidity will hydrate their skin and delicate lungs.

If the chameleon is drinking rapidly, continue to offer water until they slow down or stop drinking or washing their eyes. Gently mist the chameleon's entire tree and body with water a minimum of twice daily. Using an ultrasonic humidifier to produce a cool mist if the humidity drops lower than 50 percent, is also recommended. Placing the chameleons in a rainstorm for full hydration once a week is beneficial as well, even if a humidifier is supplied. To simulate rain, put the chameleon in the shower on a plant or rack, under a light rain or mist for a minimum ½ hour weekly. In higher temperatures, chameleons require more hydration. Be observant and adjust the watering times accordingly.

At approximately 9 months to 1 year old, a healthy Jackson's chameleon will be ready to breed. Place the female into the male's enclosure, and allow the male to breed for up to three days. If the male seems disinterested, offer a rainstorm, or show him another male. If none are available, show him his mirror image. Often males that are housed next to, or can see, the females become too familiar with them and are not interested in breeding with them. Another male, real or imaginary, will entice the lazy male to breed with the female.

All Jackson's chameleons are ovoviviparous. This means that neonates are incubated in a soft shell membrane inside the mother. Gestation is typically seven to nine months for the first brood. After which time, if proper breeding has occurred, another brood will be born every three months thereafter, due to the chameleon's unique ability to store sperm. Reintroduction of a healthy female to the male two weeks after giving birth is recommended to keep sperm counts high.

Linda Davison is the source for Jackson's Chameleon information and breeding. Please visit her site at StickyTongueFarms.com.