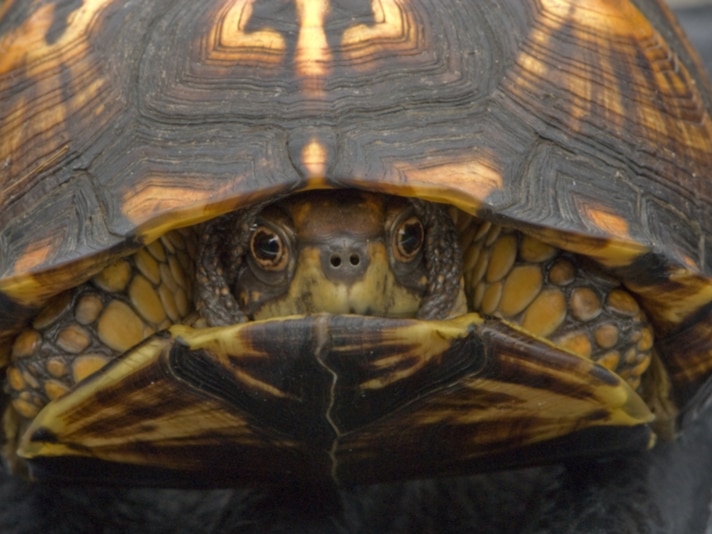 Ornate box turtles are a pet store favorite in the United States and are some of the most popular box turtle species offered for sale in the pet industry today. Ornate box turtles come from a variety of sources, including wild caught, farm raised, and some captive bred. Additionally, given the large number of ornate box turtles sold annually, they are a common resident in reptile rescues. If you obtain a wild-caught or farm-raised ornate box turtle, be sure to completely inspect the turtle. Wild-caught turtles typically harbor internal parasites and should be treated by your veterinarian.

Box turtles, in general, have been recorded to live as long as 100 years, with most living between 40 and 60 years. The records for ornate box turtle longevity indicate animals living as long as 32 to 37 years. However, the longevity for box turtles is largely dependent on their diet, habitat, the cleanliness of their enclosure and stress. Optimizing the conditions for your ornate box turtle will lead to a long and healthy life.

Hatchling ornate box turtles can be kept in plastic shoebox-sized enclosures with a large, extremely shallow food and water dish (large enough to soak in, shallow so they don’t drown). Adult ornate box turtles may be kept in small groups in 30- or 40-gallon breeder tanks or commercially available turtle/tortoise tubs, or they may be kept outdoors in turtle pens at least 4 foot by 4 foot in size with 12- to 18-inch vertical barriers. It is vital that water dishes be kept very clean and changed regularly to avoid bacterial infections.

Ornate box turtles of all ages should have access to UVB fluorescent lighting, in addition to a spot lamp to provide a hotspot. If kept outside in a turtle pen, the access to regular natural sunlight negates the requirement for either of the above lighting elements. For indoor caging, both cool and warm ends should be provided with the ambient temperature being about 80 degrees Fahrenheit. A 75-watt spot lamp should be used to provide a basking site between 90 and 95 degrees, and the cool end should be kept between 70 and 75 degrees. Under no circumstances should a heat rock be used to provide the heat for a box turtle, as this will almost always lead to potentially life-threatening burns!

Like all American box turtles, the ornate box turtle is omnivorous. In the wild ornate box turtles actively hunt and consume grasshoppers, crickets, beetles and earthworms. Additionally, ornate box turtles will graze on low-growing vegetation, berries and even mushrooms. In captivity it is important to provide a varied assortment of foods, as the diversity of the ornate box turtle diet can lead to them being picky eaters. Commercially bred cockroaches in addition to crickets, mealworms, earthworms, hard-boiled eggs, ground beef and even canned cat/dog food (which should be your last choice due to the high fat and processed meat content) make for excellent sources of protein. Berries, sliced melon, mushrooms, mustard greens, collard greens and dandelion greens round out the vegetarian side of the menu. It is important to your ornate box turtle’s health to provide a rich calcium source for your turtles as well as a source rich in beta carotene or vitamin A. Therefore, insects should be dusted with a high quality vitamin and mineral supplement prior to being offered.

Ornate box turtles bred in captivity are more tolerant of handling than wild-caught or farm-raised turtles, but overall, ornate box turtles are not difficult turtles to handle. Also, turtles unaccustomed to captivity can be easily stressed and should be given a couple of weeks to settle in to their new situation prior to any regular handling. Caution should always be exercised with ornate box turtles as they are slightly more aggressive than other box turtle species and will not hesitate to bite in defense of a perceived attacker.

Ornate box turtles are very active, alert, and full of personality that other turtle species can sometimes lack. If set down on the ground, ornate box turtles will almost immediately explore their surroundings with a speed and boldness that captures the hearts of their keepers. This is not your “sit-and-watch-the-world-go-by” turtle. The ornate box turtle embodies every bit of the spirit and character that is associated with the Midwestern United States.

Ian Jessup holds a BS in biology and chemistry, with an emphasis in cellular/molecular biology. He is also the current vice-chairperson for the Rat Snake Foundation (www.RatSnakeFoundation.org), an international nonprofit dedicated to the conservation of rat snakes and the dissemination of information concerning their natural history and husbandry.