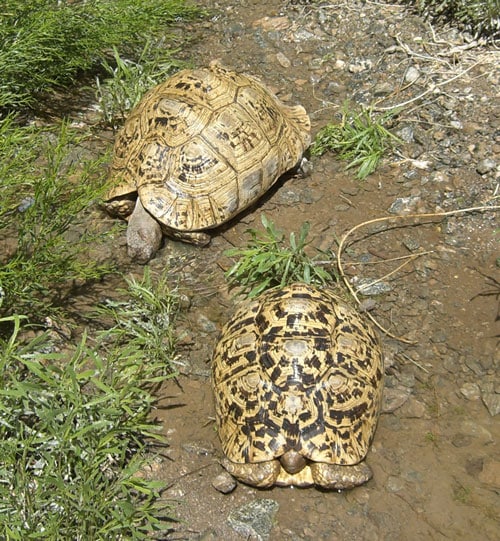 The leopard tortoise is the second largest tortoise native to Africa. Only the African spurred tortoise is larger. Two subspecies are generally recognized. Stigmochelys pardalis babcocki is the most common species in the pet trade. It has a large natural range resulting in geographic variations in size, color and temperature tolerance. Stigmochelys pardalis pardalis is from South Africa and Namibia. S. p. pardalis can be distinguished from S. p. babcocki as it is generally darker in color, may not be as high domed and generally grows larger.

Without knowing the origin of a leopard tortoise, it is difficult to distinguish adults of the two species due to the geographic variations of S. p. babcocki. Hatchling tortoises of each species are generally distinguished based on the number of dark spots on each scute. S. p. babcocki generally have one black dot or no dots, while S. p. pardalis generally have two black dots on each scute.

It is possible additional species of leopard tortoises will be described. There is a giant variation native to Ethiopia and Somalia, which is currently classified as S. p. babcocki.

Adult leopard tortoises measure from 10 to 18 inches long depending on the geographic origin and subspecies of the tortoise. The South African subspecies, Stigmachelys pardalis pardalis, may grow to 24 inches and the giants from Ethiopia and Somalia may approach 30 inches. Females often grow larger than males, however depending on the origin of the specimen this may be reversed, or male and females may be of similar size. Due to wide geographic variations there are no set standards. Males may always be distinguished from females by their concaved plastron and larger tail.

Leopard tortoises live between 50 and 100 years in the wild.

The preferred setup for adult leopard tortoises is outdoors. However, if you live in a climate too cold for such an enclosure, you may house the tortoise indoors. A pair of leopard tortoises can be kept in a 10 foot by 10 foot pen. The walls should be at least 18 inches high and may be made of wood, block or other material that prevents the tortoise from seeing through the wall. Leopard tortoises are not escape artists and do not climb, burrow, or display the aggressive breeding, biting and ramming that the Mediterranean species do. Multiple males and females may be kept together as they are not territorial like African spurred tortoises.

An outdoor enclosure should have a hide box and a variety of shrubs, grass or bushes to provide the tortoise with protection from the elements and a sense of security. A portion of the pen may be planted with grass or alfalfa for the tortoises to eat. Bare ground is also required because tortoises dig in the dirt to lay eggs. Some rolling terrain is recommended. Leopard tortoises often bask on slopes to maximize sun exposure or dig into slopes to lay eggs.

Adult leopard tortoises can be housed indoors in a stock tank, plastic pool or large tub. Although a pair of adult leopard tortoises could be maintained in an enclosure measuring 6 feet long, 4 feet wide and 1.5 feet tall, larger areas allow more time between cleaning and changing substrates. It is still recommended that the tortoise be housed outdoors when the weather permits.

If your leopard tortoise is only housed indoors at night or during brief winter periods, newspaper works as a substrate. For a permanent indoor enclosure, substrates such as grass clippings, peat moss or potting soil work well. Also include different microclimates, including a warm, moist hide box and dry area with a basking light. The size of the leopard tortoise also plays a role. Hatchlings are raised almost exclusively inside. This allows better monitoring of food intake, temperature control and protection from predators.

For indoor care of a leopard tortoise, temperatures should be maintained between 75 and 90 degrees, with a basking spot of 95 degrees. Depending on the indoor air temperatures, a heat light may be required at night or during the day for the tortoise to thermoregulate and raise its temperature to optimal levels for digestion. Exposure to natural sunlight or UVB light plays an important role in how the body absorbs and uses calcium. UVB light or natural sunlight allows the tortoise to produce vitamin D3. Vitamin D3 is critical to the tortoise in its ability to absorb and use the available calcium. UVB can be obtained from fluorescent tubes specially made for reptile use or from mercury vapor bulbs, which also provide some heat. If fluorescent tubes are used for UVB, a separate light may be required for heat.

In outdoor enclosures leopard tortoises may handle a wider range of temperatures, but once temperatures drop into the 50s at night or daily high temperatures fail to exceed 70 degrees, move tortoises indoors or provide heat. Heat may be provided with items such as ceramic heat emitters, infrared heat lights or “pig blankets” (a solid, flat piece of fiberglass with wire heating coils inside).

A small portion of the leopard tortoise’s diet may include fruits, such as tomatoes, apples, papayas, cantaloupe, honeydew, watermelon, strawberries, raspberries, grapes, mangos and bananas. Fruit should be no more than about 5 percent of the overall diet.

Although some tortoisekeepers supplement the diet with manufactured vitamins and vitamin D3, I have not found these necessary if the leopard tortoises are provided a varied diet and exposed to UVB light. Hatchlings should be fed daily and may benefit from food that is lightly sprinkled with calcium powder several times a week.

Leopard tortoises readily drink standing water. A shallow water dish may be provided, but check it daily, and clean it as required. The size of the water dish doesn’t really matter, however it shouldn’t be too deep where the tortoise could get stuck in the dish. Hatchlings may be soaked once or twice a week in shallow, warm water. They drink and often defecate in the water while being soaked.

Tortoises are not a pet for young children, and they should be handled infrequently. Leopard tortoises are shy and will withdraw their head and limbs. Over time, however, they generally learn to recognize their keepers and will come for food.

Leopard tortoises are not aggressive, so multiple males and females may be kept together. Females may lay one to five clutches of eggs approximately four to six weeks apart. Eggs are laid at various times of the year based on the origin of the tortoise. Clutch size ranges from six to 20 eggs.

Place leopard tortoise eggs in a plastic shoebox for incubation on a substrate of potting soil, vermiculite, perlite or peat moss. Incubation temperatures may range from about 82 degrees to 89 degrees. Eggs of tortoises from some locations may benefit from a cooling period of 30 days or more at 65 to 70 degrees to break diapause and allow the embryo to start development. If you experience poor hatch rates, a cooling period is suggested. Incubation may take 150 to 400 days.