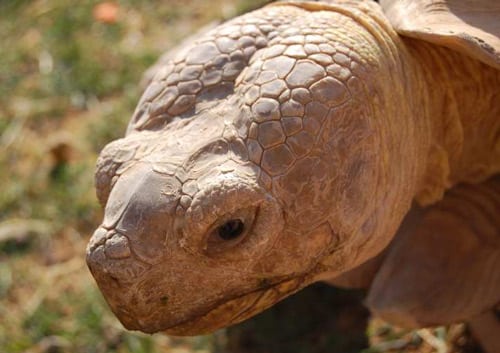 The most produced tortoises in the world are probably the sulcata tortoises of north central Africa. Sulcata tortoises are sometimes referred to as African spurred, African spur thigh, and just spurred tortoises. As recently as a few decades ago sulcata tortoises were rare in the United States, but they have shown an amazing ability to adapt to various climates and habitats in captivity, and their low cost combined with a curious personality make them tortoises that are commonly sought after by first-time tortoise owners.

Sulcata tortoises are bred on a large scale in the U.S., generally in the Southern states, from coast to coast, where it is easier to keep them outdoors year-round. Captive-bred baby sulcata tortoises are available from many sources, including; local pet stores, reptile expos, and directly from breeders.

Importation of sulcata tortoises has ceased, and any wild-caught animals would be large, older animals that are well established in captivity (most of which have found lifetime homes by now). Any young sulcatas that you come across would be captive bred in the U.S.

Pricing for baby sulcata tortoises varies depending on where you get them, size and age, and even the season (when larger numbers of babies are available seasonally, prices can drop for a short time). Once a sulcata is large enough to be confirmed a female, the price is generally higher for that tortoise because of breeding potential. Sulcata tortoises can also often be adopted from rescues or from families that are unable to care for a giant tortoise any longer. 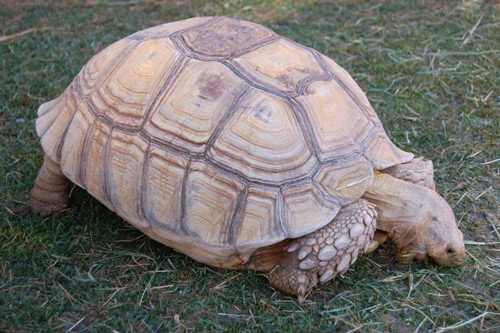 Sulcata tortoise hatchlings measure approximately 1½ to 2 inches in carapace length. Growth rates of sulcatas are probably more variable than any other tortoise. You could literally have a 10-inch tortoise that is 3 years old or 10 years old. Many adult sulcata tortoises break the 100-pound mark. However, most of the large sulcatas in our collection aren’t much over 100 pounds, but we do have a few. Our big female sulcatas tend to be in the 70 to 90 pound range, and are still growing slowly. These tortoises (males especially) can reach 200 pounds. Any tortoises nearing that weight would be very old. Sulcata tortoises grow rapidly for the first five to 10 years, and then their growth slows with age.

Because sulcata tortoises haven’t really been raised from birth for very long, it’s still hard to determine what age a well-raised sulcata born into captivity is capable of living to. Raised on a lean, high-fiber diet, captive-raised animals in low-stress environments have higher life expectancies. Most indications are that sulcata tortoises can live more than 70 years. 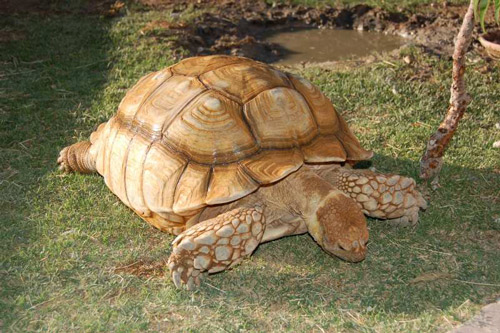 Because of their size, sulcata tortoises are best kept by those who have access to an outdoor area, where their tortoise(s) can be kept for most, or all, of the year. We keep our sulcatas in a desert-type setup outdoors with a large grass area in the center and dirt around the perimeter. They commonly “patrol” the perimeter of their enclosures, so we leave it dirt there, because any grass would just be destroyed with time.

Sulcata tortoise enclosures require a sturdy wall at least 24-inches in height above ground, as well as 12- to 24-inches below ground to prevent (or discourage) these tortoises from digging. Concrete masonry blocks work well when cemented in place, as well as a well-built wood wall as a barrier. See-through fences and walls shouldn’t be used, as the tortoises tend to try to escape through or over these walls.

Sulcata tortoises are burrowers if there isn’t a proper hide box accessible as a cool retreat during the summer months or a warm retreat during the winter. There are exceptions to every rule, though. When the tortoises make efforts to dig, these spots should be filled in with large flagstones, etc., to prevent future digging. A single tortoise can be allowed to burrow naturally, but with multiple tortoises in an enclosure, they can “stack up” in the burrows, and the deepest ones will be unable to exit.

Sulcata tortoises are grazers and will eat any grasses and most plants in their enclosure. We plant any of the various clump grasses as well as desert-type mesquite and African sumac trees, which also make for nice cage décor. Fragile plants are likely to be destroyed by the tortoises once the animals have any size to them.

Young sulcata tortoises can be raised indoors. While outdoor housing is preferred anytime the temperatures are in the acceptable range, many people raise their sulcatas indoors for the first few years of life. Probably the best enclosures to use are simple plastic sweaterboxes, or a “tortoise table,” which you can buy or make yourself. The container itself isn’t as big of a deal as the furnishings you put into it, including substrate, lighting, temperature gradients and cage furniture. In cold climates, a suitable enclosure can be built in the garage for large tortoises that need to spend a few months indoors during the winter. These enclosures should be heated enough to keep the tortoises comfortable during the indoor months. 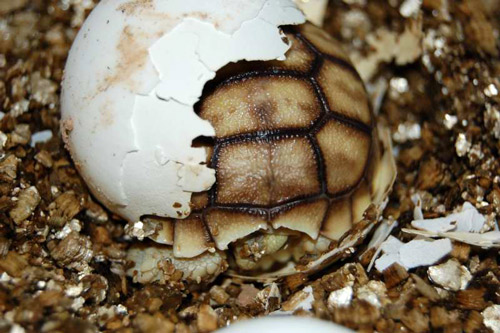 All of our baby sulcata tortoises raised indoors have access to a humid hiding area where they can snuggle in and get a dose of humidity, much like they would in a natural burrow. This humid microclimate helps their shells to grow smoothly and helps in keeping the tortoise hydrated. Tortoises raised without proper humidity tend to dehydrate quickly and form “bumpy” shells as they grow.

Many different substrates can be used in indoor enclosures. For all sizes of tortoise, cypress mulch has proven to be a great bedding. It’s absorbent, safe and relatively low cost. Other options are various hays (timothy, Bermuda, alfalfa, orchard grass, etc.), as well as coconut coir or peat moss. Outdoor enclosures don’t need fancy substrates, provided the soils that are there are mostly natural and not tainted with chemicals or fertilizers.

I also include a few large, flat rocks in an indoor enclosure. They help file down the tortoises’ nails and give them a clean surface for food.

Sulcata tortoises that live outdoors are tolerant to various temperature ranges. High temperatures are not going to be a problem provided the tortoise has a shaded area to escape to if desired. The tortoises themselves can handle surprisingly cold temperatures, as low as 45 degrees Fahrenheit, with no problems. When nighttime temperatures drop below 50 degrees, a heated hide box should be provided that maintains at least 55 to 60 degrees at night (70s is better), or the tortoises should be brought in during those times. Sulcata tortoises are kept outdoors year-round in some parts of the country where nighttime lows in the winter are 20 degrees (including here in Las Vegas). It is absolutely required that these tortoises are checked on each evening to make sure they get into a heated area and do not fall asleep out in the open and become exposed to these temperatures at night.

Indoors, sulcata tortoises can be maintained at normal room temperatures: 68 to 80 degrees. They should also have a basking area heated by an overhead light. This spot should be in the 100-degree range. Like most diurnal, herbivorous reptiles, they need a UVB light in their indoor enclosures to help them properly process the calcium in their diets. Keep lights on 12 to 14 hours a day, and turn off all light and heat sources at night.

Sulcata tortoises are eager eaters, rarely turning down a meal. With adult tortoises, the best staple diets are various grasses and leaves, the same as their natural diet. They will graze on any of the lawn grasses, mulberry leaves, grape leaves, hibiscus leaves and flowers. With size, most sulcata tortoises will eat grass hays (we like orchard grass hay). Baby and smaller sulcatas have a harder time eating the tougher grass and hay because of their less powerful jaws.

We also use spring mixes (particularly with baby sulcata tortoises), which have several leafy ingredients in them, and we supplement with kale, collard greens, turnip greens and any of the darker lettuce types. Cactus pads have become a major part of the diet of many of our tortoises as well. Mazuri Tortoise Diet is offered occasionally to cover any of the nutritional bases that the other diet may have missed. Variety is the key. Feed tortoises from a grass surface, flat rock or concrete, or from a tray. To prevent them from eating soil or rocks, never feed tortoises directly from a gravel or dirt surface.

Sulcata tortoises can have small water dishes in their outdoor enclosures. We use shallow, low-sided dishes that are glazed to make cleaning easy. Cleaning must be done on a regular basis, as most tortoises tend to soak in their dishes and defecate in them. I provide water bowls during the hottest parts of the year, but I don’t during cooler times. We also provide small “mud holes” and puddle-areas where the tortoises can sit in to stay cool during the hot months. Tortoises living in areas with regular rainfall drink from puddles and leaves. If you live in areas with prolonged dry periods, such as Las Vegas, offering them water helps to keep them hydrated.

When sulcata tortoises are housed indoors, I prefer not to have standing water in the bowls, because they tend to defecate in them while soaking. In shallow water, the tortoises usually begin drinking immediately and flush their systems at the same time. They need to be soaked outside the enclosure in shallow, warm water once or twice a week for 15 to 30 minutes to get fully hydrated.

Baby and juvenile sulcata tortoises tend to dry out much quicker than larger, more established tortoises. Because of this, I soak baby sulcata tortoises in shallow, warm water up to three times a week, for 10 to 15 minutes, whether they’re housed outdoors or indoors. 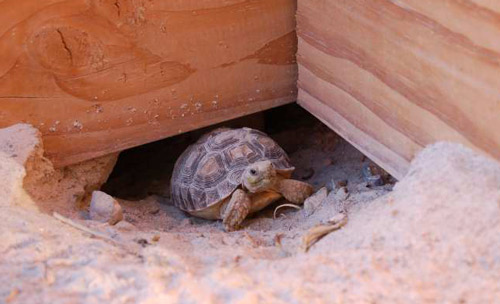 For best results, purchase an alert, active sulcata tortoise with bright, clean eyes, or buy one from a reputable source that will guarantee (at least) a live arrival. These tortoises can suffer from most common reptile health problems, but respiratory infections are the most prevalent.

Sulcata tortoises can also be prone to respiratory infections if they are kept in cool or wet enclosures. They need to be able to dry out, particularly if temperatures are low.

Contrary to what many sellers tell customers, tortoises generally should not be handled with any regularity. They are easily stressed when overhandled, and children tend to drop them when spooked. These stress factors can lead to a decline in a tortoise’s activity levels and health.

Adult sulcata tortoises are generally more resistant to handling, but all tortoises should be handled carefully. Avoid pinning them down or restricting them. Allow them to carry on in their intended way, especially when they’re young. Older sulcatas are usually pretty tolerant of people.

Tyler Stewart is the source for Sulcata Tortoise information. Please visit his site at www.TortoiseSupply.com.