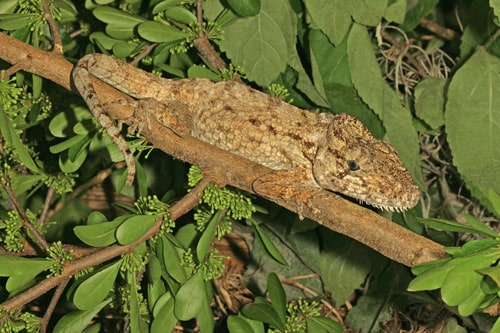 50K People Sign Petition To Stop Georgia’s Last Rattlesnake Roundup
Horned Lizards Released Back Into The Wild In Texas
More Than Half The World’s Amphibians In Danger Of Extinction, Study Says 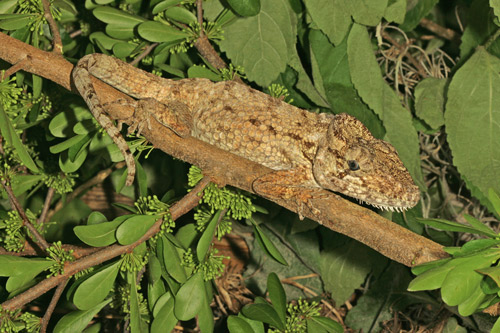 Cuban false chameleons (Chamaeleolis porcus) do best when they have thin branches to perch on.

Female Cuban false chameleons lay eggs in the sphagnum substrate; typically, they are completely covered and are about three-fourths of an inch below the surface. Single eggs are laid approximately every 30 days; however, I did have a female reach a peak of one egg every 10 days. This lasts for about seven months. Like other anole species, Cuban false chameleons are capable of delayed fertilization. I had one female Cuban false chameleon continue to lay fertile eggs for up to 6 months after being separated from the male. Be sure to supplement females’ calcium consumption so that egg production doesn’t deplete their health. This is easily done by dusting the crickets with calcium and vitamin D3.

Chamaeleolis eggs average one inch in length and weigh around 4 grams. I incubate my eggs on vermiculite, but perlite will do as well. I never really measure the water to get a specific water-to-medium ratio; I just add water to the substrate until I can use my hand to make a ball that will hold its shape after I let it go. Place the moistened medium in a clean plastic container with the Cuban false chameleon eggs positioned on the surface in the same orientation as they were laid. Push some of the medium around the egg so they don’t roll around. Place a plastic top on the container to prevent moisture from getting out and egg desiccation. Incubate the eggs between 78 to 82 degrees Fahrenheit, and the Cuban false chameleon eggs should hatch between 60 and 70 days.

Hatchling Chamaeleolis are very cute. They have shortened snouts and round heads with very big eyes. They average just under 2 inches snout-to-vent length and weigh around 2.5 to 3 grams. I keep babies in setups similar to those of the adults. A 2-gallon glass aquarium is a great size for one hatchling Cuban false chameleon. Place small twigs arranged at 45-degree angle across the length of the tank. Each twig should be three-fourths of an inch to just over one inch in diameter. You can use moist sphagnum moss for Cuban false chameleon cage substrate. I place a small stem of pothos ivy for security, to raise humidity and to provide a drinking surface.

Newly hatched Chamaeleolis are very susceptible to dehydration, so be sure to mist them with a hand spray bottle twice a day. In most cases, Cuban false chameleons won’t drink immediately, but after about 30 to 40 seconds, they usually start licking the perch or a leaf. I mist until the Cuban false chameleons stop drinking. After the first two weeks, I use the drip cup system. Like the adult enclosures, make sure the cage drains properly to avoid saturating the substrate.

Chamaeleolis quickly become conditioned to tong feeding and begin to attack the end of the tongs in a strong feeding response. It’s not necessary to tong feed, just be sure to leave some food in the enclosure for loose crickets to eat. Hatchling Cuban false chameleons are even more at risk of injury due to hungry crickets chewing on them. The animals grow quickly; one female offspring began laying infertile eggs at 9 months old.

Chamaeleolis are fascinating lizards. Larger than your typical anole, they are much calmer and less intimidating than the knight anole. Even though Chamaeleolis have some specific requirements, I believe most reptile enthusiasts will find them a relatively easy species to keep. I have experienced few medical issues with Cuban false chameleons. A few Cuban false chameleons had swollen eyes, but the issue always responded well to antibiotic drops. The most important things to keep in mind concerning Chamaeleolis husbandry are to keep the lizards hydrated and keep them safe from hungry crickets. Follow these suggestions, and you will be well on your way to having happy and healthy Cuban false chameleons.