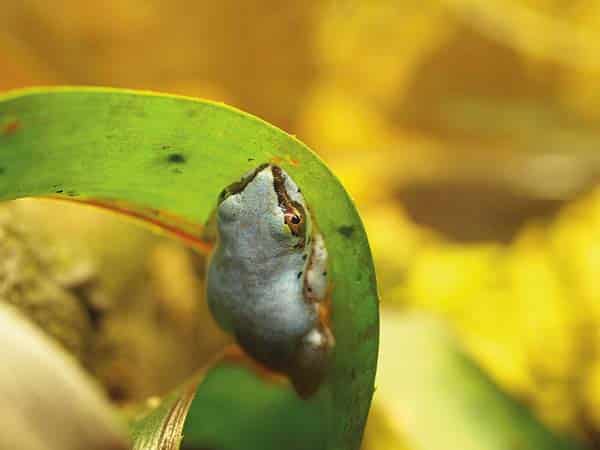 Brilliant and blue, Heterixalus madagascariensis is a frog worth breeding.

Picture a blue frog. Perhaps a poison dart frog comes to mind, or maybe an Aussie White’s tree frog. Less familiar to herpetoculturists, but equally stunning, is the Madagascar blue reed frog, also called the blue-back reed frog (Heterixalus madagascariensis). Under the right conditions these little gems glow. Like other reed frogs, it is capable of dramatically changing colors, ranging from crisp white in hot sun to drab brown at night or in a dimly lit enclosure. In the terrarium, H. madagascariensis most often displays the attractive, intense-blue color it is known for during the day when perched high near a light source. It measures approximately an inch in size, with females being slightly larger than males. 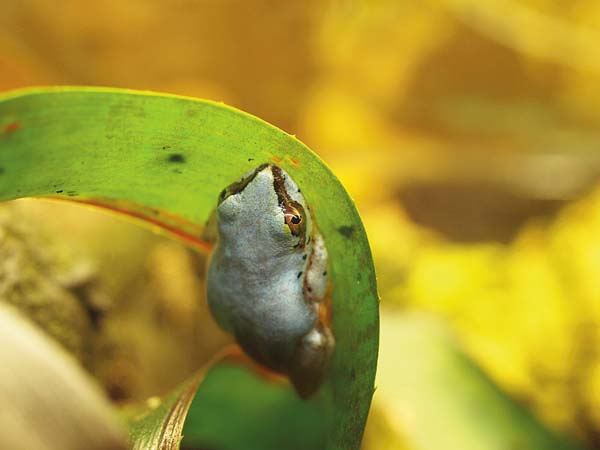 Maintain blue-backs between 65 and 85 degrees Fahrenheit, with the coolest temperatures occuring at night and the warmest near a light source during the day.

Native to northeastern Madagascar, blue-backs can be found in a variety of habitats, from the forest edge and agricultural fields to small village areas. While its attractive appearance may invoke images of picturesque waterfalls in pristine forests, this little blue frog is instead more of an open-savannah and swampland species. During the hot day, it sleeps, awakening as the sun sets to call and to hunt prey consisting of small insects.

Wild-caught frogs are more common, but there has been some captive-breeding success during the last few years.

Captive care for blue-backs is rather simple, but when starting with wild-caught individuals, it’s especially important to use proper acclimation and quarantine procedures. Keep newly acquired reed frogs in simple housing that allows them to easily be monitored. Only once their health is assured and they have adjusted to captivity should you move them to naturalistic enclosures and try to breed them.

I purchased a group of 10 wild-caught, blue-back reed frogs in October 2006 from a fellow frog breeder. These had been in captivity for some time, but they had not bred. At first, I housed the group in a 66-quart plastic storage container. To allow adequate ventilation and light, I cut a large hole measuring approximately 6 by 12 inches in the cover. Fiberglass window screen was then laid over the bin and the cover snapped back into place to cover the hole. Though small, I soon learned that H. madagascariensis is quite an active amphibian. When startled, these exceptionally agile amphibians can quickly run up the sides of their housing and bound out the top. I later switched my group to a terrarium with a door that opened on the front to help prevent such escapes. 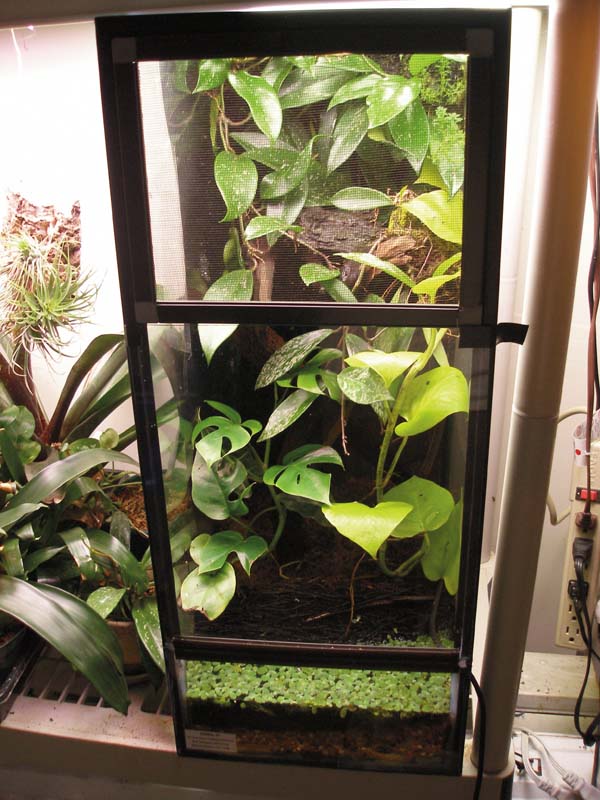 This 29-gallon aquarium tipped on end with a glass door and screening siliconed into place for ventilation, makes for a fine blue back enclosure.

Their new housing consisted of a standard 29-gallon aquarium tipped on end to increase its height, with a glass door and section of screen for ventilation glued in place on the front with silicone sealant. Tree fern panels were attached as a background, onto which I planted golden pothos (Scindapsus aureus), several bromeliads (Neoregelia spp.) and other hardy tropical plants. While H. madagascariensis will be at home in a simple setup with artificial furnishings, they are ideal candidates for a living terrarium because they do not produce a large amount of waste and seem to prefer the strong lighting that live plants also require. Across the top of their terrarium, I placed four T8 fluorescent bulbs, near which the frogs often slept during the day, turning ivory white to sky-blue in the moderate heat and intense light.

Maintain blue-backs at temps between 65 and 88 degrees Fahrenheit, with the coolest temperatures occurring at night and the warmest near a light source during the day. Mist the terrarium lightly with water daily to maintain a humidity level between 40 to 70 percent. Using distilled or reverse-osmosis water to mist with will reduce hardened water spots on the glass.

As a species that spends its time perched near water in the wild, H. madagascariensis should be provided with a sizable aquatic area in captivity. Specimens often dart into water when disturbed. A large water dish (around 6 by 6 inches and at least 11⁄2 inches deep) will be easier to keep clean than a smaller one, but if breeding is your goal, consider providing a naturalistic shoreline, where there are varying water depths and an assortment of aquatic vegetation for egg deposition. Parrot’s feather (Myriophyllum aquaticum) and small Anubias species are hardy and grow well in this type of setup. Remember to use chlorine-free water with amphibians. Tap water treated with an aquarium water conditioner and aged for 24 hours is usually suitable. 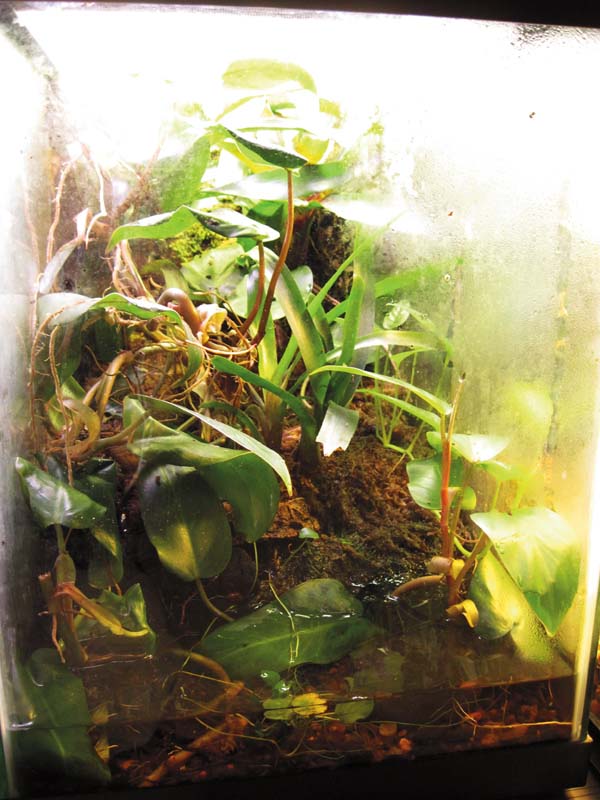 Although H. madagascariensis will be at home in a simple setup with artificial furnishings, they are ideal candidates for a living terrarrium.

My blue-back group has bred in two different terraria, both with a water area created by positioning rocks and tree fern panels to hold back a drainage layer of gravel or LECA (lightweight expanded clay aggregate). This area was then filled with water to the top of the drainage substrate, creating a gradually sloping shoreline leading to a water depth of 2 to 4 inches. Over the drainage layer, I have used moist sphagnum moss, leaf litter, coconut husk fiber or a mixture of these substrates, partially replacing them once or twice a year as needed. In a simple setup without live plants, the substrate will require more frequent cleaning.

Many small amphibians are difficult to maintain because they require a constant supply of tiny prey, but not H. madagascariensis. Though flightless fruit flies, bean beetles and other minute foods are relished, these insects are often passed up for larger meals when offered along with 1⁄2-inch crickets or house flies. I fed my group of 10 frogs 40 to 80 crickets every five to 10 days, with small feedings of the other above-mentioned feeders in between cricket offerings. Nutritional supplementation is critical to the long-term health of amphibians, so make sure to lightly coat foods in high-quality vitamin and mineral powders at least every other feeding.

Although blue-back reed frogs are nocturnal, captive frogs soon learn to wake up during the day when food is offered. This makes feeding the perfect time to observe and monitor a group to ensure everyone remains in good health, and to keep an eye out for signs of breeding activity, such as egg development in females. Eggs appear as a concentrated cluster of small darkened dots, and they can be seen through the skin on the ventral side at least a day in advance of breeding.

To breed a species in captivity, it is usually necessary to replicate the seasonal changes in temperature, humidity, water availability and food that the frogs experience in the wild. With this in mind, during the winter of 2006, I allowed the temperature to cool (often dipping into the low 60s at night) and the humidity to drop in the terrarium as occurred naturally in the room in which the frogs were kept. I fed them once every three to five days. As spring arrived and the temperature in the room began to rise, I sprayed the terrarium heavily each day, increased feeding frequency back to what it was in the maintenance stage (sometimes daily and with lots of variation), and watched anxiously for breeding activity. Unfortunately, not a single male called, and no eggs were laid. I repeated the process once more through the summer months, even moving the group to a separate rain chamber, but still nothing. With these discouraging results and knowledge that the previous keeper of these reed frogs had a similar outcome, I decided to focus on other amphibian projects, enjoying my blue-backs more as pets than as a potential breeding project. 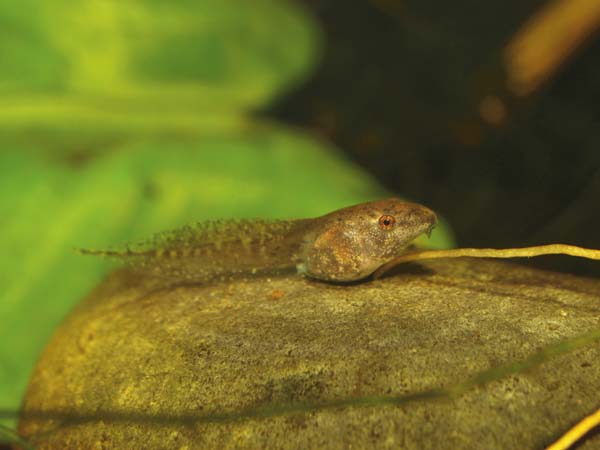 Most blue-back tadpoles complete metamorphosis after about four months.

As the temperature in the frog room started to cool with the onset of winter again, I began to hear occasional calls from the terrarium housing H. madagascariensis. Blue-back reed frogs have at least two call types, one that sounds like a creaking door opening and another loud, sharpened trill. Often they start quietly, creaking from concealed locations in the terrarium, and then eventually, they burst into long, drawn-out trills later in the evening. Only males call, which is the best way to sex this species. There also is often a slight size difference between the sexes, with females appearing larger and more robust in body structure than males.

The calling continued despite the cool winter temperatures and low humidity. In January, I walked into the frog room one morning to discover the blue-backs’ water area filled with hundreds of tiny black eggs. Strung over floating vegetation and smeared to debris at the edge of the water, the eggs caught me completely by surprise.

Using a turkey baster, I transferred most of the eggs to a small container containing 1 inch of aged and dechlorinated tap water. Within a week, tadpoles broke free and in another, they began to actively feed. I offered a variety of commercially available freshwater fish foods, including tropical flakes, frozen prepared diets and shrimp pellets, all of which were eaten with enthusiasm. I have also observed tadpoles scavenging on algae and biofilm that grows on the sides of the aquarium.

Aquaria size ranged from small, shoebox-size plastic storage containers to 51⁄2-gallon aquariums, with tadpole densities often being higher than 10 tadpoles per gallon of water. Water changes were performed at least every other day, with half or more of the water being replaced at a time. Tadpoles can complete metamorphosis in a little over two months at a water temperature in the low 70s, but most take closer to four months. Eggs that were not removed from the adults’ terrarium also developed into tadpoles and metamorphosed in the terrarium with minimal maintenance on my part. Interestingly, the frogs that developed as tadpoles with the adults morphed out larger and appeared stronger upon metamorphosis than the tadpoles raised in separate aquaria.

Since this first successful spawning, my group of blue-back reed frogs has bred each winter, and strangely, it takes place during the cool and dry months of the year. I suspect that this may be attributed to their wild origins. While January is frigid where I live in Wisconsin, with low household humidity levels and cool temperatures, in Madagascar, it is the rainy season. Perhaps these seasonal changes are still programmed into my group, but this is only speculation.

Even if my group of blue-backs does not follow traditional captive-frog breeding habits, they make exceptionally enjoyable terrarium subjects and have proven to be an incredibly rewarding frog to keep. Other Madagascar reed frogs, such as the starry night reed frog (H. alboguttatus) are also sporadically available, and it is worthwhile for the prospective amphibian breeder to give these colorful and charismatic little Heterixalus a try.

DEVIN EDMONDS has kept amphibians since childhood. He is working toward a degree in zoology at the University of Wisconsin-Madison to help him further understand these animals. He also runs a popular website about their captive care: www.amphibiancare.com.