Captive reproduction of boomslangs (Dispholidus typus) has occurred, but unfortunately it is not commonly done. Although they readily breed in captivity, the vast majority of “boomers,” as I like to call them, are wild-caught specimens.

Breeding can be induced with only a slight variation in temperatures. I typically remove the basking area, which provides heat at 88 degrees Fahrenheit, for three to five weeks. Otherwise I maintain the normal cage temperatures: 75 to 82 degrees. This slight change normally induces breeding activity in early winter (November and December) for me in South Dakota. Gravid females have been discovered in December through March in the wild. 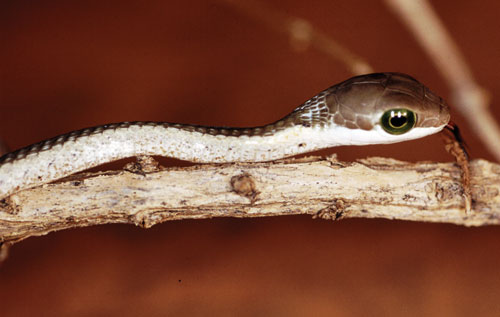 Boomslangs generally hatch in 65 to 80 days. Boomslangs aren't often captively bred but can be easily influenced to breed with only a slight temperature change

Gestation for boomslangs is about 60 days after copulation. Females lay upwards of 25 eggs about the size of a pingpong ball. These leathery eggs hatch in 65 to 80 days when kept at 88 degrees.

Baby boomslangs are quite possibly the cutest baby snake I have ever seen. They are 12 inches long with huge, round heads and eyes that appear to be the size of cannonballs. Very alert, they spend most of their time in the trees. It is always best to separate the young before their first shed, which takes place generally 10 days after they hatch.

Young boomslangs are very active and require regular feedings. They have an extremely high metabolism. After a few tricky feedings of young Anolis lizards, they generally switch readily to rodents. Feed hatchlings every three or four days to maintain good body weight and growth.

Interestingly, babies of either sex are a drab-brown and gray color. When they grow to about 3 feet in length, they go through an ontogenic color change and gain their mature, sexually dimorphic colors. Boomslangs reach sexual maturity at about 2 to 3 years of age. Females tend to remain drab-brown or slate gray, and males tend to be variations of green or black.

Want to read the full story? Pick up the August 2008 issue of REPTILES today, or subscribe to get 12 months of articles just like this.