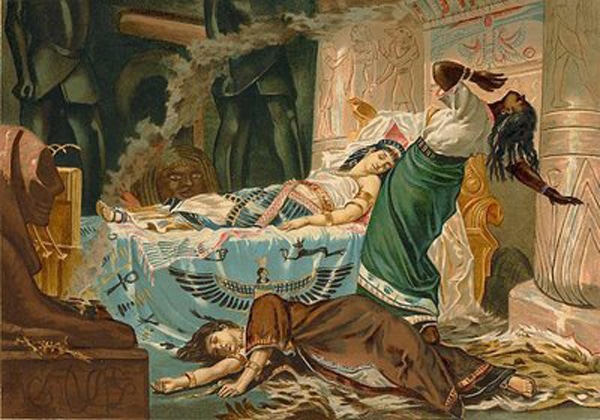 The death of Cleopatra and two of her servants were attributed to bites from an Egyptian cobra.

Cleopatra, probably the most famous queen in history was not killed by an Egyptian cobra (Naja haje) bite (as has been common lore for ages) Egyptologists and snake experts with the University of Manchester recently told the BBC. They claim that such a snake would have been too large to have been concealed in a basket of figs and in no way would such a reptile expend all its venom into Cleopatra and the two maids that were found dead alongside her. Cleopatra, born in 69 BC, was 39 when she died in 30 BC. 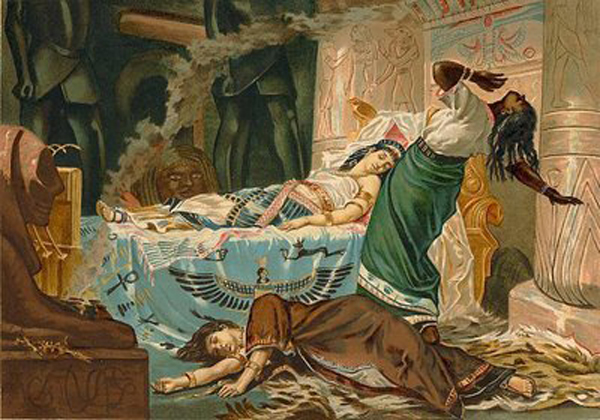 The death of Cleopatra as depicted by Philippine artist Juan Luna, 1881.

Since the age of the Romans, the queen’s death has been attributed to a cobra bite, poisons, and even murder. Andrew Gray, curator of herpetology at Manchester Museum along with Egyptologist Joyce Tyldesley say that the idea a snake that was probably 5 to 6 feet in length could not have been hidden in the way that legend portrays it. In addition, Gray said that most bites are dry bites, and to have a snake bite and inject enough venom to kill three victims one after the other would be impossible.

"That's not to say they aren't dangerous: the venom causes necrosis and will certainly kill you, but quite slowly, Gray said. "Snakes use venom to protect themselves and for hunting – so they conserve their venom and use it in times of need."

The Egyptian cobra is one of the larger cobras that can be found on the African continent. It can grow to more than nine feet in length, with averages lengths of about 5 to 6.5 feet. The venom of the Egyptian cobra attacks the nervous system and prevents nerve signals from being transmitted throughout the body, which eventually causes respiratory failure.